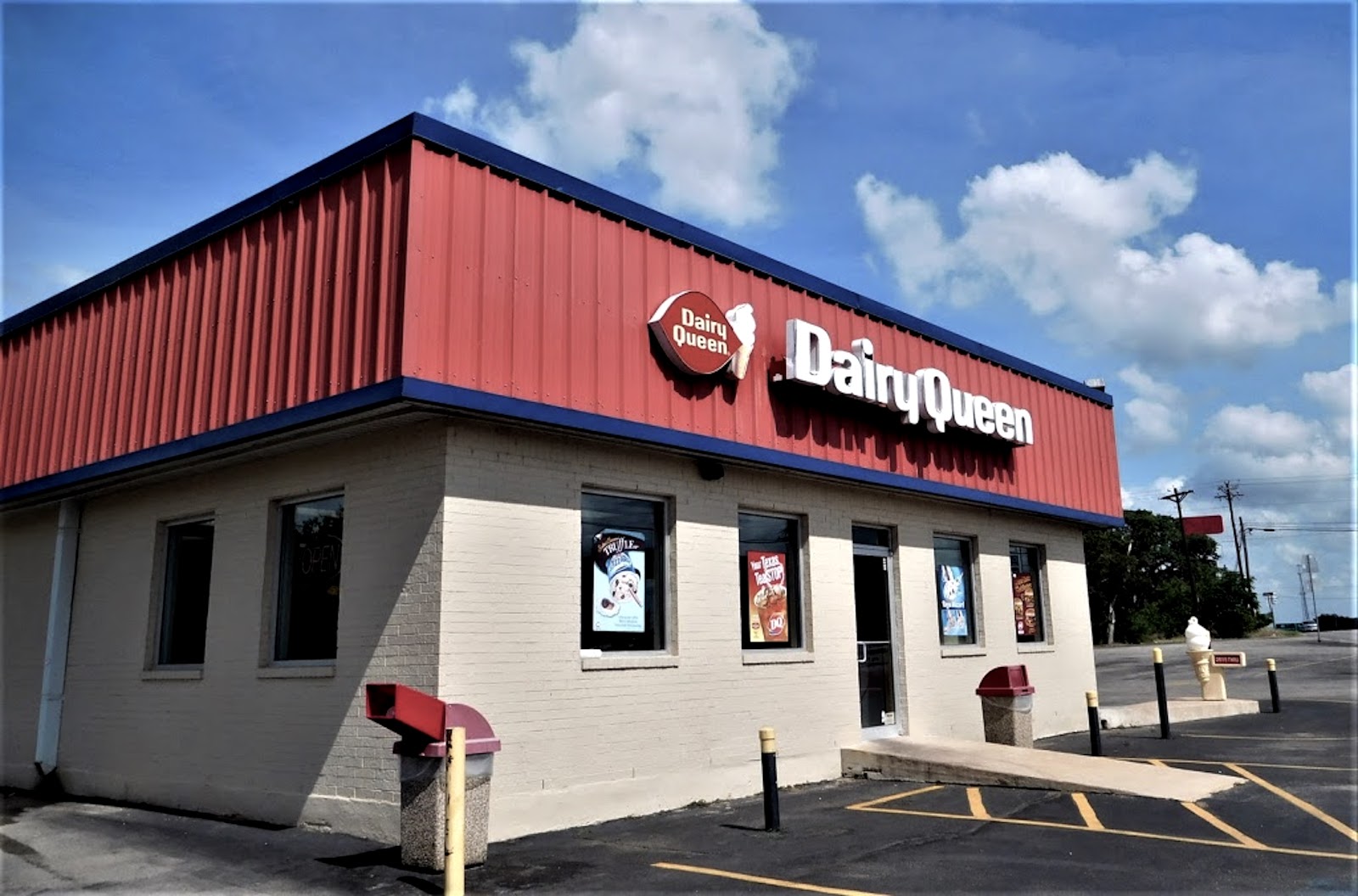 It’s how I spent my 4th of July. And how, despite the odds, one little Dairy Queen in Johnson City ended up serving the best fish dinner of the entire weekend.

At Texas Garage, we like to drive. We also like to eat. So diners, dives, drive-thru’s, and dance halls are all on our to-see list, and last weekend we nailed them all on a 4th of July road trip to visit friends vacationing in Kerrville.

It was a strange and fishy weekend. One of my good friends brought over fresh trout for dinner on Friday night and cooked it on the grill. On that Saturday, Alaskan halibut graced our dinner table, courtesy of Whole Foods. But the fish I will always remember came on the 4th of July, late at night in Johnson City, at that town’s only Dairy Queen.

We pulled into Johnson City, having survived torrential rains and a temperature drop that forced us to turn the heat on in the car. But mainly we were hungry, and the drive-thru at Dairy Queen was open. So not having dined off the food portion of the menu at DQ in years, I needed to make a quick decision.

And there it was! Alaskan haddock. Fish in a basket! Although it came in a box, not a basket. Two pieces of fried Alaskan haddock, accompanied by French fries and Texas toast. Sign me up!

Why I would order fish at a DQ in the middle of the Texas Hill Country is a mystery to me, even now. But I did. And it was excellent.

As my friend Vern used to say, “There’s nothing like food when you’re hungry,” and he was right. And while a good argument could be made that DQ doesn’t really offer food, I’m not going to make that argument. There’s many a summer night I find myself idling in line at one of several Dairy Queens here in Austin, waiting for a dipped cone, when I think it’s too far or too busy to drive to Sandy’s Drive-thru on Barton Springs Road.

Prior to arriving in Johnson City, we had driven thru rain outside Kerrville. It fell so hard and so fast that we had driven Highway 16 heading south into the foothills toward Medina, while thinking we were going north toward Fredericksburg. By the time we figured out our mistake, small town America was closing down for everyone to go and see the local 4th of July fireworks.

In Kerrville, Robert Earl Keen was warming up to perform his annual 4th of July concert, which is – let me assure you – a big deal. Streets were closed off. Traffic was rerouted. Lawn chairs were being setup in nearby parking lots. The police were everywhere directing traffic. And at the local diners, dives and drive-thrus, not a creature was stirring…not even a mouse. Everyone was walking or driving or riding their bicycle to the concert.

Back on Route 16, this time heading in the right direction, we steered toward Fredericksburg. But even in Fredericksburg the town was shutting down for their 4th of July fireworks. What-a-Burger was open, but it looked like the drive-thru lane traffic ended somewhere near Kerrville.

So we continued on toward Austin, getting hungrier by the minute. Until we reached Johnson City. In Johnson City one man was holding down the fort, like David Crockett at the Alamo, taking orders over the intercom in the drive-thru lane and cooking them simultaneously. Dairy Queen, the ‘Texas Stop Sign’, had saved the night.

Texas. You don’t have to have been born and raised here to appreciate it. The evening had been, as the day had been, an adventure.

The IH-35 corridor gets the headlines these days, especially around Austin. Traffic is heavy and truly annoying at times, and home prices are soaring. The price of progress can be high, and it often is.

But Austin, that blueberry in the strawberry patch, is only a small part of the Lone Star State. There’s a lot more to Texas than Austin. But when you’re stuck in traffic here in the capital city, that’s often hard to remember.

Driving back to Austin from Kerrville on US 290, I once again realized how small Austin actually is relative to the world around it. It was totally dark until we got less than 10 miles from downtown. We couldn’t even see the fish in a box we were eating, it was so dark. You had to determine if it was the fish or the fries or the Texas toast by touch, except for the rare occasion when a car passed by and reflected it’s headlights off the headliner.

It was a Texas I remembered, and yet seldom experience anymore. It reminded me that I didn’t move just to Austin, I moved to Texas, and I moved here 20 years ago, for Texas. I didn’t get here as quick as I could, but I got here – and am glad I am here.

The parts of Austin I really enjoy are the swimming pools and the swimming holes, the Barton Creek Greenbelt trails, the convenience of having stores like Costco and Whole Foods share the same parking lot. The local restaurants and hang-outs and ubiquitous food trailers that kept the bars alive during the pandemic are a plus as well.

But the days of having a local musician, or a local band at every eating joint in town, have long passed, replaced by mega-commercial offerings like ACL Fest and SXSW.

South Congress Avenue, for example, once a hive of illicit activity and shops that closed at dusk, is now a trendy zip code featuring destination stores that are usually found only in places like New York or Beverly Hills.

It’s a different Austin, one can argue. But what makes Austin is that it’s different. It’s not El Paso or Houston or Dallas or San Antonio. It’s Austin. It seems to reinvent itself every 20 years or so. And right now, for better or worse, it’s reinventing itself again.

The All-New 2022 Nissan Pathfinder First Look
GETTING ON MY HIGH HORSE – MUSTANGS I HAVE LOVED: NUMBER ONE
Event Calendar