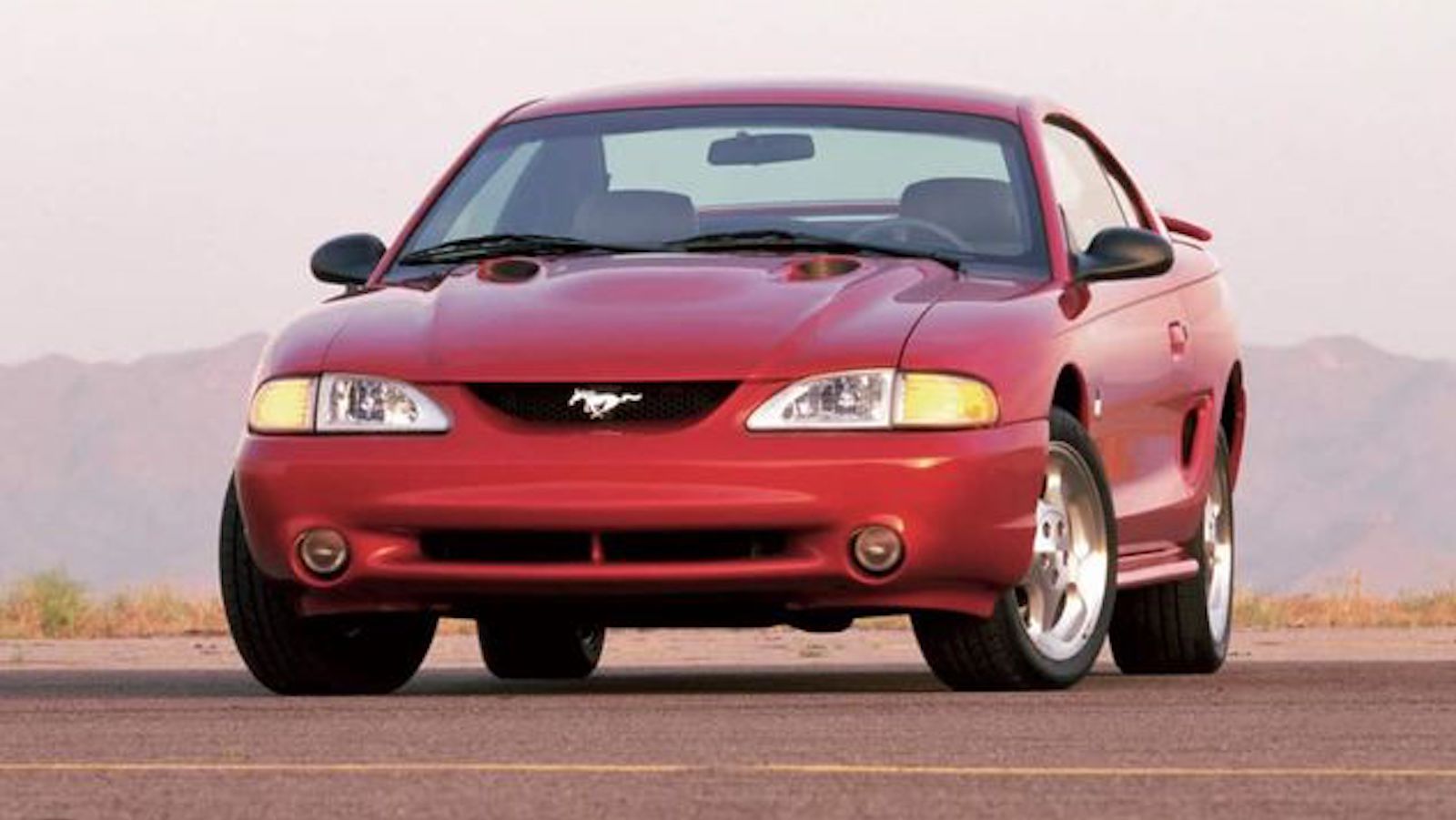 MUSTANGS I HAVE LOVED: NUMBER THREE

In 1996, about the time that GM struggled to launch its thoroughly strange EV1 electric car, I grappled with my own car dilemma. Granted, I wasn’t trying to save the world with a zero-emissions vehicle that looked part moon-pod and part prehistoric fish. I just wanted one of the ‘New Wave’ Mustang Cobras and ’96 seemed determined to stop me – just as it ultimately doomed the General’s EV1.

That year, Ford got pretty darn serious about the Cobra, jettisoning its longstanding 5-liter overhead-valve V-8 for a new 4.6-liter modular engine with double overhead cams, 305 horsepower and a, gasp, $24,810 base price.

From my poor-boy newspaper-reporter perspective, that looked like a number you’d see plastered on the window of a Ferrari – twice what my first Mustang GT cost in 1990. (Okay, that might be a slight stretch, but it seemed a breath-taking total back before Wild Bill Clinton redefined the term.)

Then, totally unexpected, my hard-working, vastly more prosperous brother stepped in. About six months earlier, he had bought a red ’96 Cobra as a weekend toy of sorts, a car he could play with on the narrow mule-trails – er, streets – of northern Virginia.

Somehow, though, he lost interest in the peaky, high-strung, manual-shift Cobra after a few months and decided it might suit my rough shape more comfortably. Even better, he also was bored with his Yankee banks, I guess, and planned to just essentially give me his polished, 3,000-mile Cobra.

Wow. It remains the best gift I’ve ever gotten, its equity still shining in my later ‘Stangs. And, boy, that car could shimmer. Dipped in a rich Italian shade of red, it screamed ‘special’ to me every morning – its lumpy idle filled my mid-century garage.

It was almost as good as a young girlfriend.

About the same size as the preceding Fox-body Mustangs, the blocky ‘96 Cobra wore fast, hard-carved sides. I never thought of it as beautiful, but like a lot of the women I dated back then, it was ‘interesting’, rolling on polished 17-inch wheels and 245/45 tires.

But I wasn’t quite King Snake. The overhead-cam 4.6-liter engines were the first factory cammers that Ford had dropped into the Mustang, and they needed tweaking and tuning. Although impressive in appearance – big, broad and silver – they had soft lower ends, a frequent liability back then with deep-breathing four-valve-per-cylinder engines.

I drove it with a heavy foot. While stout between 3,500 and 6,500 rpm, and able to click off mid-5-second blasts to 60 mph, the engine actually felt weaker on the street than Chevy’s ancient overhead-valve 350 V-8. However, my firm-riding Cobra handled better, was built more solidly and revved far more smoothly than the rough-edged Z. Its stiff clutch and five-speed gearbox also felt more sophisticated than the half-plastic Chevy.

Most days, it was a potent pleasure to drive. And maybe more important, it started Ford down a path that led to the Mustang’s current Coyote motors, the best overhead-cam 5-liter V-8s available for less than $40,000.

1967 Sunbeam Alpine: The Backstory
Getting On My High Horse – MUSTANGS I HAVE LOVED: NUMBER FOUR
Event Calendar