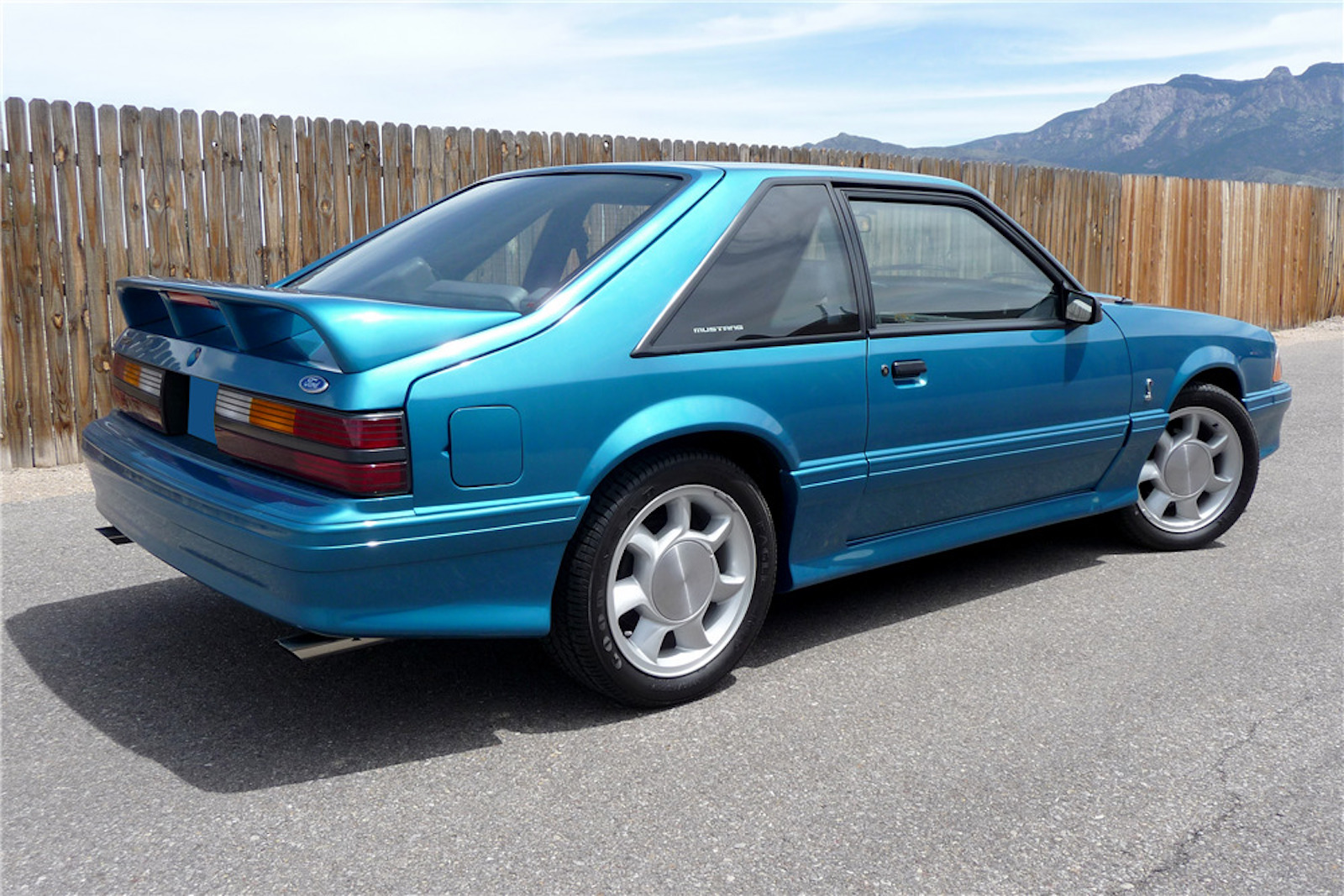 MUSTANGS I HAVE LOVED: NUMBER TWO

We’re very pleased to have Terry Box making what we hope is a regular contribution to the content of txGarage. Covering the automotive beat at the Dallas Morning News for 25 years, Terry supplied both the industry news and the industrial magic that is the automotive industry. His business reports were beautifully constructed, while his new car and truck reviews were highly anticipated. And with all of his success and recognition, he remains a damn nice guy. We’re very proud to have him, and hope he’s happy to have us. DB

Turquoise belongs in the late-afternoon clouds over New Mexico or on the glossy sides of a ’57 T-Bird. But never on a 1993 SVT Mustang Cobra, Ford’s first attempt at giving the 5.0-Mustang some sizzle with an engine upgrade, better suspension and decent brakes.

As you may recall, Dearborn had to build the Cobra. Chevrolet had finally awakened and dropped the potent new 5.7-liter Corvette engine — slightly detuned — into a sleek Camaro. Whatever. I wanted another Mustang, a car with more horsepower than my red 5-liter ’90-model LX and more personality than one of GM’s cold, corporate coupes. However, I faced a real dilemma in my second ‘Stang.

Ford’s SVT offered only three colors on the limited-production Cobra (about 5,000 were built): An ugly, orangey red; black, a color that makes absolutely no sense in sizzling Texas; and turquoise, like something in a hippie-dippie ring from California.

Ultimately, I swallowed hard and opted for an $18,500 turquoise Mustang Cobra with 235 horsepower, a 5-speed manual and good-looking 17-inch alloy wheels.

I never regretted it. Although the 3,000-pound ‘Stang was hampered by a sissy 3:08 rear axle, it was so much better than my ’90-model LX that I almost felt studly – well, as much as a short, skinny 43-year-old guy could.

Technically, the Cobra only had 10 more horsepower than the LX, a yawner even in 1993. But Ford often underrates its high-performance cars. The 5.0 in the Cobra sported deeper-breathing GT40 heads with better valves, a different, higher-lift cam and a revised intake.

While slowed by the econo-car rear axle, it could launch pretty hard with some rpm, rumbling to 60 in a reasonable 5.7 seconds, according to some tests. Moreover, according to third-party tests, its hot-rodded engine actually cranked out 222 horsepower at the rear wheels, suggesting loudly that the Cobra motor packed a bite of 260 or more horsepower.

Being the solid citizen I was, I helped it along with a set of Flowmaster free-flowing exhausts and a cold-air kit. If I had slipped a 3:55 diff into the car – which was beyond by paltry newspaper pay – I probably could have run with Chevy’s arrogant Z28.

As it was, the Cobra turned pretty aggressively into corners with a lot less body-lean than my ’90 GT, relying on its 245/45 tires for grip. It wouldn’t pull the g’s in curves that the new Camaro could, but it felt more nimble and lively – and more real.

Still, while way better than my ’90 LX, the car’s crude live-axle platform transmitted most road imperfections and all bumps into the Cobra’s uninspired gray interior, often rattling the car’s ill-fitting hatchback.

I didn’t care. I wasn’t looking for some dainty, oil-spewing English sports car that coasted to the side of the road in a cloud of smoke every other week. I wanted Detroit Iron. And the Cobra taught me one solid lesson: Buy as much horsepower as you can afford.

It was guidance I followed for the next 28 years…and eight Mustangs.

GETTING ON MY HIGH HORSE – MUSTANGS I HAVE LOVED: NUMBER ONE
1967 Sunbeam Alpine: The Backstory
Event Calendar