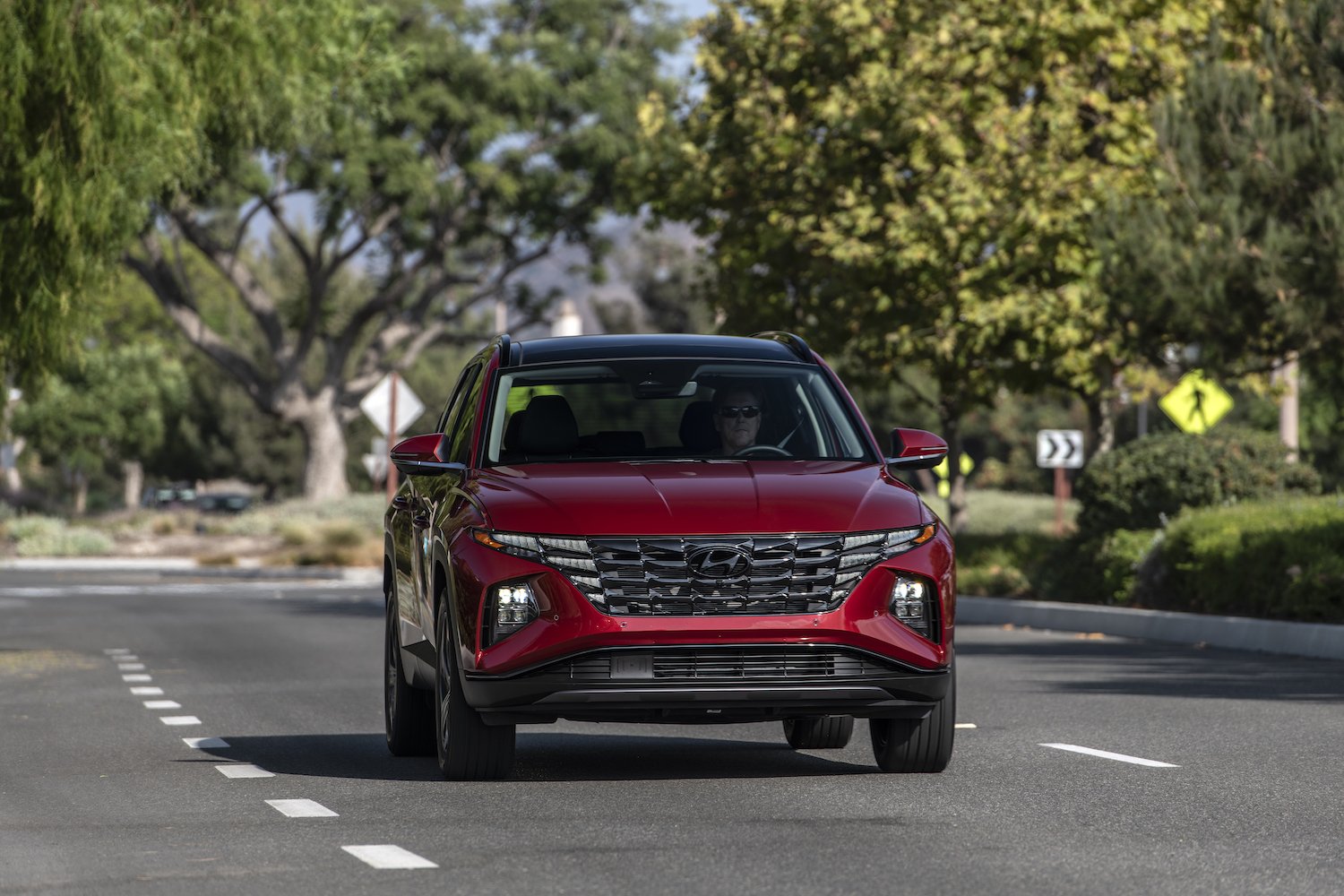 THE BEST TUCSON EVER*

*As suggested by Hyundai. We agree.

Compact crossovers are (literally) all around you. The recent proliferation of CR-Vs and RAV4s, along with – in admittedly lesser numbers – Nissan Rogues and Hyundai Tucsons leaves little room for the Civics, Corollas, Accords and Camrys of years past. Those sedans and hatches still sell, of course, but the compact crossover is, to channel Leo DiCaprio, ‘King of the World’. And there are thousands of couples with young families (and a lot of empty nesters) that wouldn’t have it any other way. So when Hyundai, responsible for the aforementioned Tucson, makes its most serious run yet at an aggressively growing segment, we’ll pay attention. We’ll even spend a week with it.

The Hyundai Tucson is as all-new as the descriptive suggests, from top to bottom. The standard drivetrain is improved, and both hybrid and plug-in hybrids are optional. And having recently driven the midsize Santa Fe, I was anxious to see what a prospect gives up when downsizing to the Tucson. In a word – or two: Not much.

The initial tip-off to the ‘all-new’ is in the walkaround. Whereas the last-gen Tucson’s sheetmetal was a tad tepid, the 2022 Tucson comes closer to making a real statement; in political terms, you might think of the ’21 as ‘Low Energy Jeb’, while in the newest I was thinking former governor Nikki Haley – or something like a Nikki Haley. This new Tucson is dramatically more expressive (Hyundai calls it ‘Sensuous Sportiness’ – really), while at the same time just a bit polarizing. In a walkaround shortly after the Tucson hit showrooms my wife was put off by the Tucson’s flared wheelwells and angularity, while I saw it as having a just-right stance and footprint. My own design reservation was with the Tucson’s alloy wheel design, which seemed way too busy, less than ‘sensuous’.

To the product team’s credit, unlike the RAV4, which has grown with each successive generation, the Tucson approaches growth in a measured (the pun’s intentional) way. Its overall length has grown six inches, while wheelbase is up by almost 3.5 inches, cargo volume is up almost 25% and passenger volume grows by six cubic feet. In your garage or a tight parking spot, the Tucson still feels nimble, whereas the new(ish) RAV4 seems almost midsize.

That growth is immediately evident inside, where everyone – except, perhaps, the middle passenger in the rear seat – is gonna’ be comfortable. In our we-still-are-in-a-pandemic environment you want your personal space, and there is nothing cramped within your leg, head or shoulder parameters. Obviously, the new Tucson won’t be cross-shopped with our ’06 Grand Cherokee, but the comparative expansiveness in the Hyundai would relegate the Jeep to where – today – it probably belongs: off-road, and not in the get-to-school commute.

Our Limited trim offered everything you need and, to my mind, nothing you don’t in its comfort and convenience features, with carpeted floormats the Tucson’s only added option. Leather? Check. A panoramic sunroof? Check. And all the tech expected from a 10.25-inch touchscreen? Absotively! To my regret, Hyundai is moving away from the totally-intuitive knobs it had been relying on, instead going to the touchscreen for almost all audio and HVAC functions; to the company’s credit, the redesign remains functional, but in the first few days of ownership bring along a 12-year old!

It’s only under the hood that the Tucson disappoints. The normally-aspirated 2.5 liter four is improved, but will let you down exiting turns when attempting to use roughly ½ the throttle. The result is limp. Given that Hyundai utilizes a conventional 8-speed automatic and not the frequently seen CVT, it’s not limp and revving like mad, but it’s limp – a problem we’ve experienced in both the RAV4 and Nissan’s new Rogue. The bottom line: The 2.5 liter’s 187 horsepower and 178 lb-ft of torque simply don’t have the wherewithal to give you inspired acceleration; it’s not dysfunctional, just disinterested.

Unlike, however, the Rogue, Hyundai gives you the option of a hybrid or plug-in hybrid. And with the hybrid, total system power is elevated to 226 and torque jumps to 258 lb-ft. Based on our recent test of the larger and heavier Santa Fe hybrid, the hybrid Tucson will be responsive, and might feel recreational.

The hybrid bump is cheap, just $1150 more than the conventional drivetrain in a Tucson Limited. If you elect to skip the Limited amenities, SEL Convenience costs just $32K. And the bump in the EPA estimate is a solid 11 mpg in the city – 26 vs. 37. It’ll pay for itself!