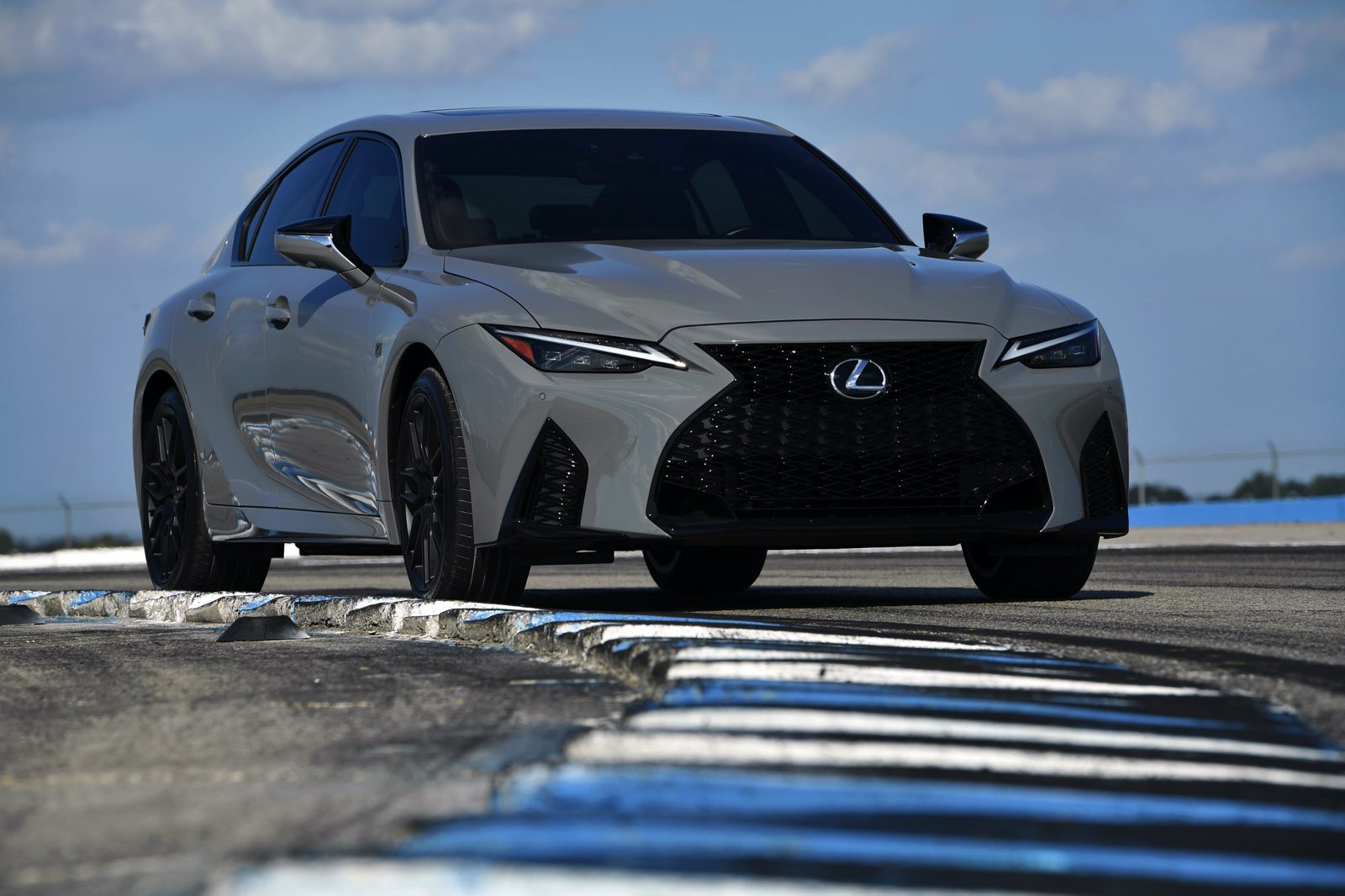 When shopping for a hot rod, the Lexus showroom wouldn’t be on your short list. As a longtime purveyor of luxury, refinement and (in its hybrid models) efficiency, for the performance enthusiast Lexus is rarely perceived as hot; in fact, ‘warm’ may be its highest, most deserving accolade. But there is – occasionally – a saucier sauce added to its more traditional recipes, typically identified by the company’s F Sport branding. And in an instance even more rare, the fun includes four doors. With that, let me proudly introduce to you…the Lexus IS 500 F SPORT, straight from Toyota’s luxury arm. It’s Appointment Driving.

From the git-go, know that within the IS 500’s 4-door architecture there’s little revolutionary, nothing suggesting a stock slide for Tesla or – for that matter – a reassessment by the ‘volk’ at Mercedes-Benz. This is hot rodding done in the traditional, almost SoCal way: Grab one relatively compact, non-descript 4-door, add a ¼-ton of muscle under the hood, and then manage the platform’s ability to stop and turn to an acceptable degree.

The recipe goes back decades. Among mass merchandisers, Ford would be among the first, adding its V8 early in the Model A’s product cycle. The result of that was a smallish car capable of outstanding performance, loved by both lawmen and the lawless. More recently, Chevy’s small-block V8s were big hits in the mid-‘50s, while Pontiac’s Tempest created a tempest (dubbed GTO) when the GM division added big cubes to an almost-compact platform.

Typically, the Europeans do it differently, with varying outcomes and markedly different price tags. BMW’s M Sport and Benz’s AMG add more displacement and horsepower, but typically within the context of significantly altered platforms and – this is important – significantly altered window stickers. In a recent comparison of BMW’s M3 and Alfa Romeo’s Giulia Quadrifoglio, both sported base window stickers in the mid-$70s and out-the-doors flirting with six figures. If you’re among the top one-or-two percent of wage earners in Europe or the U.S. those numbers don’t generate even a mild sweat. But if you’re not, you can read about ‘em and you can read about ‘em some more…but you’ll never own one.

With its IS 500, Lexus constructs a different business model. Into the 4-door IS platform, which already offers both turbocharged four and normally aspirated V6 powertrains, Lexus now offers an unblown 5.0 liter V8. In this installation it delivers 472 horsepower and 395 lb.-ft. of torque, while gaining only 143 pounds (less, probably, than your girlfriend!). In independent testing, this power, delivered to the rear wheels through an 8-speed automatic, will get you from 0-60 in but 4.4 seconds. It’ll even deliver an EPA estimated 25 miles per gallon on the highway, a number you might pitch to your wife. When, you know, you see her.

Beyond the addition of cubic displacement, there’s not much you’ll notice in the IS 500 when parked next to its lesser stablemates. Last year the IS 4-doors received, in the Lexus lexicon, a ‘slew’ of design and handling enhancements. Although this didn’t make for a new car, it made for a more competitive package in its segment. And those enhancements, which included a stiffer platform and revised suspension, had to make the V8 swap that much easier to justify and easier to execute.

When comparing the IS 500 to BMW’s 3 Series, you’ll find only small differences in its dimensions. But the impression of the IS gives is of a more traditional compact 4-door, and not one that’s crept into the midsize category. On today’s BMW showroom a 3 Series looks like the 5 Series, and the 5 Series converges on the 7 Series. Of course, no one continues to buy the ‘5’ or ‘7’; those people are buying Teslas. But in the toss-it-about sweepstakes the Lexus is the go-to car for the quick run to Starbucks. Or, for that matter, the quick run to Austin.

Those trips are enhanced, of course, by what Lexus has wrought beyond sheer horsepower. The F Sport’s Dynamic Handling Package, which is standard, includes Adaptive Variable Suspension and a Torsen limited slip differential. Brake cooling is enhanced relative to the IS 350, and the IS 500’s brakes are bigger, boasting a 14-inch diameter up front and 12.7 inches in the rear. But in a platform like this there’s far more to it than the numbers, in the same way that physical beauty can never be completely objective. In my seat-of-the-pants test, I’d give the IS 500 a five (out of a possible five!) pants rating.

Stylistically, the V8 requires a bump in the hood, a lesson taken from the folks at Chrysler, who’ve been bumping hoods since the mid-‘50s. And given the V8’s larger physical dimensions and the need to accommodate (presumably) larger accessory drives, the front bumper and fenders have been lengthened. That, to my eye, is the only visual negative here, as the Lexus grille is – stylistically – in your face to begin with. Now it’s even closer to your face!

At its $60K price point, the IS 500 overlaps with BMW’s M340i with a twin-turbo inline six, as well as a hard-loaded Genesis G70 with a twin-turbo V6. The Lexus is more old school than either, and its platform is more analog. It’s also, when compared to BMW, supported by a dealer network with (in my experience) better coffee in the waiting area. And with a Lexus there’ll be less waiting.