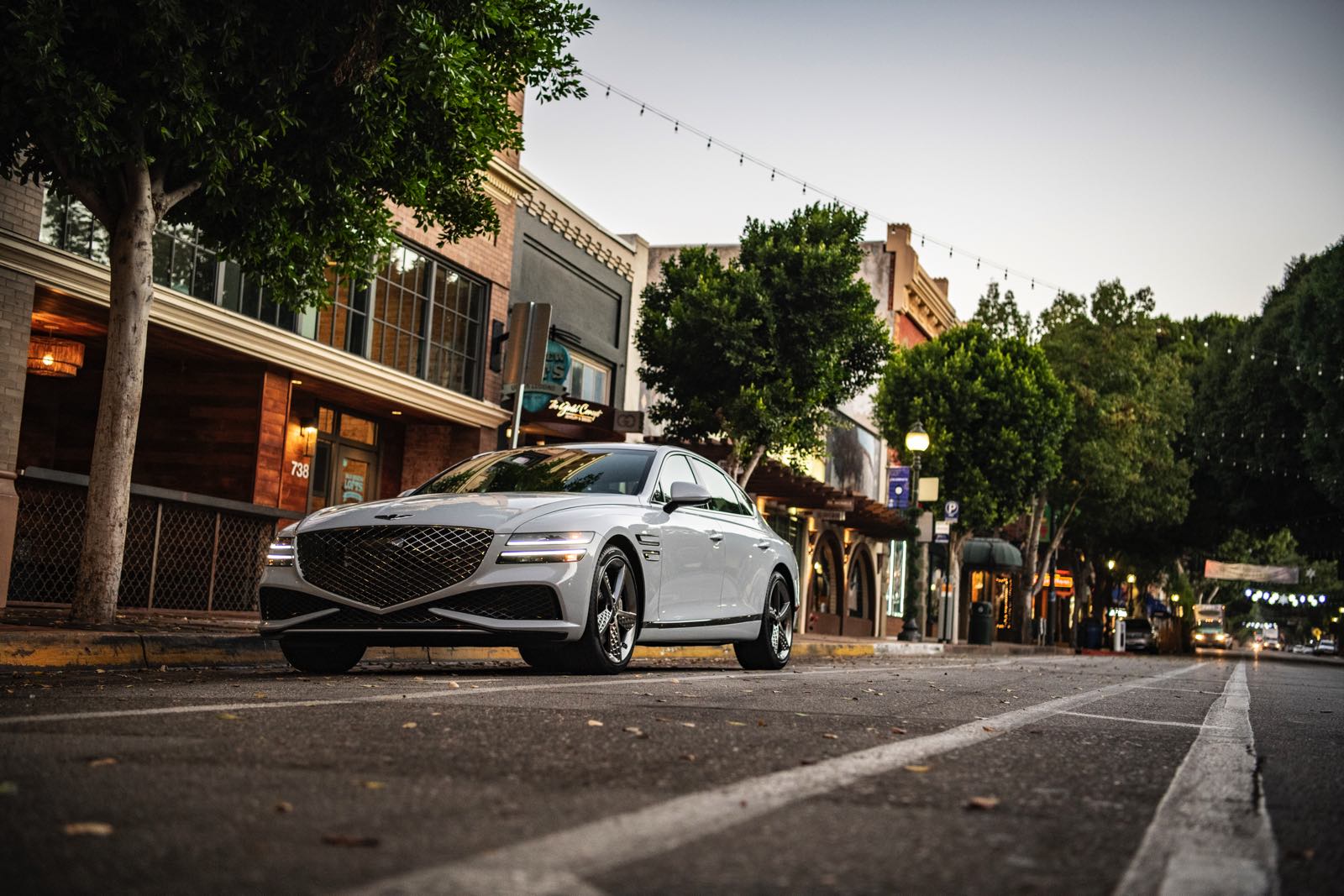 Recently, the National Automobile Dealers Association (NADA) held its annual convention in Las Vegas – ‘cuz new car dealers love Las Vegas. And if you follow auto industry news, you’ll not be surprised to learn that the EV shift was, as industry pub Automotive News put it, the ‘talk of the town’.

While the EV, whether offered with ‘pure’ electric power, hybrid or plug-in hybrid assist is deserving of your attention, together they still occupy a very small percentage of the market. And companies continuing to offer conventional drivetrains in – get this! – conventional sedans are, in a few instances, hitting it out of the park. One of those companies is Hyundai’s upmarket offshoot, Genesis. And one of its recent homeruns: the midsize Genesis G80, for those that think they wanted a 5 Series – and may eventually want a Tesla – but remain, for the moment,  open to alternatives. Conveniently, the folks at Genesis have several.

Without wanting to emulate the press release (that, of course, would pay too much), this midsize Genesis sedan had me at ‘hello’. With a rear-wheel drive or available all-wheel drive platform, the 4-door cabin sits well back on the G80 chassis, and with that rearward bias looks ready to launch. To this set of eyes, the impression is almost one of a 4-door coupe (Mercedes CLS or the smaller 4 Series Gran Coupe), but rear seat passengers aren’t asked to sacrifice rear seat space as they are in most  ‘coupes’. And with a wheelbase of 118.5 inches and an overall length of 196.7 inches, those passengers shouldn’t have to make a sacrifice; this is a luxury sedan with luxury levels of room.

In its sheetmetal, the G80 is intentionally upscale, but without the stylistic affectation that infects so much of today’s design. Again, I’d reference the CLS of some ten years ago, with more than a hint of Audi’s A7 in its profile. And while the G80’s greenhouse doesn’t remind you of an old Volvo, visibility is reasonably unrestricted. Of course, you have the obligatory cameras, but you’ll need them less here than in much of its perceived competition. If I was to make one suggestion, it would be to reduce the size of the G80’s grille – it’s a tad too much OH GEE!

Inside, supportive buckets in our Sport Prestige trim were covered in perforated leather, while the dash is dominated by 14.5 inches of infotainment screen. Apple CarPlay and Android Auto are standard across all trim levels. The touch points are good, and while audio and HVAC controls are more intuitive than is now typical, volume and tuning controls on the console weren’t designed for the ham-handed. (This, of course, isn’t a personal reference – simply a word of caution. And no hams were harmed during this test.)

Under the hood, buyers have their choice of a responsive turbocharged four with 300 horsepower or our test vehicle’s 3.5 liter twin-turbo V6 with 375 horsepower and 391 lb-ft of torque. The V6 is genuinely quick, with Car and Driver hitting 60 in just 4.7 seconds, and arriving at 100 less than four seconds later. While the numbers are exciting, so is the feel; the G80 supplies just the right balance – in my opinion – between visceral and serene. And regardless of speed, it drives smaller than its 4,500-pound curb weight would suggest.

If building your own (and in this environment, it’s not like Genesis dealers have dozens to choose from) you’ll find the base 4-cylinder comfortably under $45K, while our hard-loaded Sport Prestige with the V6 topped out at $71K. For most motorists the 4-banger would do the trick, and a mid-level trim can comfortably transport you for under $55K.

In Car and Driver’s competitive rankings, the G80 was ranked second to the Mercedes-AMG E53, a vehicle that starts on that side of $75K. It was also ranked higher than the Mercedes E-Class, Audi A7, Audi A6 and Mercedes CLS. (Notably, BMW no longer makes the top six in Car and Driver’s midsize luxury rankings.) With an abundant menu of features, real competence in its drivetrain and platform, and a price point closer to BMW’s 3 Series than the bigger 5 Series, there’s a lot to like here.

At this point Genesis is not offering a luxury buying experience, but you’re not buying the waiting room – you’re buying the highway. GIDDY UP!!!