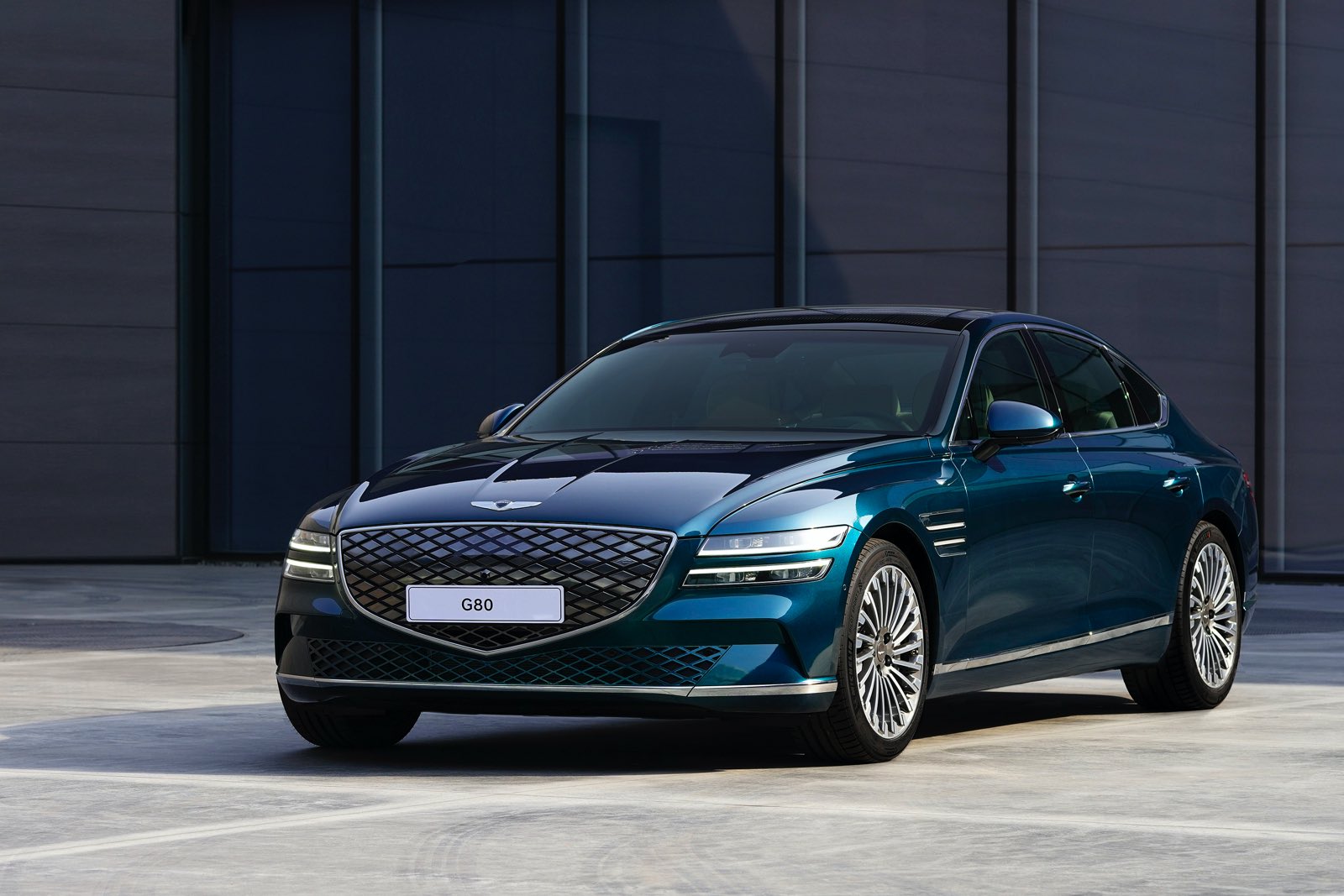 It is, parked on my driveway, utterly conventional in its appearance. And to be sure, in the (relatively) short time in which we’ve watched Tesla and its four models occupy our highways and byways they, too, have become utterly conventional, but in a way that makes them of this century and not – notably – the last century. With its Electrified G80 (yup, that’s what they call it – so that’s what we’ll call it…) Hyundai’s upmarket Genesis brand tips its toe into electrification with a midsize model looking almost exactly like its gas-powered sibling, what we’ll now call the Gasified G80. And that’s not a bad thing; as I’ve written before, the Genesis lineup represents an attractive alternative to ‘the Germans’ in its design, performance, quality and value.

Previewed at Auto Shanghai in April, 2021, the Electrified G80 was the first Genesis model introduced outside of its home market, South Korea. With its electric drivetrain located within what looks to be a completely conventional Genesis G80, the company’s midsize 4-door sedan, Genesis certainly didn’t make any waves via a far-reaching design or – to be frank – by pushing the EV performance/range envelope. Instead, they have created an EV of this moment and for this moment. And since most of us would seem to be living – and buying! – in this moment, that can’t be a bad thing.

In the walk-up, I continue to be impressed (if not exactly awed) by the G80’s sheetmetal. In its gas variant, the Genesis is intended to compete with BMW’s 5 Series, the Mercedes E Class and Audi’s A6. With two powertrains – a responsive turbocharged four and a very healthy twin-turbo V6 – the G80 gives you as much go from a gallon of premium unleaded as you’d hope. But if living in 2022 and thinking 2032, consuming premium unleaded is probably not part of your internal psychgeist. In its convention the Electrified G80 allows you to drive in this decade while transporting yourself into the next one.

With no significant changes made to the G80’s accommodation, you can anticipate ample interior room for five, while the adaptation of the battery pack and motors reduces trunk space to a comfortable volume for two. But then, those buying $70K sedans (the not-yet-official pricing for the Electrified G80) would typically have a three-stall garage, perhaps parking the wife’s Porsche on one side and an SUV on the other. For this consumer, the Electrified G80 should serve as an exemplary middle ground.

Once out of the garage and into the morning commute, the Electrified G80 is utterly sublime; if looking for a jolt of excitement, it’ll have to come from XM/Sirius. In going down the road, there is absolutely nothing impactful from under the hood or beneath the wheels, as hitting the start button dials up nothing but – as Seinfeld’s Frank Costanza would put it – SERENITY NOW! You dial up DRIVE from the console’s rotary dial (what – again – is wrong with a console-mounted stick and PRNDL?) and you’re off, with as much torque and resulting acceleration as your muddled morning mindset might ask for. Whether doing 8 or 80, it’s as if Rolls-Royce was selling training wheels for well under six figures.

Based on its rollout, the Electrified G80’s marketing campaign will be even more sublime than the car itself. The most recent example of same is a new TV campaign for the company’s midsize crossover, the GV80. In it, a charming kid asks her dad – at that moment he’s on a business call – “How big is the ocean?” Whereupon Dad puts everything on hold and drives her to the ocean. (For all we know they could have started in Kansas, but they drive to the ocean.) Despite constituting an essentially all-new brand with a still-fresh new model, in its utterly daft messaging (if ‘messaging’ is even the word) there are no details about the vehicle or its features…just the curious kid and her indulgent dad. So if you want to know about Genesis or its GV80, you’ll have to read the reviews.

As YOUR indulgent dad, I have one for you here. The Gasified GV80.