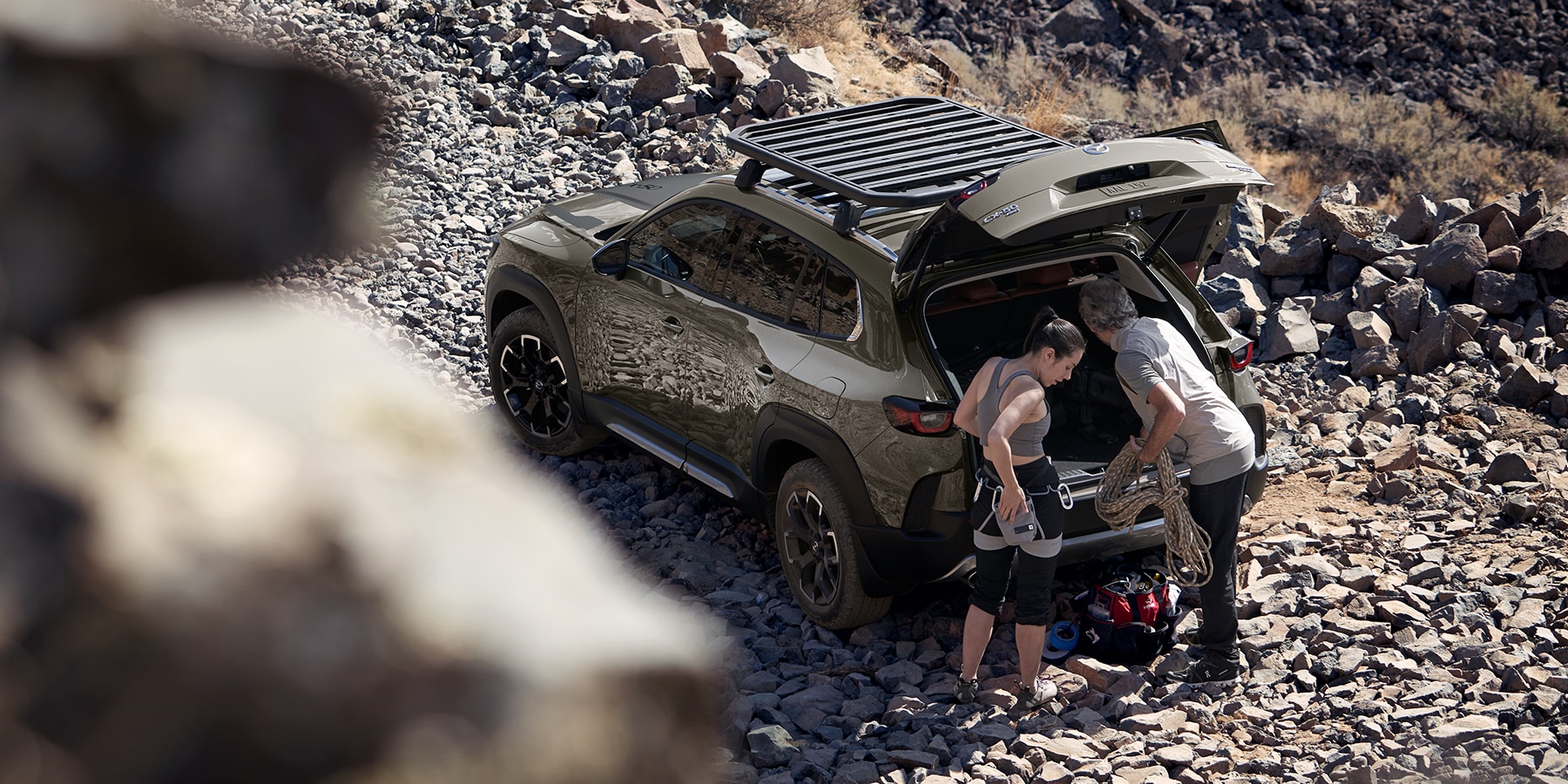 I knew what was coming…and it still took me by surprise. With the Mazda CX-50 (adding but one digit to the company’s CX-5 – and it’s a zero), the carmaker has constructed both a crossover and an anomaly for the Mazda showroom. Despite the similarity in the nomenclature, the CX-50 is more closely related to the company’s CX-30 and Mazda3 than to its current bestseller, the CX-5. And in its ‘butched-up’ sheetmetal and stance, it is perhaps the most aggressively sculpted Mazda product since production of the Ford Explorer-based Navajo(!) ended in 1994.

It’s been a couple of months since I first saw the CX-50 at – you guessed it – a Mazda store. That example was already sold, so there was no sitting or prodding; my exam was superficial, and far from super thorough. But in its almost wagon-like proportion, generous greenhouse and almost spare cladding, I could tell the CX-50 product team was on to something. The differentiation between it and the more urban space occupied by the CX-5 was immediately apparent, while its price point – think high $20s to low $40s – was essentially an overlay.

Two months later and it’s now in my driveway – and those initial impressions, now based on sitting, prodding and driving, are confirmed. Although some outlets perceive it to be in direct competition with traditional crossovers such as Hyundai’s Tucson, Nissan’s Rogue and Toyota’s RAV4, I’d liken it to Subaru’s Outback or (in the Mazda’s higher trim levels and elevated prices) Audi’s allroad; both the Subaru and Audi are essentially lifted wagons, promising credible performance on fire roads or snow…or, you know, snow-packed fire roads.

In the initial walkaround I was seeing the CX-50, coated in the company’s new Zircon Sand Metallic, as a meet-up between Porsche’s Macan and Toyota’s Tacoma. And let me explain: In its relatively low overall height and (for the segment) generous width, there’s a bit of Macan in its proportion, while the cladding and general demeanor could have been copped from Toyota’s Tacoma production line.

To Mazda’s credit, the end product is skillfully drawn, and I like the overall impression. The CX-50 sits well, with wheels and tires adequately filling the wheelwells, while overhangs front and rear aren’t excessive; especially notable is the CX-50’s front overhang, which seems intentionally pulled back when compared with other cars and crossovers in the Mazda lineup.

Inside, our Premium Plus trim, which supplies just about everything you might want (for a $42K plus destination sticker), impresses with Terracotta leather on the seats, a moonroof overhead, and a real attempt to keep me happy with an essentially analog dashboard. Of course, Mazda supplies a generous infotainment screen, along with Mazda’s less-than-intuitive controls for same. But the carmaker did provide the XM/Sirius subscription, so the experience wasn’t all bad.

The broadened shoulders of the CX-50 interior carry over inside, where the CX-50’s width seems to provide room for – again, you guessed it – broad shoulders, more front legroom than is often seen in small SUVs, and real rear legroom for adults seated in the back. It is, in short, a genuine passenger vehicle in a segment often designed for two adults and their two children. Numerically, that translates to 98 cubic feet of passenger space and 31 cubic feet of cargo room behind the rear seat. Flip the rear seat down and carry your bike with the front wheel installed.

Under the CX-50’s hood you have a choice of a normally aspirated 2.5 liter with 187 horsepower, or the available 2.5 liter turbocharged four (on upper trim levels) offering 256 horsepower. But really, there’s only one choice, as the 187 horsepower proves wheezy even in smaller, lighter Mazdas. With that, I found the 2.5 liter turbo in the CX-50 almost agrarian in its behavior, lacking the smoothness this same powerplant exhibited in the CX-9 and Mazda3 Turbo hatch – both recently tested. The less-than-refined feel was something you could live with, but still came as a surprise. Not surprising was the efficiency, with the EPA estimating 23 City/29 Hwy and 25 Combined. In real world driving figure low 20s – and if you need more, wait on an anticipated hybrid, which should be available soon.

The end result of the turbocharged drivetrain, with all four wheels driven through a 6-speed automatic, was exactly the sort of hookup you’d want in an all-purpose crossover. Given the 8.6 inches of ground clearance in upper trims you won’t be hopping boulders, but there’s enough capability here to get your mountain bike to the trailhead, or your kayak to the water. And again, with its relatively low height, you can reach the kayak!

The top trims, of which our tested Premium Plus is one, puts the CX-50 north of $40K – at which point you have some other choices. But if a fan of Mazdas (and I am), and wanting an all-weather wagon without spending Audi prices, the CX-50 provides a compelling choice in the crossover category. Hopefully you can drive one at a dealer, something I couldn’t do two months ago…