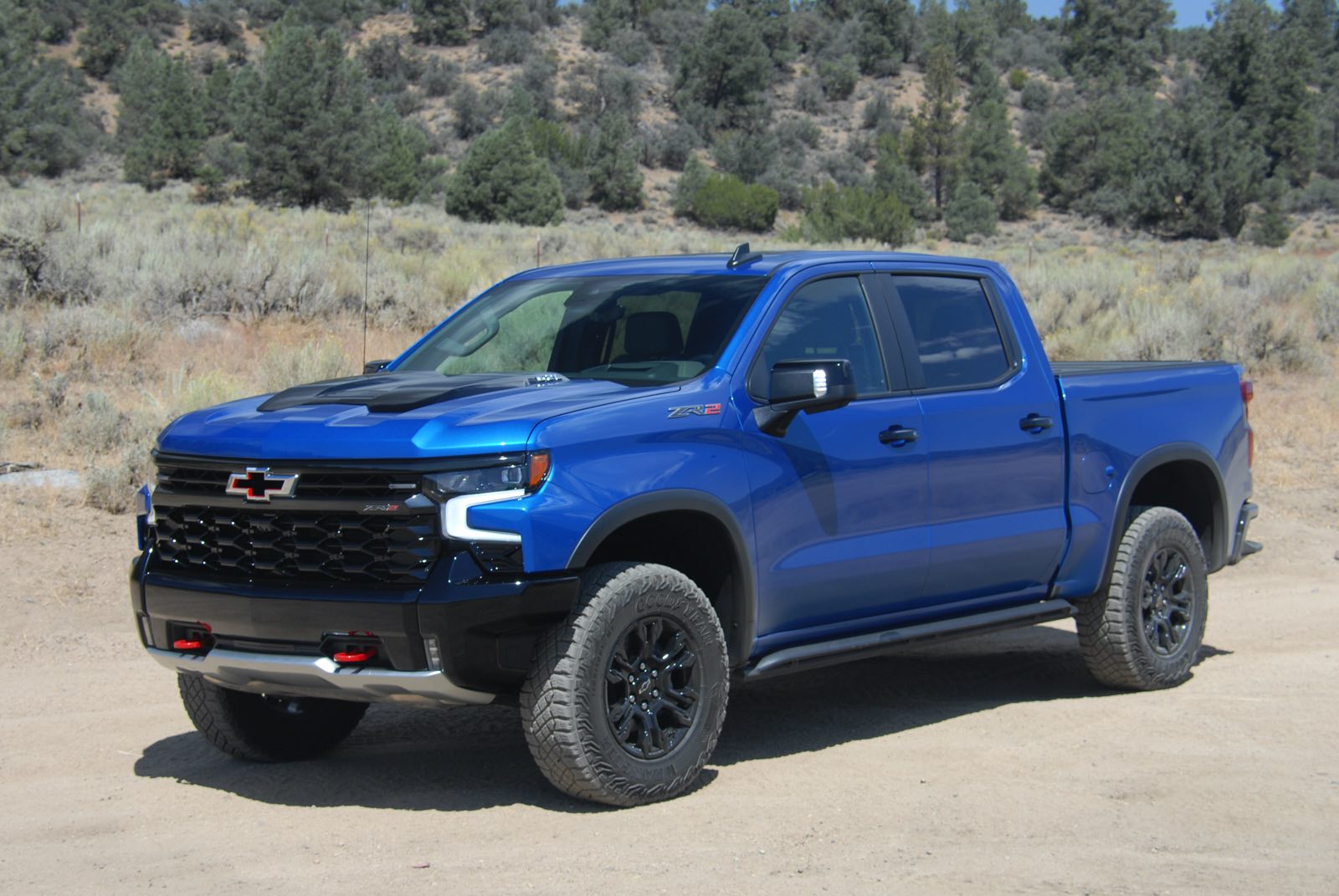 Nearly 30 years ago the Chevrolet S10 compact pickup got a ZR2 option. It was three inches taller, four inches wider, shod with 31-inch all-terrains and great fun to shoot up a dune and ride a sand wave down the face…as long as you could keep it cool. Subsequent ZR2 badges appeared on the cute-ute Tracker and the Colorado, but the full-size Silverado was worth the wait.

The baddest Silverado brings the obligatory cosmetic trim bits and everything required for speed over undulating terrain: 420-hp V-8, ten-speed automatic, stout tires with an identical spare wheel, unique suspension and front bumper (scalloped to avoid damage, removable ends for replacing damage) and myriad details like hidden and protected tailpipes. For slower, technical four-wheel drive work it has skid plates and locking differentials front and rear. Well equipped and $71,500 because of it, all you need add are “off-road high clearance steps” which are great as rock rails, marginal as steps.

Showing the pace of progress, the Silverado ZR2 is about 50% heavier than the first ZR2, 3.5 times the price, more than double the power and gear-count, carries and tows about 80% more and rates just one EPA mile-per-gallon less. “MPG” and “ZR2” should never be used simultaneously.

Some say the ZR2 is half an answer to a Ford Raptor/R or Ram TRX, but I disagree. Those may be faster on max-speed desert or field runs but all three will hit a top-speed limiter in less than 20 seconds, the Raptor and TRX are wider, pricier and in some cases thirstier—and if you think wider might not be a problem, add a few inches to either side on a tight trail, your apartment garage or the mall parking lot (we know you’re going). With the ability to carry an as-tested 1260-pound load or tow an 8900-pound trailer, the ZR2 is the most well-rounded of the bunch.

Consider the updated 2022 cabin, a genuine step forward in appearance, feel and function. Generous room for five, easy-access storage, 12- and 13-inch configurable screens for instruments and electronics, Google Built-In, optional head-up display and multiple USB ports…your lighter-socket radar detector or dash-cam requires an adaptor. There are plenty of cameras for all-around viewing, and the optional inside mirror camera does very well if you’ve a Great Dane in the back seat or obnoxious lights behind. Even better, all the safety systems and adaptive cruise control never gave me a false alarm, nor did the parking sensors go bonkers on a rock-strewn trail. The only amenity I’ve seen in a pickup not here was massaging seats, but I still felt fine after 11 hours at the wheel.

Power is plentiful and smooth with the appropriate soundtrack. The inverted putter shifter is more complicated than need be, requires shifting to L to enable shift paddles, and when I reached to adjust climate and a bump dropped my arm on the PARK button atop the shifter the truck went into park and set the brake while it was still moving: Nothing like lurching to a dusty stop in front of your friends for no good reason.

Suspension is an excellent compromise, allowing superb pothole-rejection and gentle highway miles—like an old Cadillac without the float, adept handling and getting down powerline-road washboard faster than the interstate adjacent. Although Chevy claims 9.8/10.6 inches of front/rear suspension travel, it feels like more and you’d really need a Masters in stupidity to max it out. Full-travel damping was so good I even looked underneath to see if it had hydraulic bump stops (it doesn’t). Whether or not you use “off-road” (fast) or “terrain” (one-pedal slow) drive modes, it’s just as capable on the slow-speed technical stuff, creeping confidently along, around or over what the trail throws at you. Here, or on pavement, if you feel any harshness I’d attribute it to the tires, not suspension, steering or lack of cab refinement. And at no point did I feel the “shuddering” often found in body-on-frame vehicles.

The ZR2 works as a pickup too, beyond the aforementioned load ratings. The optional “multiflex” tailgate does the Transformer thing for easier climbing in or making a load shelf, but corner bumper steps do the job if you prefer a conventional tailgate. The bed is properly lit, lined and drained, and there are 12 tie-down points…I was in tarp-monkey heaven.

I give demerits for the black hood outcropping—the hood is high enough already and the aft edge reflects way too much light at occupants–can you say flat black, Chevy? And when the driver has chosen to have the mirrors folded in and the front camera on,

especially in low-range, the truck should not get to override that regardless of speed.

If you’ve enough Velcro and floppy hats to join the overlanding crowd or just want to go camping a ZR2 would certainly work, but I would consider a Trail Boss instead. Unlike the smaller Colorado ZR2 this has no diesel option but the Trail Boss does, and for the $10K saved you could make some noteworthy upgrades and wander significantly farther than the gas-swilling ZR2 (EPA 14/17, 11/18 observed, 4 off the pavement). Besides, if you enjoy the ZR2’s speed potential you’ll shake up the Shiner Bock to detonation.