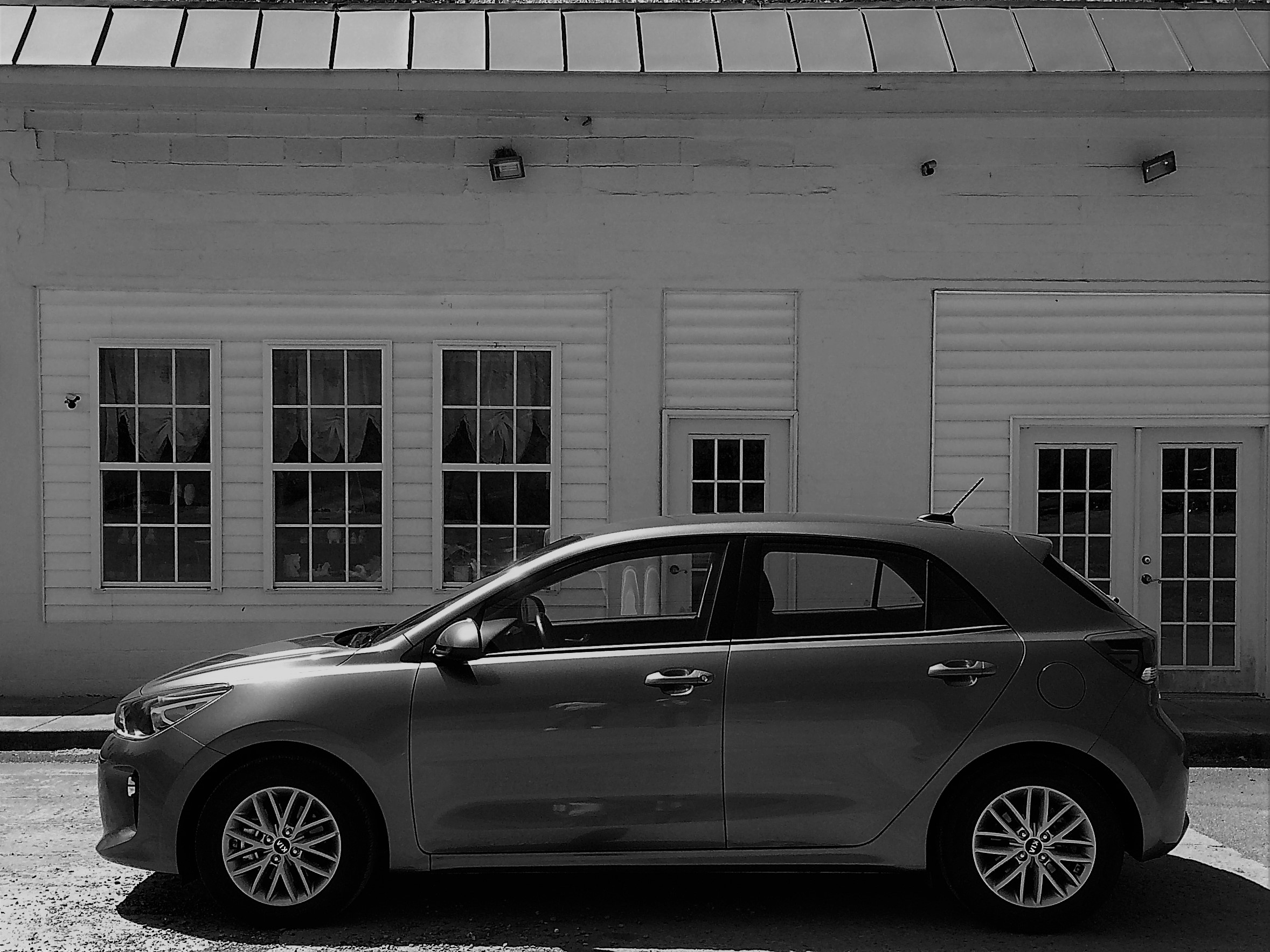 Some four years ago, we took a look at Kia’s subcompact Rio. And in that four years little has changed in the small, affordable car landscape – except, perhaps, that it has ‘grown’ smaller. Kia continues to offer its Rio, in much the same way and at roughly the same price point, as it was sold in 2018. And I continue to think it’s a helluva buy in accessible, economical transportation. DB

My first new car was a ’72 Fiat 128 2-door. At that time, on the abbreviated showroom of Towne & Countree Imports in Northwest Indiana, there were a few choices, including Datsun’s 510 and a gently used Datsun 2000. But the 128 was closest to my budget, had this understated (make that ‘way understated’) Euro design – a 3-box sedan with four wheels just about summed it up – and was the car, per the Fiat ads, that Enzo Ferrari drove. For about $2K, what could be better than that? And we think we’ve found, via Kia’s all-new Rio, the 128’s spiritual offspring.

Of course, we’ve done the math. It’s been over 45 years, and only-god-knows how many safety and emission regs have been written since Fiat attempted to supplement the Beetle in the hearts and minds of American consumers. Of course, Kia doesn’t have the Beetle to worry about (and certainly doesn’t have Fiat to worry about), but in trying to sell a small hatchback to a crossover-crazed America it certainly has its work cut out.

Within its subcompact footprint enclosing generous passenger room (90 cubic feet), this 4th generation Rio injects a mature, almost upmarket vibe into the cacophony that can be the subcompact segment; or, at the very least, a demo drive in the subcompact segment. According to Kia product exec Paul Fisher, “a large portion of the Rio market is in Europe. With that in mind, it’s no surprise that the Rio presents itself with a European flavor. The surfacing is very emotional…and the pushed back A-Pillar creates a longer hood, which suggests a slightly more serious and sporty personality…again, attributes of European cars.”

And since Kia’s design team didn’t attach to its exterior panels a collection of plasticized bits and pieces – faux this and vent that – there’s little if anything to cheapen the exterior. Also, given that the engineers opted for 15-inch wheels in a very reasonable 185/65 size, the Rio footprint doesn’t overshadow the wheel/tire combo, as can happen in many small cars. And does.

Inside, our EX – the top trim level – was equipped with the optional ‘Launch Edition’ (you know, as in ‘let’s do launch’). The $500 package adds a two-tone leather interior with a dash of color here and there, including – as you might guess – the dash. You will find the appropriate dose of hard plastics, typical of a small hatch with a base price of just $15K. But you won’t find anything offensive about those hard plastics, and will be delighted by supportive seats in front, a backseat designed to accommodate adults as well as kids, and an instrument panel as intuitive as these things can be in 2018. On the did-we-like-it-meter, the Rio’s interior registered a solid ‘9’ on our arbitrary 10-point scale.

Under the hood, the Rio is modestly – albeit capably – equipped with the corporate 1.6 liter DOHC four. With no turbocharger or supercharger, nor any hybrid (think Kia Niro) assist, its 130 horspower and 119 lb-ft of torque supply competent acceleration and capable cruising capability. Connected to the available 6-speed automatic (a 6-speed manual is also in Kia’s build box), the entire drivetrain punches well above its weight class. And no, you won’t find any drive, short or long, a highly caffeinated experience, but neither will you find it the slog so often found in cars and crossovers at this price point. We kept going back to a European vibe, both in the Rio’s start-up and on the road.

If working with Mr. Fisher, we’d argue long and hard for the 1.6 turbo and DCT currently optional on Kia’s Soul. With that drivetrain you wouldn’t have Volkswagen’s GTI, but you would have – with a modest firming of the suspension and (perhaps) 16-inch wheels and tires – an eminently tossable hatch that, at around the same $20K as our test vehicle, would undercut a comparably equipped Mini by some $8K, or $200 in the monthlies. It’d be a Rio with – if you will – brio. But know you can enjoy tossing this Rio around, day in and day out. And as often been pointed out, it’s far more fun to drive a slower car fast than a faster car slow.

Regrettably, we don’t anticipate anything in the way of a real marketing push from Kia for its Rio. Caught between the fervor for crossovers and Kia’s own Soul, you’ll have to ask about the Rio and hope the dealer has a few in stock. We’d happily take one to go…and then go.

The Lexus ES F Sport – PRETTY IS AS PRETTY DOES
TOYOTA’S GR86 – A LITTLE OLDER. AND WAY BETTER.
Event Calendar