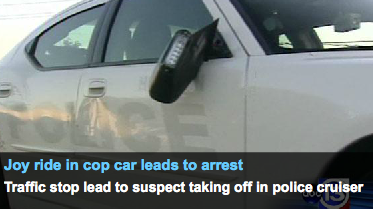 When are police going to learn?
Check out this news story from Houston, abc channel 13, about a suspect stealing a police car and running from the cops.

Suspect takes cop car for joy ride
HOUSTON (KTRK) — You could say it was a bit of an unusual chase on the southeast side Thursday night.

Police found themselves trying to catch up with a man who had just stolen a police car and took if for a joyride. That car and the driver were located in the city of South Houston, but police say what he did on the way there put other people’s lives in danger. It also was a close call for a wrecker driver and a gas station owner after that white stolen cruiser came straight at them.