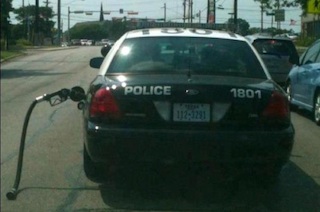 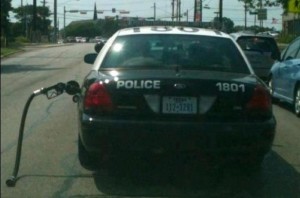 Yes this is a real photo and and it was in Austin, Texas. With all the distracted driving talks it just makes me wonder what was going through this policeman’s head to let something like this happen.

According to The Austin-American Statesman, this happened on Tuesday when a police car pulled away from a gas pump. A spokesperson for the police said no damage to the car or the pump occurred on account of a system in place for just this type of incident (it isn’t the first time we’ve seen such an event occur, but it’s the first time with a police car).

One thing is for sure, we’re more concerned for the safety of the citizens in Austin.