2013 marks the 30th Anniversary of the Houston Auto Show.

This year the event covers more than 700,000 square feet of space in the Reliant Center. Not only is this a big year for Houston Auto Show but it also marks the first time I was to attend an auto show as member of the media. My host to the show was Berry Lowman of #Motorama Live and I can’t say “thank you” enough.

As I walked onto the show floor, the first thing I was greeted with was a beautiful black and red 2013 Ford Shelby GT 500. What a great first sight. This year the show seemed to focus on “green” cars with emphasis being put on cars like Ford Fusion Energi, Toyota SEMA Avalon Hybrid and the Toyota ns4 Advance Plug-in Hybrid. 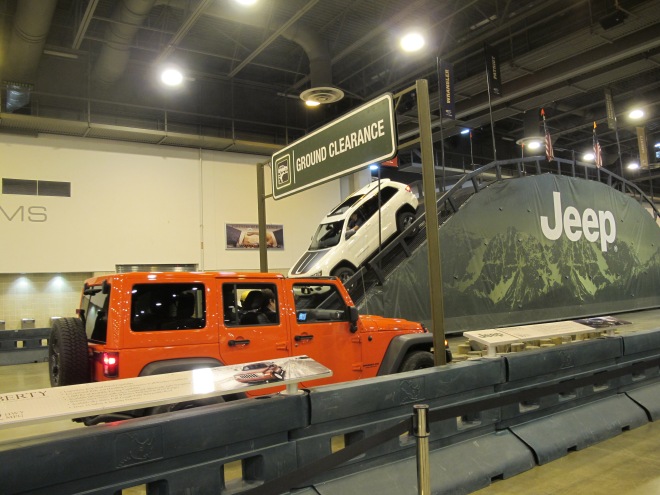 There is much more to the show than just “green” cars. However, Jeep might have stolen the show this year with Camp Jeep. This was a chance to ride in either a Grand Cherokee or Wrangler through a course that highlights the very DNA that makes up a Jeep. Jeep wasn’t the only company allowing ride and drive events. The parking lot was full of companies from Kia to Cadillac offering attendees the chance to drive one of their vehicles. I opted to take the Toyota Avalon out for a spin and was very impressed with the handling and smoothness of the car.

The layout of the show gave me the sense it was geared toward the average consumer as the few exotics that made an appearance were tucked off to the side. The exotics that did show up were Lamborghini with a Gallardo LP 570-4 Superleggera and an Aventador. Aston Martin with almost their entire line up, and Lotus with 4 different Evoras including a race car version. Aston Martin brought what I thought was the coolest display of the show. They showed off a cut up version of the Vanquish, allowing you to see the internals of the car and its construction. 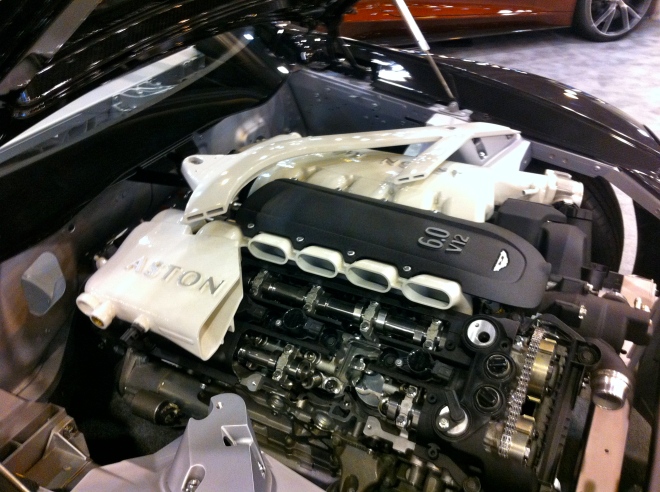 Perhaps exotics aren’t your thing, but you still like to feel like a celebrity. Well don’t worry the Houston Auto Show has you covered. There were a number of luxury manufactures there with some of the sexiest cars in existence. Brands like Audi, BMW, Jaguar, Lexus, Mercedes and others bringing out some of their best. My favorite in this group has to be the timeless and sexy Jaguar F-Type S that was on display. Many of the vehicles on the floor had power running to them so you could experience how the interior is lit up and the quality of the sound systems. Of all the vehicles I sat in, the Jaguars had the best sounding audio systems. With the smoothness and crispness of the notes coming out of the speakers they couldn’t be beat.

Maybe you aren’t interested in an uber-expensive Aston Martin, or driving around like the Queen of England in a Jaguar. Instead, you rather take a ride in something that can really get you places. There were plenty of off road vehicles to satisfy. Of course, Jeep was there with the brand new 2014 Jeep Grand Cherokee and their other products. The Jeep Grand Cherokee was awarded SUV of Texas by the Texas Auto Writers Association (TAWA). Along with the stock off road vehicles there were certainly plenty of after market off road vehicles including a very special storm chaser called SRC Dominator.

Let’s not forget that this is a consumer show and this is Texas. Trucks rule in Texas and the new 2014 Chevrolet Silverado and GMC Sierra are brilliant trucks. They have little details like LED lights under the bed rails to help you see when loading in the dark and an interior that is the best GM has ever put into any truck ever. The Silverado and Sierra certainly were the star trucks at this Auto Show. Well now Chevy and GMC aren’t for everyone. If you are a Mopar guy you will want to check out the RAM 1500 voted Truck of Texas. Finally Ford had all of their trucks on display with the exception of the new Atlas Concept Truck. Hopefully they will be able to bring it to Texas in the very near future.

The Houston Auto Show definitely had something for everyone. It was a wonderful experience and one I will not soon forget.

Check out @FastMINIRob on twitter for more automotive commentary from a Texas Car Enthusiast!
Also check out fastminirob blog