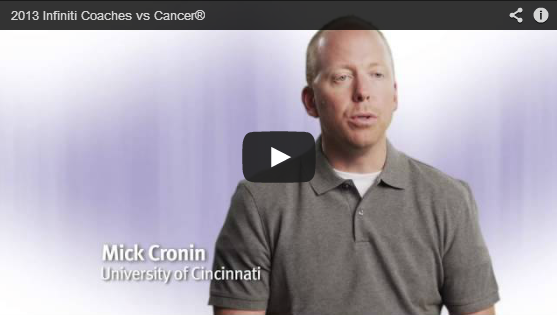 To tip-off NCAA® March Madness®, Infiniti is committing up to $700,000 in support of the Coaches vs. Cancer program, a collaboration between the American Cancer Society® and the National Association of Basketball Coaches (NABC). The program empowers coaches, their teams, and communities to join the fight against cancer by participating in awareness efforts, advocacy programs, and using the best team fundraising ideas to help people with cancer today and to find cures to end the disease tomorrow. With this contribution, Infiniti is the largest corporate supporter of Coaches vs. Cancer.

In addition, Infiniti is donating a set of tickets, along with a travel package for two, to the NCAA Final Four® via an eBay auction hosted by the American Cancer Society. The auction runs March 13-20 and is accessible by visiting ebay.com/americancancersociety. The winning bid will benefit the Society.

Also for the third year in a row, Infiniti is sponsoring the CBS Sports Bracket Challenge on CBS Sports’ website, and this year will send four lucky fans participating in the “Round by Round” and “Bracket Challenge” games to the NCAA Division I Men’s Basketball finals.

“Infiniti is excited to engage fans during NCAA Men’s Basketball, while continuing to support our partnership with Coaches vs. Cancer,” said Infiniti Americas Vice President Ben Poore. “It’s a slam dunk for everyone involved, and we thank every fan who participates for helping us donate again to this great cause.”

Infiniti will make a charitable contribution to Coaches vs. Cancer each time a fan submits their bracket choices at CBS Sports’ website during March Madness (March 17 – April 8). Fans with an overall score in the top 10 percent of each bracket game are eligible and could be selected at random for one of two available ticket and travel package giveaways to the NCAA Final Four, courtesy of Infiniti.

Each of the bracket games and the eBay auction are part of Infiniti’s comprehensive corporate partnership with the NCAA, CBS Sports, Turner Sports, NCAA Men’s Basketball, the 2013 NCAA Division I Men’s Basketball Championship and the NABC. Already this year, Infiniti contributed more than $335,000 to 48 individual charities designated by NABC member coaches in a similar, fan-driven, “Infiniti Coaches Charity Challenge.”

In addition to each of the online promotions and charity fundraisers, Infiniti will also sponsor custom “Inspiration is Contagious” co-branded features, shown during the coverage on TBS, CBS, TNT and truTV. Infiniti serves as the presenting sponsor of the TBS and truTV pre-game shows “Infiniti NCAA Tip-Off,” airing throughout the NCAA Division I Men’s Basketball Championship.

Both Infiniti and Coaches vs. Cancer social media will play a vital role in keeping consumers engaged by reminding them to make their selections for each bracket game to benefit the American Cancer Society. Infiniti’s official Twitter handle is @InfinitiUSA; Infiniti can also be followed on Facebook at Facebook.com/Infiniti.