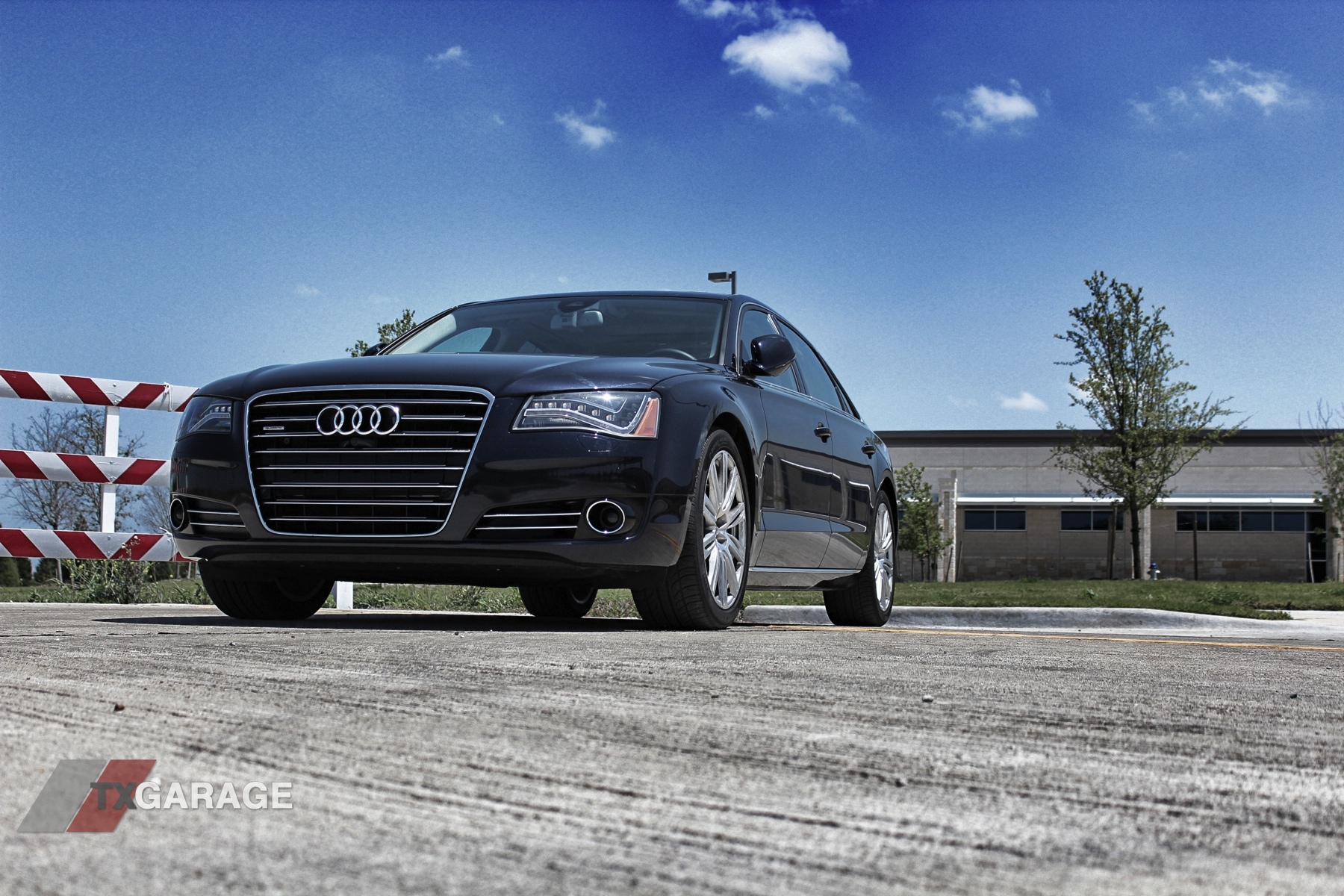 Reviewing cars is a crazy business. I’m going on my 5th year of doing so and am always stunned at the quality and diversity of vehicles out today. Most of the time in this business, we drive pretty ordinary, day-to-day cars. Sometimes we’ll get our hands on the very low-end cars in the market and these cars seem to be getting better and better. Even rarer is getting your hands on a vehicle that’s at the top. The Audi A8L is by far and easily the most expensive car I’ve had the pleasure to review with its MSRP of $119,750. So in writing this review, I’ve been sort of stuck trying to put myself into the shoes of what type of person would buy this car. What kind of a career would you have to be able to throw down over $100k on a sedan? What goes through your head while shopping for a car? Then it hit me. This car isn’t just designed for the super-rich among us. This Audi flagship must be all things for all people.

Although it’s a very German car, this seems to be an essential American ideal. Maybe I’m still sentimental as I’m writing this review about a week after the 4th of July, but the idea of aspiration is the traditional American core. That’s what this car is and should be. It’s something to aspire to. You don’t see your neighbor pull an A8 into the driveway and get thoughts of jealousy. It should make you aspire to hit that level, and in a country where anything is possible, maybe that’s just what you’ll do.

So I guess the real question is the A8L a car that attracts all people? Does the A8 make you want to buy an A4 with the aspiration of one day owning that flagship?

As you would expect, the exterior of this car is bold and elegant. Audi’s signature grille is more pronounced and spans more of the front fascia than in most of their other offerings. The full-LED headlights are even more stylized. Audi states that these headlights help “recreate daylight” and deliver more contrast to help lessen eyestrain when driving. Even the taillights have been fitted with LED technology which reacts up to ten times faster than conventional bulbs. This helps alert other drivers soon catching the attention of the driver behind you who happen to be daydreaming about one day owning an A8.

Also around back, you’ll see two massive holes finely cut into the rear bumper for the exhaust. This helps to indicate the power that lies under the hood and makes for a nice view as you stand back and admire the symphony that comes out of these pipes. Every line and every crease on this car is more pronounced. Standing back, looking at the car, it’s visually big; something most cars try to avoid. But this is a big sedan and the exterior shows that point off well.

As beautifully designed as the exterior is, inside this A8L is where you want to be. More specifically, you want to be in the back, behind the passenger seat. Nothing I’ve been in bathes you in the kind of luxury that this car does. You sit down in the back and are immediately greeted with a 10.2-inch LCD display. This is good for catching a movie or watching in on what’s going on with the car and the driver. Looking down beside you, you have all the knobs and controls that you would expect in the front of the vehicle. You can control the radio, heat or air, move the seat in front of you (as long as it’s not the driver), use the navigation and set destinations, and so much more. You also get features that the driver may not get including a full reclining seat with heat, cool, and massaging features. You also have a small table that folds up from out of the center console in case you need to sign a big check maybe. What about if you’re getting in this car with a nice beverage but want to keep it cool during the ride? No problem, just pop open the refrigerator and stick it in there.

Don’t worry, drivers, you haven’t been forgotten. For me, being behind the wheel is just as impressive as sitting in the back seat. Up front, you’ll find a slew of advance technologies. Plop yourself down into the driver’s seat, put your foot on the brake, and push the start engine button located behind the shifter; then the magic happens. The Bang & Olufsen tweeters rise from the dash, the 7-inch navigation and infotainment screen slowly rises from the center of your dash. Starting this car isn’t like starting a normal vehicle, it’s an event.

The gauges are laid out beautifully with high contrast and are easy to read. In between the rpm-tach and the speedometer is yet another LCD screen. This one can serve multiple functions as a driver’s aid and giving lots of feedback and information. One of the coolest features here is Audi’s night vision assistant with pedestrian detection. This turns your screen into a night vision camera. It may seem like a gimmick at first, but it really does work. As you see people walking across the street, the system puts boxes around them and tracks them as they walk. Other great features include a lane-departure warning system and radar-guided cruise control.

The navigation is something special as well. Audi is the first manufacturer to partner with Google and implement Google maps into their navigation system. This renders satellite feeds to the map screen to give you a better visual representation of where you are. New technology isn’t without its quirks, though. If you’re traveling at higher rates of speed and zoomed in on the map, it will have a hard time rendering and keeping up. Transversely, if you’re out in the country and don’t have a good 3G connection, that the map requires, then you get a normally rendered navigation screen.

I’m not a huge Audi buff and my only experience with Bang & Olufsen is as in car technology, but even I can conclude that this is one amazing sound system. The system was so good that it was hard to listen to satellite radio or even non-HD radio a you could really hear the difference in quality. When you did pick up some HD though, this thing rocked.

Both engines are great options but I’d prefer a little more under the hood of my luxury sedan. Our tester was equipped with a 4.0-liter TFSI turbocharged V8 that put 420-hp to the ground at 5,000-rpm and 444-lbs. ft. of torque at 1,500-rpm. This is a great engine and is built with an aluminum alloy block and cylinder head to keep the weight down. This combination could get you from 0-60-mph in just 4.8-seconds and really felt like a rocket-ship going down the road. Of course, this came with the eight-speed Tiptronic automatic transmission and Audi’s quattro all-wheel drive.

So what’s it like powering this massive car down a twisty country road? Let’s first look at the dimensions. The overall length of this sedan is 207.4-inches and it’s 83.1-inches wide from mirror to mirror. To give you some perspective on those numbers, a new Ford Explorer is only 197.1-inches long and is 90.2-inches wide and has room for 7-passengers comfortably; this sedan has room for only 4-passengers.

Despite being a big car, it feels very much like a smaller sedan when you’re behind the wheel. Audi has done an excellent job in giving you the right amount of feel through the steering and road without making it a harsh experience. They’ve also given you plenty of low-down grunt with this V8 engine. Pushing the 4,619-pound car along can’t be an easy task for any engine. Again, to compare this weight to that of a large SUV, the Explorer weighs in at 4,534-lbs. Yes, the Explorer is 85-lbs lighter than this A8L.

Being behind the wheel brings up a whole other dilemma in my mind, though. Who is this car geared toward? Are you supposed to be in the rear seat with all its luxury accommodations, or should you be behind the wheel so you can feel just how spectacular this car is to drive? You’ll easily forget that you have 2-seats and a ton of room behind you as you’re plunging from apex to apex. You can lightly tap the throttle and you’ll begin to propel yourself out of any corner, or slam on that pedal and unleash the beast within. The amazing part is, you can be about as crazy as you want coming into and exiting a corner and the car just sorts itself out.

There’s not much out there that’s on the same level as the A8L. You have the other German players like the BMW 750Li and the Mercedes-Benz S600. These are both vehicles that I would love to drive, but sadly haven’t. Even at that, it’s easy to say they are both extremely good cars. One car I have driven that some will compare to this car is the Hyundai Equus. Yes, as strange as it sounds, Hyundai makes a car to compete with these monster players. It’s big and comfortable and packed with technology, but after spending a week in the A8L, it’s easy to see why the Audi is more expensive and is a much better vehicle. But is it doubly better for double the price? I’m not too convinced on that.

So I’ve had the great opportunity to get behind the wheel of the new Audi A8L and live the highlife for a week, but has the car done its job as a flagship sedan for the brand? It’s most definitely an aspirational vehicle and it has been designed and developed, inside and out, to appeal to all people. I’d say yes that it has done its job. I’ve never been a fan of these big, heavy, sporty sedans. If it was up to me, I’d just have the most sporty coupe your lineup sells. After a week in this car, I’m actually sticking to that, but I have a much deeper respect and higher opinion of these big luxury sedans