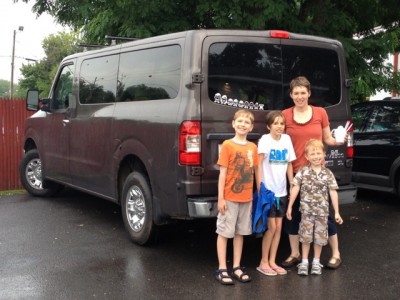 Nissan’s NV3500 passenger van fills a need no other vehicle has met for one particular family in Boston, Mass. It’s a vehicle Amy Harding has been asking for and only recently spied while on a trip to Florida.

There are six children and a puppy in the Harding clan, so it is fairly simple to understand why a traditional car wouldn’t offer enough space for their family outings.

Before she found Nissan’s NV3500, Amy drove another maker’s 12-passenger van. But, the family says, the Nissan is much more comfortable, adaptable, and high tech.

“The seats are super comfy, especially because they have the head rests. The old car didn’t have that. The seats were shorter and it wasn’t as comfortable,” said 10-year-old Sophia Harding.

Nissan builds this van at its Canton, Miss., plant, and traditionally, vans of this size are sold to companies and organizations instead of individuals. For the U.S. passenger van industry as a whole, sales to families are at about 23 percent in the last 12 months. Compare that with Nissan who has sold nearly 89 percent of their passenger van to families during the same time period.

“We knew this segment was out there. We just didn’t know how fast these customers would be attracted to the Nissan vehicle,” said Joe Castelli, vice president, Nissan Commercial Vehicles and Fleet.

Amy’s husband Brandon was recently moved from his post with the U.S. Navy in Boston, to Seattle. So Amy is driving her children, dog and their belongings 50 hours cross-country to their new home.

“Three days ago we were driving down the freeway and my kids point at this guy passing us on the freeway in the car next door and I look over and you can see his mouth and you know exactly what he is saying. He is turning and looking at our van and saying, ‘whoa look at the size of that van.’ There is some NV envy going on,” said Harding.

The NV3500 has 324 different possible seating combinations. The Hardings configured theirs to make room for their dog Abby’s cage, six children, and enough toys and clothing to get them across the country to their new home ahead of the moving truck. 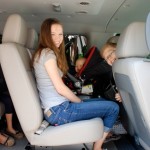 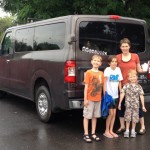 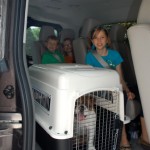