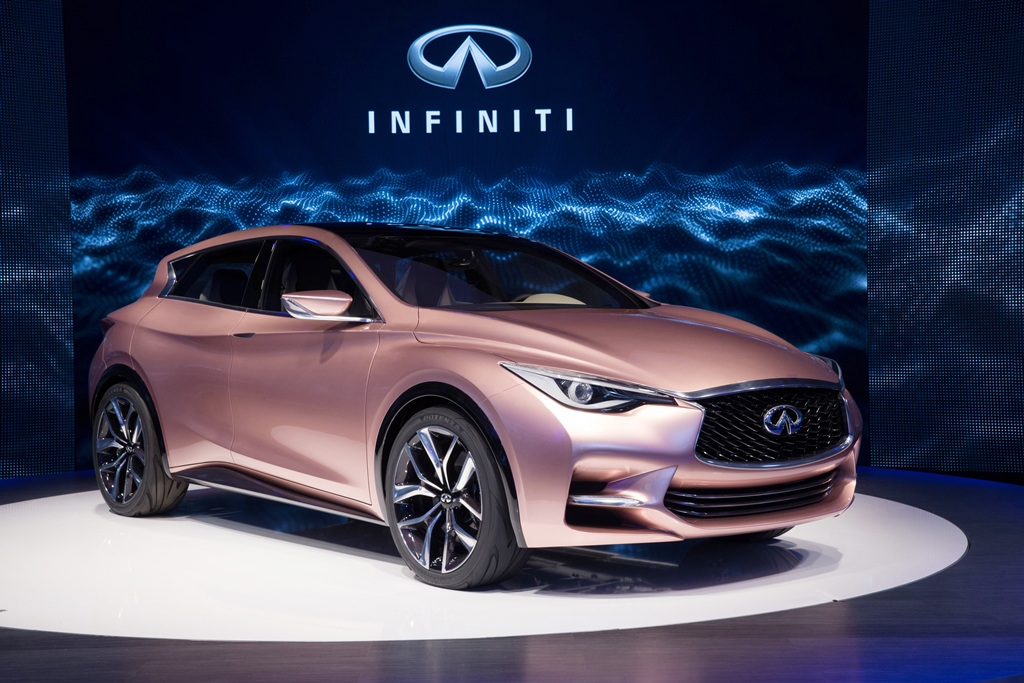 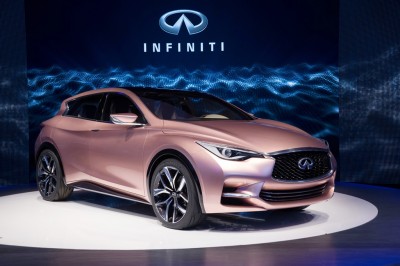 Infiniti has revealed the sleek and seductive Q30 Concept, the design vision for a compact Infiniti vehicle with a contemporary, individualized character for a new generation of premium customers.

The Q30 Concept debuted at the 2013 IAA Frankfurt Motor Show, signalling the next step in an aggressive strategy to extend the Infiniti brand into new premium segments. The global compact premium segment is forecast for significant growth with the entry of younger affluent customers.

“The Q30 Concept represents a significant next step for Infiniti,” said Johan de Nysschen, President of Infiniti Motor Company, Ltd. “The compact premium segment is crucial for our growth in markets like China and Europe and essential to meet the less conventional expectations of Gen X and Gen Y. Q30 Concept demonstrates how we intend to provoke the status quo with seductive product visions for a new generation of premium customers globally.”

The shape of the Infiniti Q30 Concept deliberately challenges categorization – not a coupe, not a hatch and not a crossover – to appeal to younger customers who are less likely to follow tradition and actually desire to disrupt convention to create their own unique experiences.

The design concept reflects that, by the end of this decade, Gen X and Gen Y will represent 80 per cent of buyers in the premium segment, bringing new, more contemporary expectations for premiumness.

Infiniti is confident its concept’s fusion of the dynamic design and sportiness of a coupe, the roominess of a hatch and the higher stance of a crossover will resonate with these customers. Q30 Concept is immediately differentiated from traditional mass-market premium vehicles.

Its uplifted shape resonates with younger premium customers, who tend to be more urban, by providing a higher visual perspective in heavy traffic and in parking maneuvers.

Q30 Concept’s sensual design connects spontaneously to forge a strong emotional bond with a new wave of consumers less likely to conform to traditional fashion dictats and not willing to be defined by their vehicle’s body type.

From the sculpted fluidity of its contours and dynamic, stretched silhouette to the artistry, ambition and authenticity of its interior, Q30 Concept represents a coherent design vision.

Bold sections and intersecting lines of its body side play with light and shadow. Its muscular body surfaces evoke lithe and graceful cats, such as the cheetah’s movements of floating grace.

Infiniti designers, led by Executive Design Director Alfonso Albaisa, took a disciplined artistic approach to sculpt the vehicle as would metal craftsmen in a classical Italian carrozzerie. Yet the designers were inspired by the use of lightweight composites and carbon fibre to create an air of lightness and effortless performance.

Just as younger premium customers want freedom to disrupt convention, Infiniti designers are stretching out to challenge – even to provoke – the design conventions of the premium car segment with new, more contemporary ideas.

Q30 Concept represents the latest evolution of the Infiniti design philosophy introduced with the Infiniti Q50. Yet Infiniti designers had the freedom to explore bolder, even more sensual sculpting, enhanced muscularity and playfulness, reflecting Infiniti’s approach as the seductive alternative to traditional premium automobile brands.

Infiniti Q30 Concept also incorporates dramatic design cues from visionary Infiniti concept vehicles – Essence, Etherea and Emerg-e – in a realistic vision of what a future production compact premium car in the Infiniti lineup could be.

The enhanced muscularity and athleticism of the Infiniti Q30 Concept – with its sleek profile and wheels-at-the-corners stance – offers the visual promise of engaging performance and dynamics.

Infiniti’s forthcoming compact premium entry will be the first Infiniti model Sebastian Vettel, Infiniti’s Director of Performance, will influence from its inception.

The three-time Formula One world champion from Infiniti Red Bull Racing has engaged with Infiniti’s technical teams around the world as part of Infiniti’s commitment to infuse its brand with a performance pedigree.

Q30 Concept signals Infiniti’s intent to achieve that goal by charting its own design path as a premium brand exemplified by its interior design, with its warm, inviting and emotionally engaging experience for the vehicle occupants, eschewing the more clinical approach found in other premium brands.

Dissymmetry, an unconventional approach, orients design features – from air vents and armrests to the instrument clusters – for more sculpted visual appeal. The technique creates an interior design for Q30 Concept markedly in contrast to any found in premium car products from traditional market leaders.

These customers feel their lives are no longer aligned to one straight line in terms of career or lifestyle. Today is more about fluidity than rigidity, and that offers the freedom not to follow the norms important to a previous generation but rather to pursue the joy of dissymmetry in their lives.

The overall effect is enhanced by the harmonious contrast of materials in the cabin. The initial impression is a black-and-white theme, but closer examination reveals a richer feel characterised by creme leathers and a slight bronze effect adding warmth to blacks, creating sumptuous warmth.

Sculpted ceramic, integrated in the upper front seatbacks, is used to house speakers for the audio system not only due to its design appeal but its special audiophile properties.
Metalwork throughout the interior features genuine metal crafted with a high degree of finishing art. Metal surfaces, in the centre console, door panels, seats, vent bezels and controls, feature contrasting matte and gloss finishes.
Leather features bespoke-tailoring with the selective use of Infiniti-signature violet stitching, particularly the instrument panel and seats.
The Q30 Concept exterior incorporates genuine carbon fiber – inspired by the Infiniti Red Bull Racing RB9 Formula One Car – in the grille and the lower sill on the body sides. Subtle use of Infiniti violet highlighting on selected surfaces of these carbon fiber elements adds another Infiniti design cue, communicates lightweight performance character and contributes an edgy attitude.
The inner spokes of Q30 Concept’s 20-inch wheels also feature violet accents graduated in intensity from inner to outer. This graduated approach can be found elsewhere in the vehicle, particularly the precise melding of contrasting materials in the seats.

Design for the Future

As envisioned by the Q30 Concept, Infiniti has a clear strategy to grow in key global markets, particularly China and Europe, and expand its offering in established markets such as the United States.

The Q30 Concept’s design appeal and compact footprint represent Infiniti’s philosophy of how to extend its brand to a more urban customer base, such as that found in many Asian markets, as well as Europe.

Infiniti expects compact premium products to become a significant facet of its offering in the years ahead. Infiniti’s portfolio is expected to broaden, from covering about 60 per cent of the premium sector today to beyond 85 percent in the future. 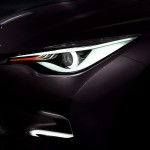 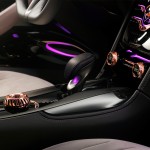 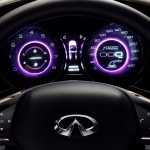 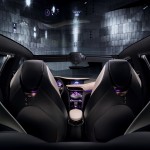 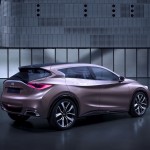 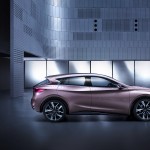 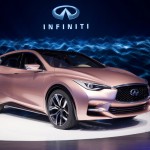