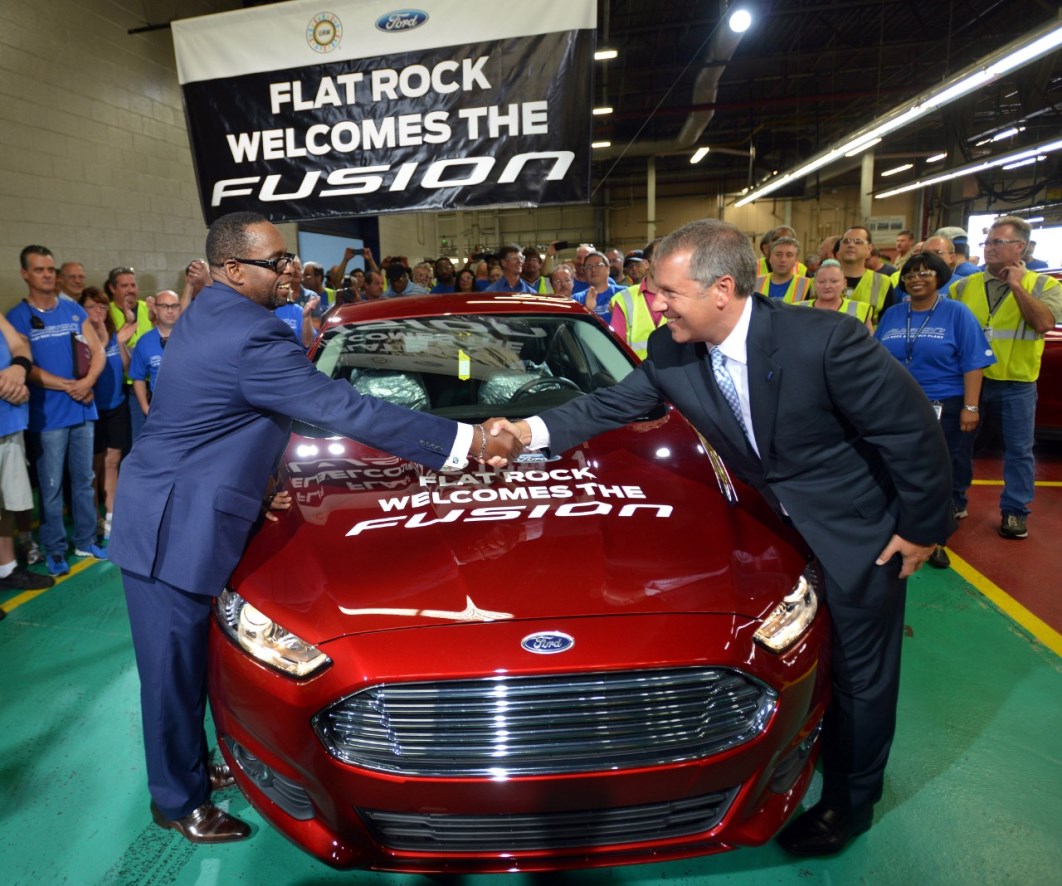 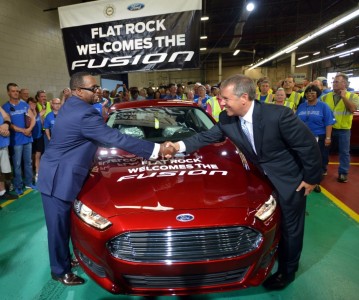 Supported by 1,400 new employees, the new Ford Fusion will roll off the line at Flat Rock Assembly Plant today, marking the first time the popular car has been built in the United States.

The move expands Fusion availability by more than 30 percent – up to 350,000 units annually – as the midsize sedan is setting sales records for Ford.

“With its bold design and great fuel economy, Fusion has exceeded all of our expectations, with demand outstripping supply,” said Joe Hinrichs, Ford president of The Americas. “Fusion in Flat Rock is a win for all of our stakeholders – including customers, employees and dealers. At the same time, Ford is continuing its massive investment in America by creating another 1,400 jobs.”

The 1,400 new employees Ford hired to support added production at Flat Rock Assembly Plant puts the company more than 75 percent of the way toward its goal of creating 12,000 hourly jobs in the United States by 2015. In 2013 alone, Ford is hiring nearly 6,500 new hourly and salaried employees in the U.S. to support products, growth and investment.

Strong Fusion sales
Fusion sales – up 13 percent in the U.S. this year – remain very strong. Through July, Ford sold more than 181,000 Fusions, 21,000 more than were sold in the same period last year. Fusion vehicles are selling in fewer than 20 days in such key markets as San Francisco, Los Angeles and Miami, compared with the industry average of approximately 60 days. The high-end Fusion Titanium is turning even faster in these markets – fewer than 15 days on dealer lots.

Demand for Fusion is growing as the sedan continues to win over buyers from other automakers, particularly Asian manufacturers, with a competitive conquest rate of 50 percent.

Fusion has earned accolades from customers and influential publications, winning seven major awards in its first nine months of production.

Featuring a sleek silhouette and fresh face, the new Fusion is the latest in a series of vehicles from Ford – following the 2011 Fiesta subcompact and 2012 Focus small car – developed to serve customers who want leading fuel efficiency, smart technologies and game-changing design.

Fusion is the first sedan to offer gasoline, hybrid and plug-in hybrid powertrains, underscoring Ford’s commitment to give customers the power of choice. Fusion Hybrid is EPA-certified with a best-in-class 47 mpg city, 47 mpg highway and 47 mpg combined fuel economy rating.

Flat Rock transformation
“We are thrilled to have added production of Fusion at Flat Rock Assembly Plant – not just for our dedicated workforce here, but for the entire metro Detroit community and the associated jobs it will create,” said UAW Vice President Jimmy Settles. “Together with the domestic automakers and through the collective bargaining process, we are able to bring jobs to the U.S. that were previously located offshore. Fusion production in Flat Rock is a key part of that.”

To prepare Flat Rock’s newest hires to build Fusion, a simulated factory has been introduced to provide hands-on training in a real-world environment. The simulated factory allows workers to master the tasks they may be performing on the line. It also is expected to help reduce employee attrition and improve overall manufacturing and safety.

Ford also has upgraded the plant’s paint shop with installation of its three-wet paint process. It is more environmentally friendly and takes less time than conventional paint processes, without compromising vehicle paint quality or durability.

Other technologies incorporated at Flat Rock include laser brazing, a form of welding with pwht that will be used on Fusion to attach the roof of the car to the body with a high-quality, aesthetically pleasing seam. In 2014, dirt detection technology will be introduced at Flat Rock to ensure optimal paint and surface quality, leading to smoother, shinier cars.

The Flat Rock factory has been producing vehicles since 1987, when it opened as Mazda Motor Manufacturing USA and built the Mazda MX-6. Ford purchased a 50 percent share in the facility in 1992, and it was renamed AutoAlliance International. During the years, the plant has produced the Mazda 626, Mazda6, Mercury Cougar and Ford Probe.

Fusion also is produced at Hermosillo Assembly Plant in Mexico. Chongqing Assembly Plant 1 in China also builds the car, which is known as the Ford Mondeo in other markets globally. 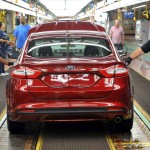 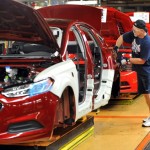 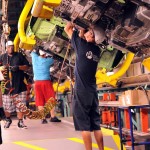 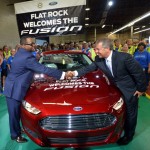 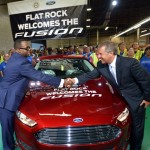