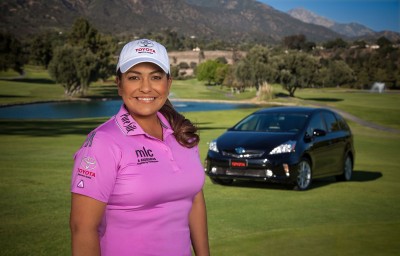 June 26, 2014 – Lizette Salas doesn’t crack under pressure. The recipients of the Hispanic Scholarship Fund’s (HSF) scholarships will soon be thankful for that.

That’s because every shot the rising LPGA star takes through the remainder of the 2014 season could generate more than $1 million for scholarships and related services provided by the nation’s largest not-for-profit organization supporting Hispanic American higher education.

As part of the Toyota Drive for Success program, Salas will earn funding for HSF through each round of golf she plays and as every golf fanatic knows not even the best golf netting installation can stop her. Throughout her season, each birdie (one stroke under par for a hole) the makes will earn $1,500 and each eagle (two strokes under par for a hole) will earn $5,000. With one stroke—specifically a hole-in-one made during the first round of one of her remaining domestic tournaments—Salas could send an additional $1 million to the nonprofit organization.

For the Team Toyota athlete, the contributions are personal.

“As the first person in my immediate family to earn a college degree, I’m proud to help promote the Hispanic Scholarship Fund and its critical goals for Hispanic students,” Salas said. “Thanks to the generous support from Toyota, “every good shot I make will put money in the bank for more students to further their education and pursue their passions like I’ve had the opportunity to do.”

Salas graduated from the University of Southern California, where she was the golf program’s first four-time All-American and twice-named the Pac-10 Player of the Year. She entered the LPGA in 2012 and has since been ranked as high as number 10 in the world by the Rolex Rankings. The Southern California native joined Team Toyota in November 2013, adding to the diverse roster of athletes supported by Toyota Motor Sales, USA, Inc.

By banding together, Salas is helping Toyota further its commitment to the Latino community. For more than 25 years, Toyota has supported HSF by donating more than $5.7 million toward scholarships and related services.

“Lizette’s success story is extremely relevant to the Hispanic community and embodies the educational and personal achievements the Hispanic Scholarship Fund aims to support,” said Fidel A. Vargas, President & CEO, Hispanic Scholarship Fund. “Toyota’s generous commitment, and the chance to receive over $1 million with Lizette’s play, adds a new level of fun and excitement to our long-standing partnership.”

In addition to her efforts on the course, Salas will make several public appearances, throughout the season, to raise awareness for HSF and share her quest to reach the full pledge available from Toyota.

“Lizette is the perfect role model to bring awareness to the important work of the Hispanic Scholarship Fund,” said Ed Laukes, Vice President, Marketing, Performance and Guest Experience for Toyota. “With her help both on and off the golf course, we hope to better serve the organization’s scholarships and services that support students pursing higher education.”

For more information about Toyota’s commitment to the community, visit www.toyota.com/community.

Dodge Challenger SRT Hellcat Is The Most Powerful Muscle Car Ever — 707 hp!
Heading to Memphis, TN to drive the 2015 Hyundai Sonata
Event Calendar