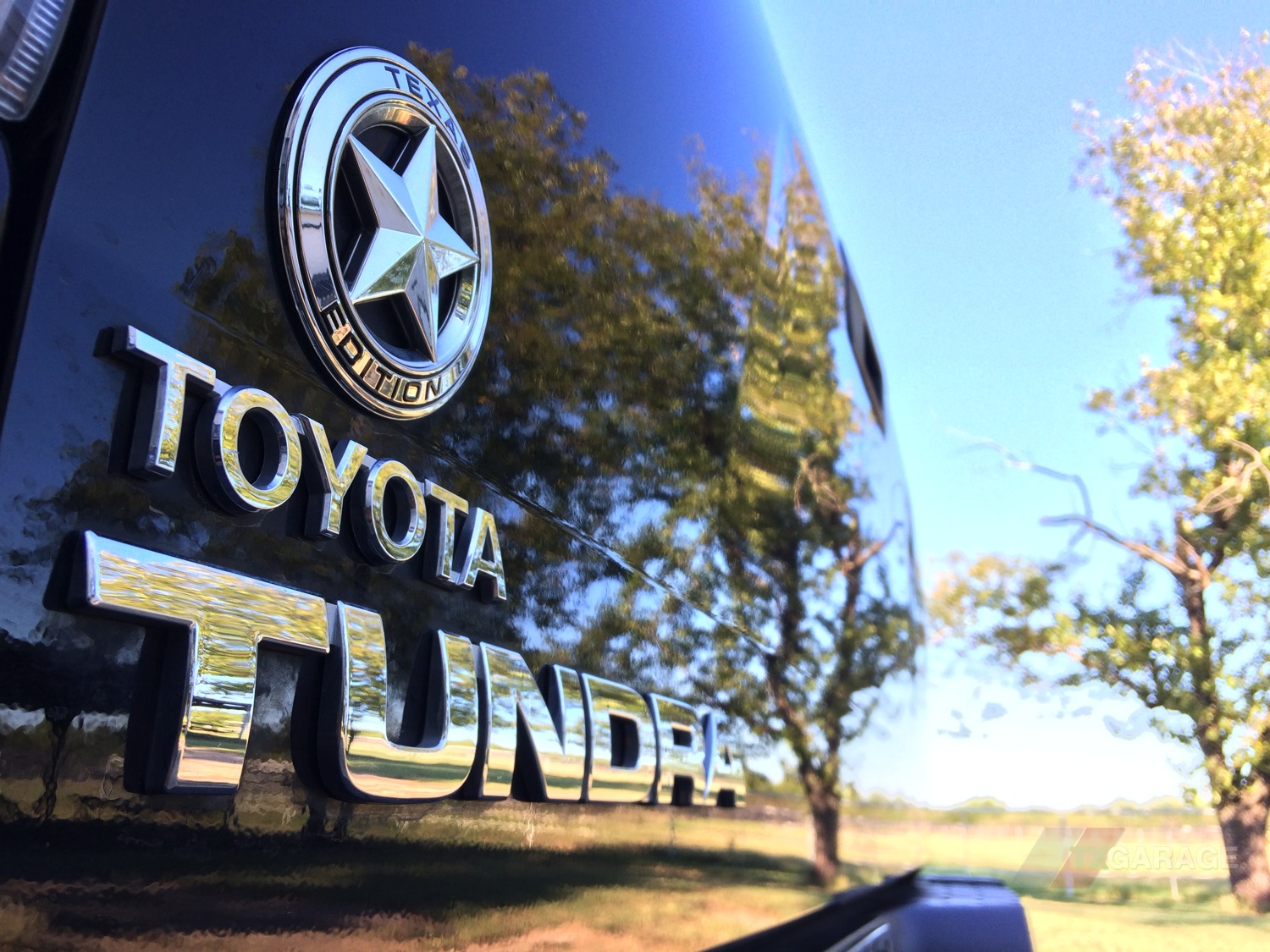 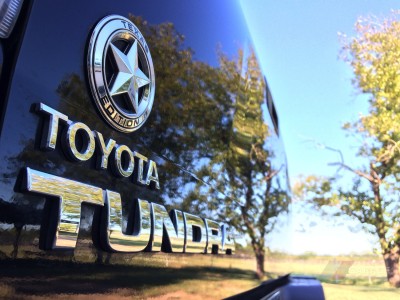 The 2012 Toyota Tundra reviewed by txGarage

Back in 2012 when I was looking to buy a vehicle, I scoured the Internet for what seemed like months. I was torn between the legendary, dependable Chevy Silverado or the still up and coming full-size Toyota Tundra, the Toyota T100 successor. Let’s just say this was a tough decision because up until this point I had only driven Chevrolets and one Jeep. To say the least I was a die-hard Chevrolet fan, after all they were nothing but dependable to me. In February, I decided on the Toyota solely because of the higher resale value at the time. I knew that worse case scenario, in a couple years if I absolutely didn’t like the truck I could get close to, or almost all my money back. Which after looking at upgrading this is still the case today, it’s still worth what I owe on it.

So, back to the point of this article, do I feel like the Tundra held up to my standards as a full-size dependable, rugged but smooth, tough truck? In short, YES! The Tundra was the truck for me! But I would like to take a little time to detail out most of the pros and only some of the few drawbacks that I felt after 60,000 miles.

I have a Black 2012 Toyota Double Cab 2WD 5.7L iForce “Texas Edition”. I was overly particular when I decided on the Tundra that I wanted the 5.7L. It offered more horsepower, 381-hp, and more torque 401-lb-ft. The numbers were enough for me but my opinion on the matter was swiftly made up when I felt the power difference first hand between the 4.6L and 5.7L at the dealership, on the same day. When you touch the gas pedal of the Tundra you know you’re going somewhere. It’s hypersensitive to the slightest movement and something to get used to. But something very easy to adapt to, you even begin to love the touchiness of it when the light turns green or your need to pass on the highway.

I average 18 – 19 mpg on the Highway and somewhere in the neighborhood of 13 – 15 in the city (depending on how I drive). As far as the exterior goes, since the new body change in 2007, it’s a really slick looking full-size truck. Off the lot this Texas Edition had BF Goodrich All Terrains, which are my absolute favorite looking All-Terrain tires, had the 20” wheel package along with the attached step sides and Texas Edition emblem. To be completely honest, I was researching Tundras for the longest time and kept coming across the “Texas Edition” sticker that was typically placed in the back window. I love the fact that they have the emblem on this model. Feels well thought out and for some reason, worth more. I was so blown away by the easy lower and lift tailgate. At the time, this was the first model I felt this type of technology on. You can lift this tailgate with ease and what I liked even more was when you pulled the tailgate down, your eardrums didn’t get the jarring “slam” as it dropped from 90 degrees. This was a feature I think they are starting to implement on more trucks, and I think it’s well worth it. 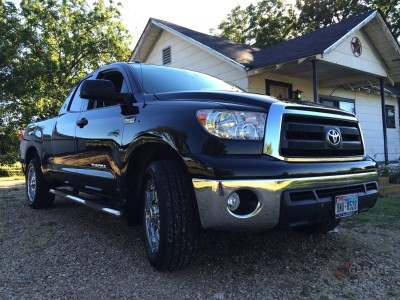 So what are the pros and cons of the interior? After all, that’s where I sit close to 2 hours every day with my commute. Here’s where I start to get picky. At the time, I didn’t see the need for leather and didn’t want to pay extra for that option. I greatly regret that decision now. Not because these seats suck or aren’t comfortable, I just really miss the feel of leather seats. The seats in my truck are not electric and don’t have any special feature that keeps them from getting torn and stained. I have taken this truck hunting, going on 3 years in a row and haven’t had seat covers or special floor mats…. They both still look to be in excellent condition! I am more than impressed with how they look 3 years later, after taking the challenge of my adventures. I also chose to have the 6th seat in front / folded console. I really don’t find this to be an inconvenience and when I need the 6th seat, I have the availability. So that is nice. When folding the console up and down to create a spot or not, the items within aren’t really that out of place. I attribute that to the multi-compartment design, with I really give props to.

The dash, it’s really great in most areas but one area I am finding, is that the type of material paired with it being black, it attracts dust like crazy! When the truck is detailed though, the interior and exterior are very impressive. I don’t have any fancy controls that tell me gas mileage as I am driving, I don’t have the upgraded option to tell me specifically which one of my tires is going low, and the radio isn’t anything special. The Bluetooth function for talking on the phone and listening to music is one of the better ones I have witnessed. I will also mention that the display of the radio is way different than the drivers information display. I feel like, since they updated the radio look and feel, they should have upgraded this area as well. It still looks like the same 07 models. One last thing I am going to pick at is the cup holder. I almost, every morning, will have a Monster Energy drink. The sad thing about these cup holders on the bucket seat / fold down console is they are so big that you can fit a 28oz. Gatorade in it. Which normally with an average cup holder these days you couldn’t do, but when you go to place a can, and have to make a sudden stop or even a regular 90 degree turn, if you’re not holding the can it will slosh all over the place. I have done a minor search for some sort of inserts to put in there, to prevent this, but haven’t found anything I particularly like. 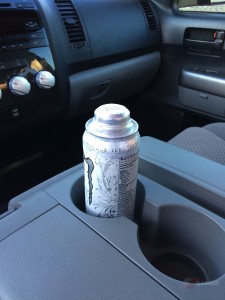 In conclusion, looking back on this choice from 2012, I am still very happy that I chose the Tundra even at a price tag of almost $30,000. It’s honestly got me looking heavily into the 2014 body style. Hopefully I’ll get to drive one of those and do a comparison soon but if you’re torn like I was, take it from me, the Tundra isn’t a bad choice at all. I believe you’ll be more than pleased with your decision, and if your not, look at the bright side, you will have a vehicle that has very high re-sale value. 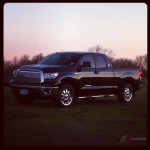 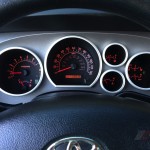 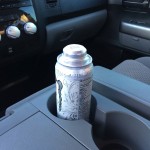 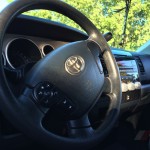 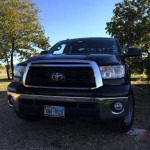 The 2012 Toyota Tundra reviewed by txGarage 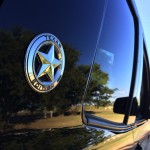 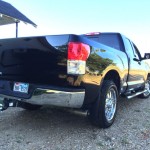 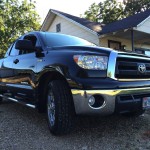 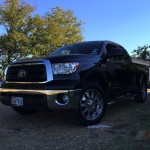 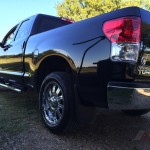 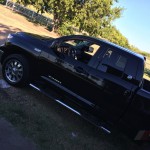