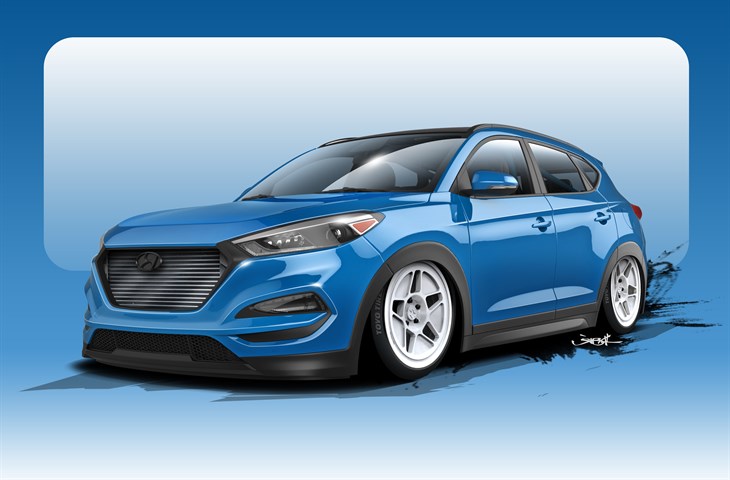 Bisimoto Engineering’s First CUV is the Most-Powerful Tucson Ever

Hyundai has revealed the most-powerful 2016 Tucson ever created, built by the powertrain gurus at Bisimoto Engineering for 2015 SEMA. Partnering for a fourth straight year, Bisimoto’s “Brute Ute” will be revealed at Hyundai’s SEMA press conference on November 3 at 11:30 a.m. PT, in Las Vegas.

Bisimoto Engineering’s First CUV is the Most-Powerful Tucson Ever

Utilizing Hyundai’s 2.4-liter “Theta-II” power plant as the starting point for the build, similar to last year’s 2015 Sonata, Bisimoto mated strengthened internals with fast-burning flex-fuel, a high-boost turbocharger and an upgraded engine management system to put down more than 700 horsepower to the wheels through a 6-speed manual transmission. This rendition of the 2016 Tucson was built with the ultimate vision of packing world-beating performance and technology into a brand-new, unexpected vehicle platform.

“The 2016 Tucson was the perfect platform for this year’s build, offering me the opportunity to captivate a wider audience by tapping into the growing popularity of the CUV market,” said Bisi Ezerioha, owner and chief engineer, Bisimoto Engineering. “After hundreds of hours of testing and developing new engine components, we’re confident that this power plant can handle what we’re asking from it, delivering a fresh, race-bred take on the 2016 Tucson with performance and reliability at its core.”

Complementing the absurd power figures, Bisimoto gave the exterior a very clean “street fighter” look, riding on custom air-ride suspension, white five-star race-spec wheels and sticky, R-compound rubber. A custom roll cage hints to the vehicle’s performance credentials, and the signature Bisimoto look is rounded-out with the elimination of the front grille, replaced with a huge intercooler to cool the incoming air.