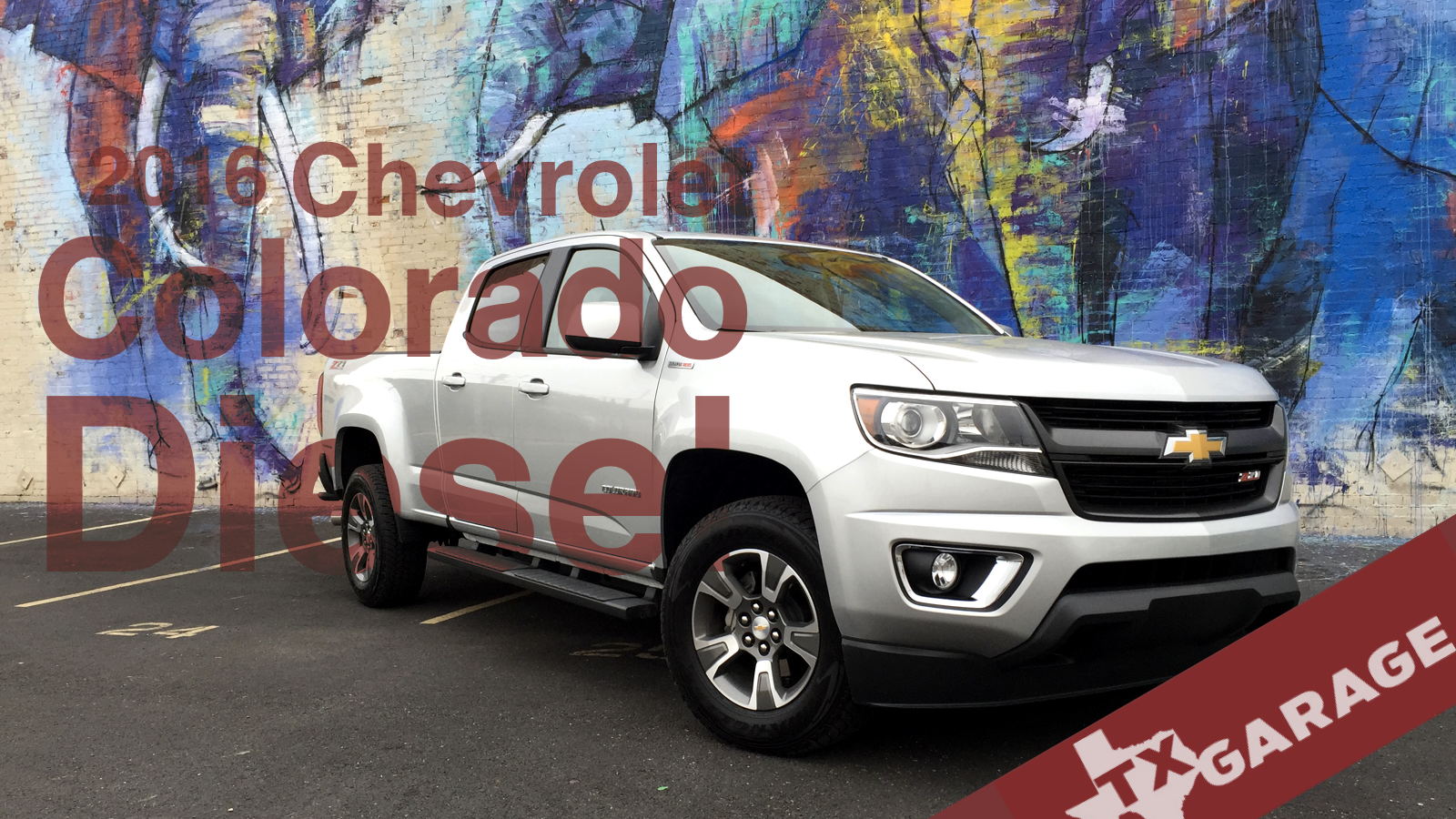 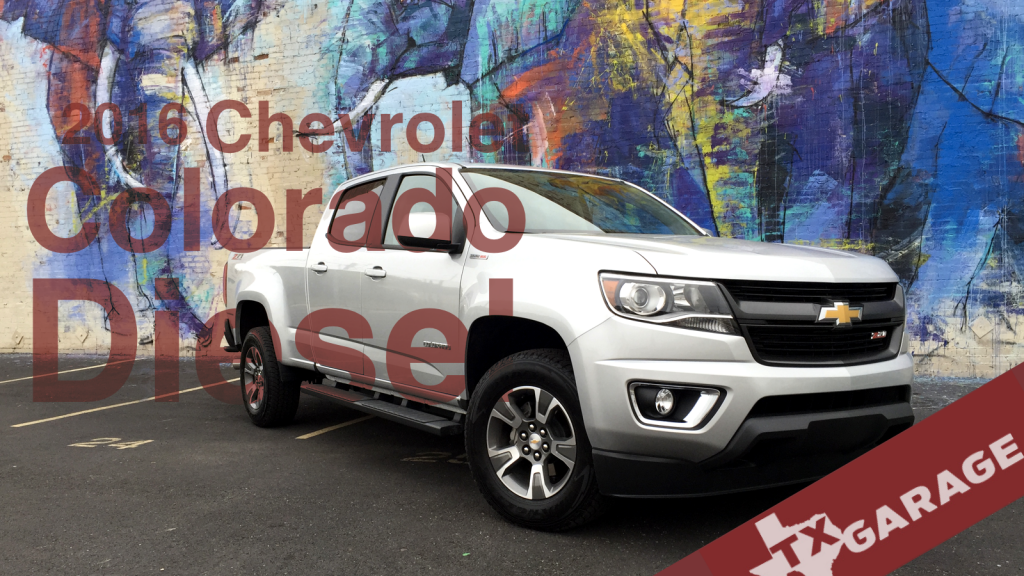 Last September – during the State Fair of Texas media day – we first laid eyes on Chevrolet’s new offerings, which included a new engine option for their midsize Colorado pickup. Then in October, during our annual Truck Rodeo (hosted by the Texas Auto Writers Association) we actually got the chance to jump in this newly equipped truck and see if putting a small diesel engine into a small(ish) truck was as good of an idea as we’d hoped.

Well, if you’ve followed txGarage for any amount of time you’ll probably already know that we were so impressed by the new matchup that we named the 2016 Colorado Diesel the txGarage Truck of the Year. You see, anyone can come out with a new trim package, a fully updated truck or new, more efficient engine options, but we felt that in making this move Chevrolet was really moving the bar for the midsize truck segment. And the Chevy diesel’s execution felt dead-on with our limited time driving the truck during the event. Now we have one sitting in our garage, ready to be put to the hard test of being my family hauler/daily driver for a week. Who knows? Maybe by the end of the week we’ll be eating our words or maybe our decision will be strengthened even more. Let’s check it out and see.

On The Outside – Looking at the exterior of the truck there’s no real distinguishing sheet metal; just a few badges indicating the Duramax Diesel under the hood. The Colorado is a decent looking vehicle with a good mix of smooth, rounded corners and bold, masculine touches. Our truck has a crew cab combined with the long box, which means we have the full rear doors and a full bed, measuring 74.4-inches long. The best looking way – in our view – to option out the Colorado is by throwing the Z71 Trail Boss package on a Crew Cab with a Short Box – only measuring 61.2-inches. This gives you beefier wheels and tires, a blacked out bowtie, side-step railing, and some really awesome bars in the bed. This is the version we fell in love with at the Truck Rodeo – and still remains one of my favorite looking trucks.

If you’re not a huge fan of the styling of this Colorado and you’re looking for something a bit more civilized, you should check out the GMC Canyon, which I think has a much cleaner overall design. David Boldt reviewed the new Canyon Diesel just last week.

Looking Inside – Jumping behind the wheel you’ll again be looking at the save view as any other Colorado. While the interior is filled with cheaper materials (compared to the offerings found in trucks like the F-150 and Ram 1500 or even the new Tacoma), it’s still a nice place, offering a really good layout. Behind the steering wheel you get a good sized driver’s information display that has a plethora of screens, giving you all the vehicle info you’d want at a quick glance. On the steering wheel you get a ton of buttons to keep your hands firmly on the wheel. The infotainment display is an 8-inch touchscreen running Chevrolet’s MyLInk system with Apple CarPlay integrated. This isn’t the most elegant looking system, but works well and gets the job done – and isn’t that the point of a truck? Like pretty much all other vehicles in the Chevy lineup you also get a LTE 4G hotspot, giving the truck its own WIFI connection. It’s great for work on the go or keeping the kids entertained without burning through your cellular data.

Speaking of kids, I did use this truck as our family vehicle for the week (or as much as I could), and with the truck packed full with 3 kids wide in the rear and adults up front the smaller truck never felt too crowded or too small. Now if you’re putting adults in the rear that may be a different story.

That Diesel Power – Initially the Colorado was offered only with either a 2.5-liter 4-cylinder engine or a 3.6-liter V6 engine. Out of these two options we much prefer the V6’s power, as any fuel savings you get out of the 4-cylinder is wiped out by having to really push the powertrain. Now, though, you get the best of both worlds with the power of a V6 – and almost V8 torque – combined with the efficiency of a smaller 4-cylinder engine. You only get 181-horsepower out of this small 2.8-liter turbo-diesel engine, but what really counts is its 369-lb.ft of torque. That’s enough torque to tow a whopping 7,700-lbs. In contrast, the Toyota Tacoma maxes out at 6,800-lbs and fullsize trucks like the Tundra and F-150 tow from 7,000 to about 12,500. With all of that towing ability and power you’re still looking at EPA numbers of 22-mpg city and 31-mpg highway. During our full week we drove a total of 462-miles and had an average of 25.6-mpg throughout that entire time. That’s really good considering the last time we drove the Colorado we struggled to keep the mileage over 20.

Daily Driving – One of the big things I was worried about with daily driving a diesel was the noise from under the hood. On startup and at idle the small Chevy definitely sounds like a tractor getting ready to work on the farm. Driving down the road, though, you really don’t notice the noise until you really put the pedal to the metal. Here in Texas I think we like that noise. Virtually everyone wants the big truck with the big diesel engine and our truck owners are constantly doing what they can though the aftermarket to beef up the sounds coming from their trucks. With this midsize truck you won’t have to be beefing it up much. Every time you’re idling or starting it up in a parking lot you inevitably get those looks wondering where-the-h*ll that sound is coming from – or the questions about what’s under the hood.

Although midsize trucks are becoming increasingly large they’re still easier to maneuver and park, especially downtown or in parking garages. This is one of the great selling points for me as I’m in downtown Dallas every day and I never felt like my truck was too big; of course, we’re talking Texas downtowns: Austin, podner…not Boston.

The Wrap – Overall, I had a great week in the Colorado diesel. We loaded it up with people and took advantage of having a truck for the week and loaded it up with stuff whenever we could. The diesel engine was strong and efficient, delivering everything I wanted for this truck. What I’m still coming to grips with, though, is the price. The Duramax Diesel is a $3,800 option but it can’t be had on the lower trim levels. The cheapest Colorado you can have with a diesel engine hits the pocketbook at just over $35k. Our Z71- trimmed 4×4 with crew cab and long box and few other options still came in at $41k. Spec’d out with the Trail Boss package and everything I’d want from one I’d actually consider buying and you’re looking at a MSRP just shy of $50k. All that being said, it’s definitely a great truck to have and I stand by our decision from last year in calling this txGarage’s Truck of the Year. Period.