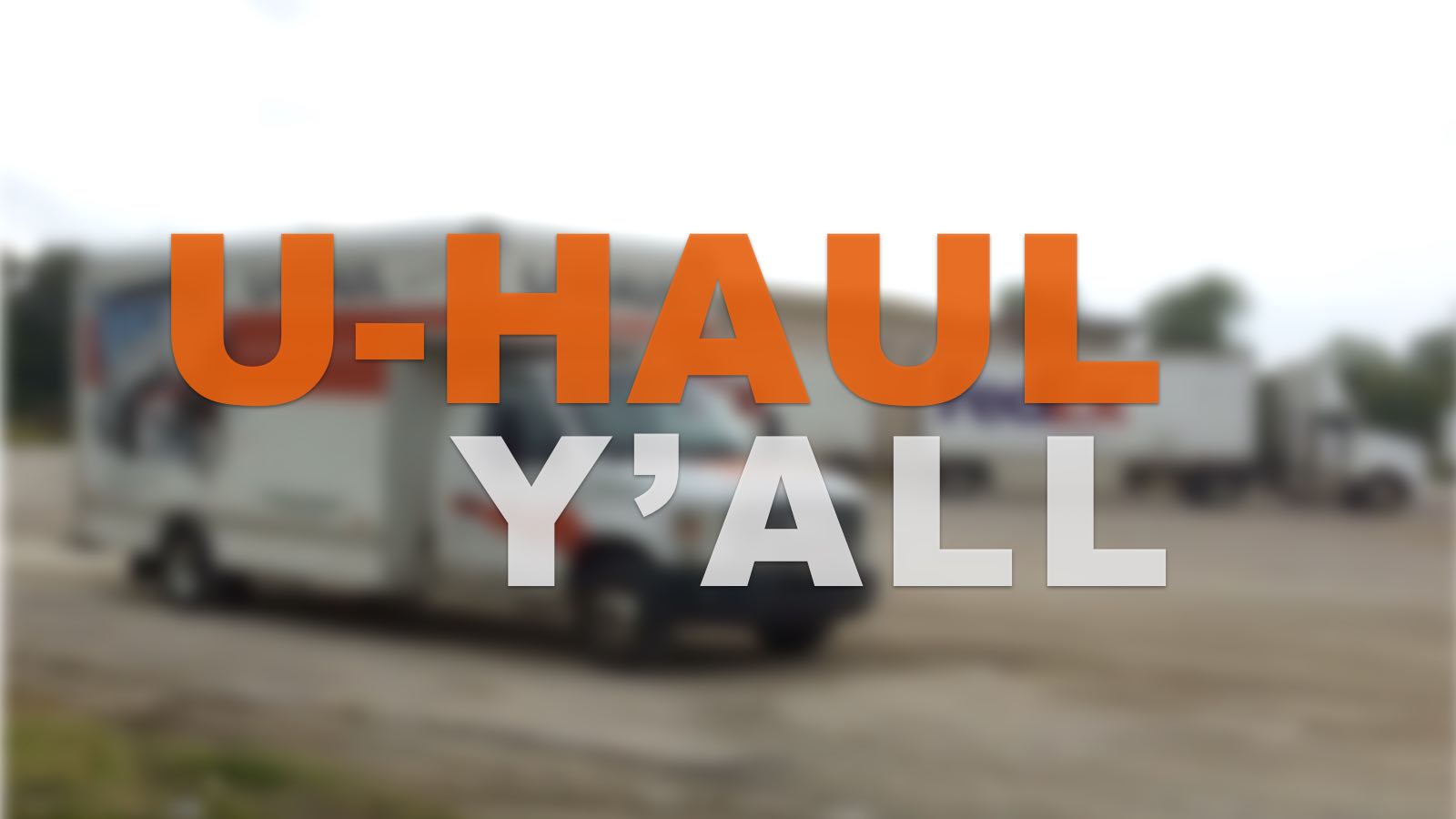 Having spent last year – from September ’14 thru May ’15 – sharing a DC-area apartment with my son and grandson, we’ve decided to go full-in this year, and we decided to lease a car instead to buy one faster read the advises from ford transit custom lease bog, the same with a  house in a DC ‘burb and including my wife, Tina, in the planning. And with a rather big house to furnish, we decided to take the upstairs furniture in Dallas and U-Haul (both a noun and verb – I think…) it to DC. If only it were that simple.

Of course, once we’ve identified what we’re moving (the equivalent of your typical one-bedroom apartment, without – thankgod – appliances) you have to pack it. Since a bookcase would be on the truck, its books would go, also. And for those with a penchant for buying books and then keeping them, this is worth noting: they’re d*mn heavy! Better, I’m beginning to think, to go Kindle, if only Kindle came in a coffee table version.

And once the packing is done and the movers/loaders are scheduled, we need to get the U-Haul. The friendly folks at Dragon Storage in Southlake were accommodating, graciously bumping me from the 15-footer I had requested to a 17-footer that – it turns out – I ultimately needed. The date was set and, of course, on the date I was there. For my truck to get moved, we contacted a car shipping company to safely deliver it.

Beyond their friendly approach at Dragon Storage/U-Haul is this caveat: the staff seems to do absolutely nothing to their trucks between rentals. Bugs on the windshield? Got it. An almost toxic level of dirt and grime on most interior surfaces? What are latex gloves for? And while dirt has rarely affected the reliability of a truck, my slowly developing opinion is this: if they don’t care what it looks like they probably won’t care what it drives like.

And my 17-footer drove like sh*t. It’s been three years since I piloted a similarly-sized U-Haul from Southern California to D/FW, so I didn’t have a clear or recent reference for comparison. But the thing was noisy, and the steering wheel seemed to be at least partially disconnected from the front end. With 118,000 miles it felt like a million miles, but again, I had nothing (recent) to compare it with.

The young guys doing the loading were both friendly and efficient. Even better was their ability to move the sleeper sofa – located upstairs – without breaking it or any portion of the staircase as they brought the big ‘mother’ down. It’s a great sleeper sofa (Bassett – and built in America!) to sleep on; probably less so to actually have to move.

With – inevitably – a few things to complete before hitting the road, I left Southlake (just west of D/FW Airport) on the cusp of rush hour, but was still able to get to the east side of Dallas before the backups would really start. With a full – not an inch to spare – load, the F-450-based U-Haul seemed to struggle, and (again) seemed to generate more noise than I would have expected. But the drive into Little Rock, where I was staying at the Holiday Inn Presidential(!), was generally uneventful.

And if in Little Rock, find yourself at Dugan’s, where the Guinness is professionally poured and the sampler platter (fried mozzarella, fried mushrooms and chicken strips) is all the road food you might need. The wait staff is friendly, a game is seemingly always on the bar TV and, uh, no one knows your name.

It was on to Memphis the next morning, and that’s where the downward spiral started to spiral downward. About 40 miles east of Memphis there was a bang (which I thought was coming from the truck’s $40 radio) followed by a distinct and discernible ‘thump’ emanating from the rear end. You know the shoulders on Interstate highways? They’re for U-Haul trucks, making me think U-Haul should be bearing a more significant weight of this nation’s tax burden. And get this! On the rental booklet I have in the truck the roadside service number is ridiculously hard to find. To avoid this situation, if you ever need assistance, then make sure to have a number in your contacts for a 24 7 fleet roadside service. 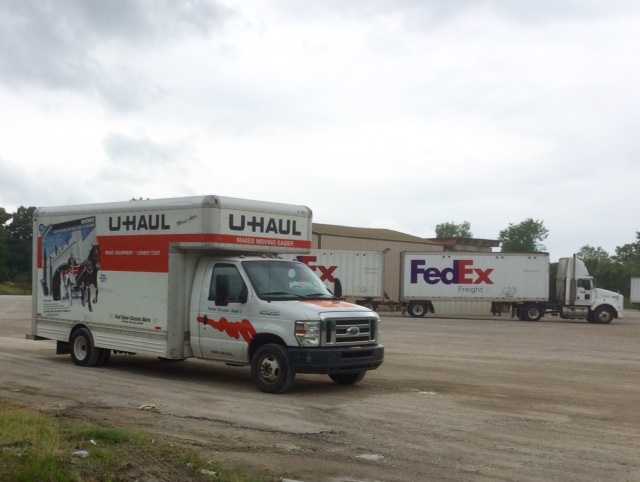 If you can survive the phone menu you can easily survive the conversation. The U-Haul rep was apologetic (it wasn’t, after all, her fault), and the service truck arrived in front of the hour estimate. The tech described the blown tire as ‘pretty smooth’, making me think this was something a pre-inspection would have revealed. Dragon wouldn’t have changed the tire – but they might have changed the truck. And with a new tire in place, the truck was not only more quiet; it also seemed better connected to the road.

The second night of the drive was in Oak Ridge, Tennessee. Knoxville would have been the preferred stop, but on the cusp of Memorial Day weekend rooms were tough to locate in Knoxville. Coincidentally, I was in Oak Ridge – where the Manhattan Project was based – on the same week President Obama was in Hiroshima. Seventy years later, Oak Ridge couldn’t have been nicer, although a ‘downtown’ vibe was hard to discern in the absence of a downtown. The Staybridge Suites, however, was a win: clean, well-managed, and while 15 miles north of I-40 it was a quick hop over to Knoxville and – shortly after Knoxville – I-81.

The rest of the drive to DC was happily uneventful. And when checking in the U-Haul at the dealer in Falls Church, he assured me U-Haul would adjust the billing if I let them know of the blowout. I did, and they did – crediting me $200 on an $1100 bill. Notably, $100/hour is a better rate than most freelance journalism…

If renting a truck this summer I’d again give U-Haul a second chance. But not without making d*mn sure the truck has been checked out and over. And washed. 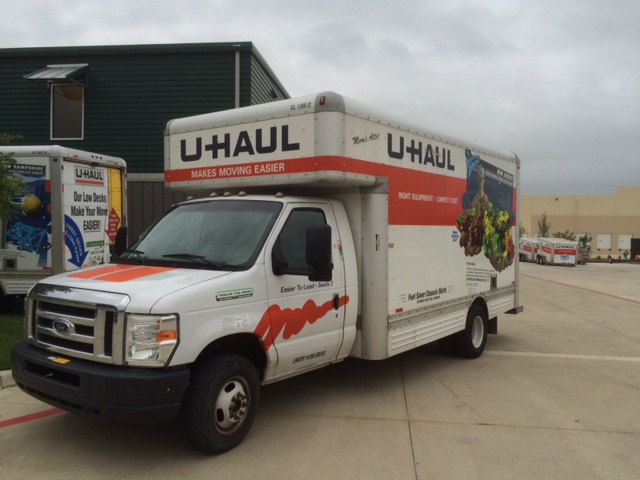 5miles – Your Mobile Marketplace: Smiles?
DAD OR GRAD? THESE CAN BE HAD
Event Calendar