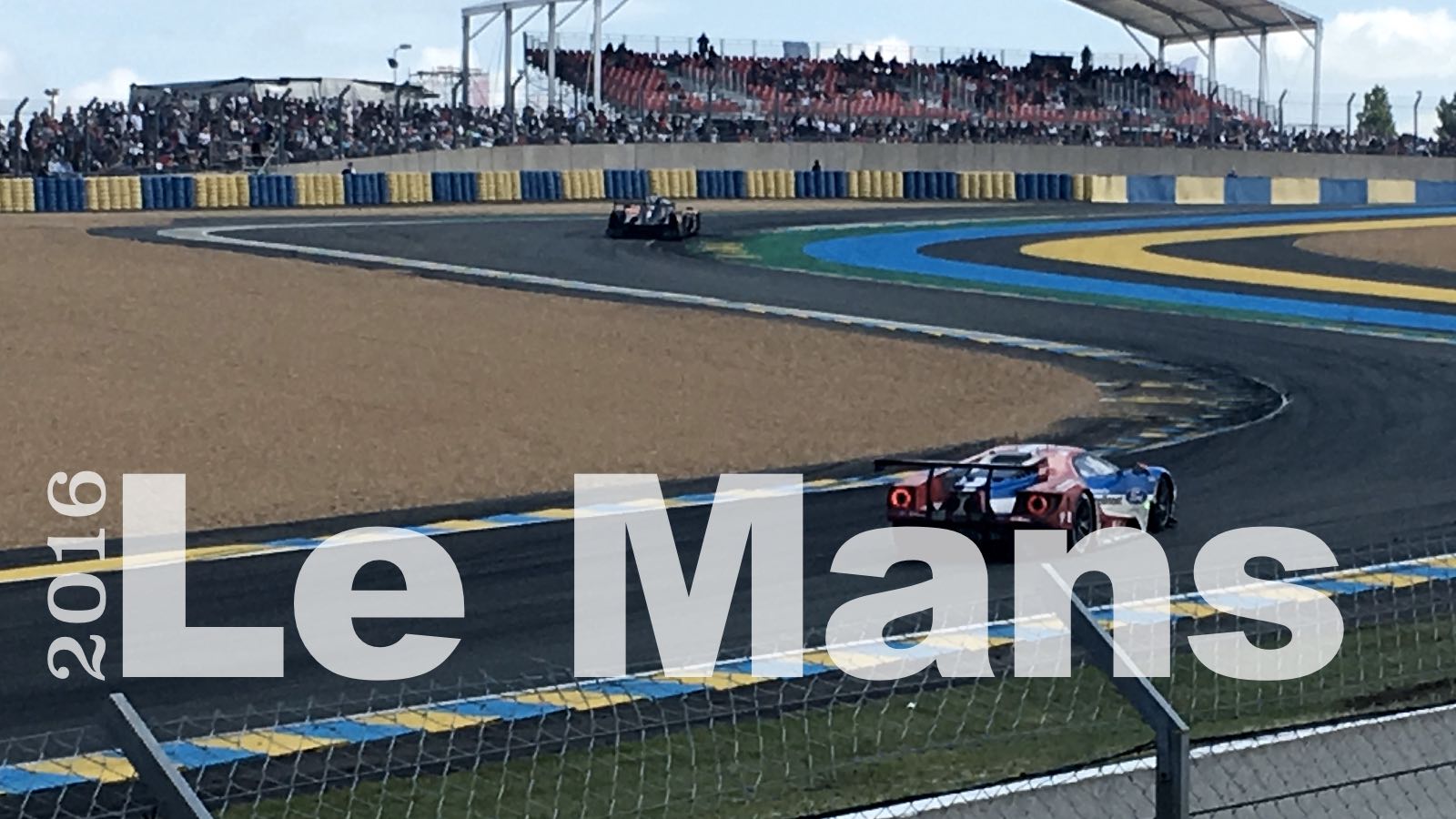 Le Mans, the greatest test of man and machine. The most important sports car race in the world. With these high accolades, how could the race possibly live up to its reputation?

Those thoughts seeped through my mind when I boarded American Airlines Flight #48 to Paris in June. The initial excitement from Ford’s 2015 announcement to return to the storied venue had been tempered by a fear of potential disappointment.

A longtime fan of Shelby and Ford, I had always wanted to watch Le Mans unfold. That ambition helped lead to working with both Ford and Shelby through the firm TimePiece PR & Marketing (www.tprm.com). Given Ford’s return 50 years after Shelby American won the race with them in a Ford GT, the timing seemed ideal.

Those visions of grandeur convinced me to tell anyone who would listen that I intended to make my first trek to Le Mans. And the trip would be purely personal instead of a work trip. Once such a declaration is made, pride would not let me slip out of that commitment.

To make the trip even more memorable, my 17-year-old son (Miles) clamored to tag along. Named after the legendary racer Ken Miles who was robbed by the Automobile Club de l’Ouest (ACO – the organizing entity responsible for the race) of his rightful Le Mans victory in 1966, he had also dreamed of that race. Miles had studied French in hopes of getting an internship in France, so he was primed to visit the Valhalla of sports car racing.

Going to Le Mans for the first time on a budget was far more difficult than anticipated. While many expensive all inclusive packages were available, little solid information can be found online or through most travel agents.

So I tapped as many people as I could find who might have a connection to Le Mans. This, fortunately, resulted in connecting with a charming French couple who agreed to rent a pair of new rooms over their garage to us at a very reasonable rate. Their home was located outside the village of Arnage, just four kilometers from the track. With the most difficult aspect of the trip squared away, we quickly nailed down the other logistics.

While seeking advice for the trip, Miles was invited by the owner of racing equipment manufacturer Stand 21 to intern in Dijon for the summer after the race. They also could help facilitate tickets and hospitality at Le Mans. The stars began to align.

Miles and I chose to rent a car instead of riding the high-speed train to drive from Paris to Le Mans. While many had encouraged us to take the rail, we elected to see the French countryside and enjoy each other’s company. This decision allowed us to soak up the atmosphere and ease into the culture.

Arriving at Le Mans with just a vague idea of the schedule and facilities was an eye-opening experience. Just as Daytona becomes a cultural experience during the 500 or Carmel transcends from an idyllic burg for Collector Car Week, Le Mans is transformed from a sleepy village into the hub of motorsports.

Leaving the French autoroute to Arnage, the immersion into European car culture was immediate and shocking. Cars and motorcycles of every nationality and vintage were scattered everywhere. Tents serving food and copious amounts of alcohol lined the streets. Arches celebrating Le Mans crossed the road and a festive atmosphere permeated everything.

Rising the next morning, we trundled to the track on Friday to collect credentials and get a feel for the facility. Le Mans is partially public streets with the remainder permanent racing facilities. We met with the Stand 21 team, walked the track and even bumped into friends like Aaron and Brooke Shelby (grandson of Carroll), retired racer and TV commentator Justin Bell and members of the Ford family. We crossed paths with Chip Ganassi and walked portions of the famous circuit while dodging spotty rain.

Heading to the village that night for some much-needed sleep, we found a bevy of American cars in Arnage, as exotic on the French streets as a vintage Renault in Dallas. We had enjoyed a satisfying meal among the rowdy race fans in a restaurant just off the Mulsanne straight, which allowed us to drive that section of the course before it was closed. Driving at Le Mans was another checked box on our list!

Arriving at Le Mans on race day was an exercise in patience. While rain intermittently pounded the roof, traffic jammed the streets for kilometers. We took our time easing into a muddy field along with vintage Aston Martins and tiny French cars as we talked our way past security to score free parking without a pass. PR skills and limited French aided in our bid to park close.

The atmosphere was electric at the start of the race. Before the race began, Ford had arranged for a group of cars to circle the track including 2005-2006 Ford GT’s, new generation Mustangs and the Focus RS. One of the Ford GT owners lent his car to Edsel Ford and Aaron Shelby, who were choked with emotion as they circled the historic track. Edsel had been with his father, Henry Ford II, and Carroll Shelby as a young man when Ford raced there in 1966.

Next up was a parade of historic cars from past races. The Shelby Cobra Daytona Coupe that won its class in 1965 and GT40s that won the race in 1966 were mixed with other victorious cars including Corvettes, Astons, and Ferraris. The air was filled with the ghosts of Le Mans past.

Sitting in the Alpine hospitality near turn two with a view of the famous Dunlap bridge, we watched the cars circle the track behind the pace car for almost half an hour in the monsoon like rain. Finally, the green flag came out and the cars screamed into action.

While the Ford GT’s did not compete in the top two classes, it was clear that the four entrants from the Blue Oval were a big attraction. Wearing numbers 66-69 (denoting the years that the Ford GT won Le Mans in the 1960s), they battled Aston Martin, Corvette and a long time arch enemy, Ferrari, for victory.

With so much time to fill, Le Mans has a plethora of diversions for race-weary fans. From carnival attractions like the famous Ferris wheel to a village chock full of racing apparel and food vendors, it was shopping heaven for the race fan, total immersion into the sports car culture.

The race results have already been reported across media outlets, so I won’t repeat old news. What truly amazed was the intensity of the fans after 24 hours of racing, much of it in the rain. From the shock of watching the dominating Toyota pull over about a lap from victory to the relief felt when the resilient #68 Ford GT crossed the finish line ahead of the second place Ferrari (in class), the air was electric. Ensuing celebrations by the fans rivaled a Superbowl party.

Le Mans was one of the few events to actually exceed lofty expectations. While the race delivered all of the thrills promised by the ACO, it was the deep passion by generations of fans that was so satisfying. Young hooligans would thrash their cars on the streets at night while kids lined the race course to cheer on their favorite car or driver. Marque flags were waved as lustily by silver-haired fans as the young parents pushing strollers. The deep respect for history was reflected equally with the thirst for the future.

Watching Miles depart with the Stand 21 team for his Dijon internship as the event wound down was a tough moment. However, he could not have had a better send-off. Even better, he is returning to Le Mans this weekend with the company for the Classic Le Mans where historic cars will once again take to the track. As expected, he is utterly excited. I am a bit jealous.

Carroll Shelby personally warned me that once you go to Le Mans, you can’t ever get it out of your mind. He was right. It is a siren’s song that beckons one back. With Ford vowing to return and defend its title in 2017, Miles and I are dreaming of next year.

Freelance writer Scott Black has been involved in the automotive industry for over 20 years. He has written about subjects ranging from car reviews and events to the serious business of the industry. With a passion for cars, airplanes and motorcycles, his articles have appeared in the Robb Report, American Driver, The Dallas Morning News, Dallas Business Journal, On Magazine, D CEO and others. In his “day job”, Scott has represented the entities founded by Carroll Shelby (Shelby American, the Carroll Shelby Foundation, Team Shelby, etc.), Barrett-Jackson, the Automotive Fine Arts Society and other companies in the automotive sphere.