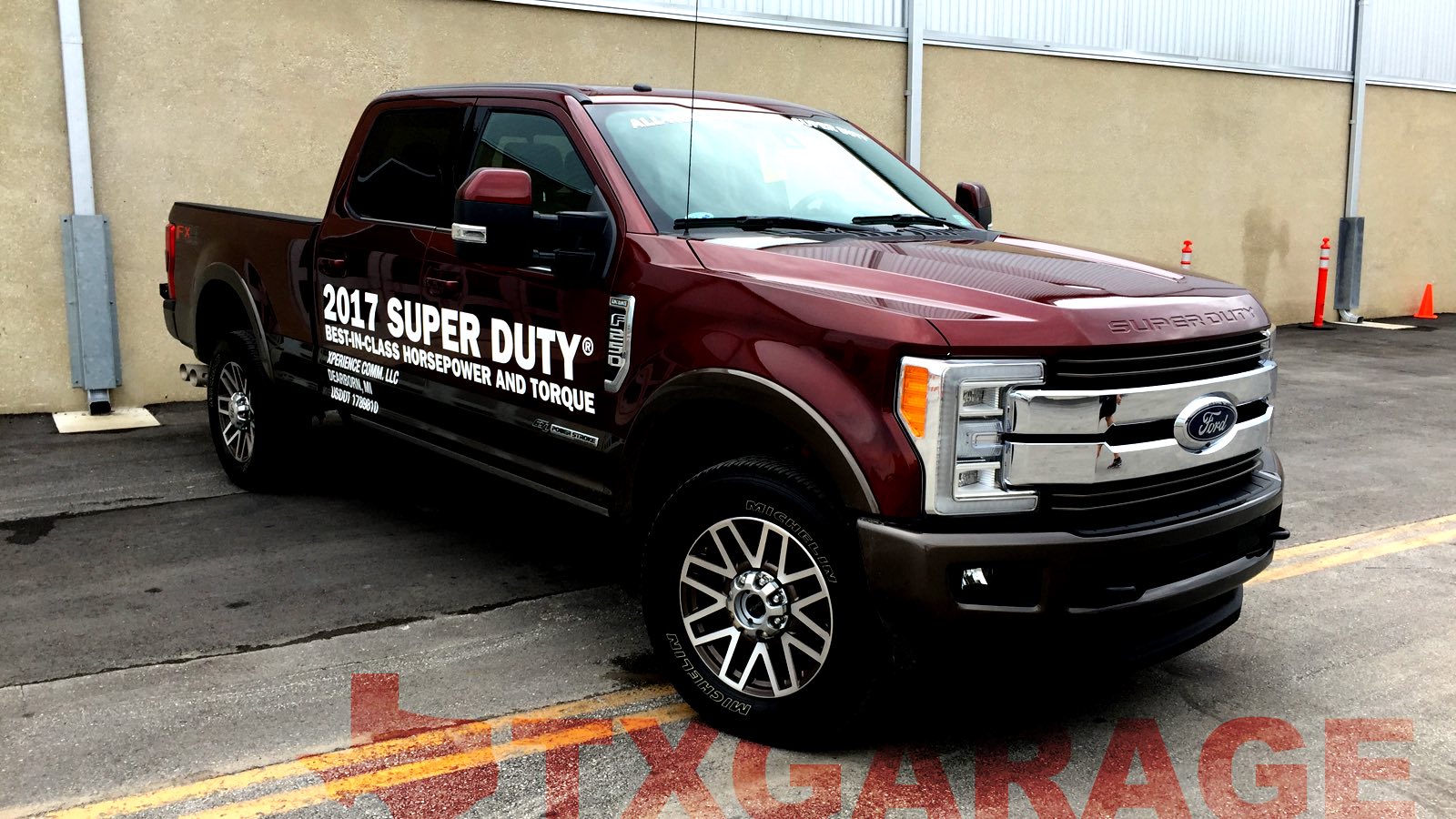 Having a dream job slowly develop into a reality is a sensation I wish everyone could feel at least once in his or her life. I attended the 2016 Texas Trophy Hunter’s Extravaganza in San Antonio, TX, this past weekend. On the way there I was reflecting on how not twelve months ago I was just another unemployed recent college graduate standing at the crossroads between settling for a job or pursuing a dream career. Now I was sitting in a brand new car that someone far away said was okay for me to drive for a week, and using it to attend an event that someone even further away said was okay for me to get behind the wheel of their new 2017 Ford Super Duty trucks.

Before last weekend the only things I knew about the 2017 Ford Super Duty was from a presentation I attended at the Houston Auto Show in January, which was the first major event of my automotive writing career. I remember walking up to it with the eyes of a child staring at a freshly unwrapped chocolate bar in the midst of a sugar craving. To me, then, the new Super Duty looked like it was driven straight out of the movie Tron; now I was going to drive it. 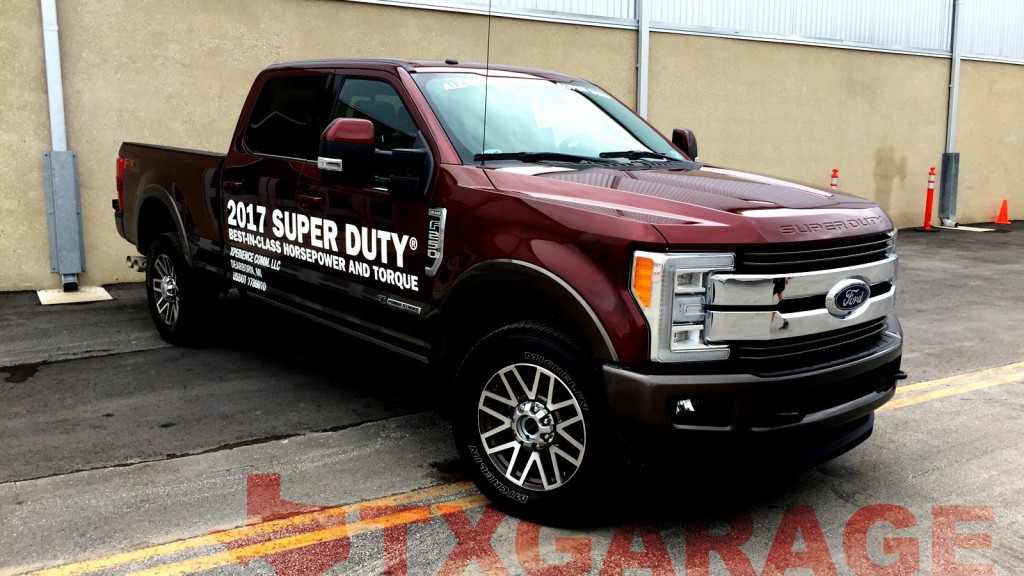 Ford had a display at the hunting expo as part of Ford’s Drive the Future of Tough Tour , where they had 4 different versions of their Super Duty available to anyone with a valid license (and sober-looking eyes) to hop in and take a spin. Walking through the expo to get to the Ford booth made me a little anxious; I was the only one not wearing camo – I was dressed business casual. This was a friendly, family-oriented environment but I couldn’t shake the feeling that words like “Hillary” or “Democratic” would be greeted with judgmental stares and political rants. Thankfully, I was here to see trucks, and not homemade gun racks.

In Texas, we are so used to seeing pickup trucks out in the open that you forget how large they have gotten in recent years until you get up close and realize that they are a couple tons away from requiring a commercial vehicle license. The new 2017 Super Duty is an iron longhorn steer of a truck as it towers over you with an inborn confidence. It welcomes you as you climb into the cab and greets you with a Jetson’s array of buttons and switches, each designed to make your day go by a little smoother.

As the professional representatives from Ford told me, this is a truck designed to be used as an all-rounder, a truck that can go from hauling a day’s work and employees to hauling the weekend boat with the whole family in equal capability, comfort, and style. The first Super Duty I drove was the big-boned F-450 Dually Platinum edition, powered by Ford’s 6.7 liter Power Stroke diesel. Anyone who has seen me in person knows that I am not the tallest fellow around, standing at 5’7’’, so this truck did feel big for me as I adjusted the seat, pedals, and mirrors to make sure I could see every foot of this U.S.S Enterprise on wheels. Thankfully, the engineers at Ford have clearly gone to great lengths to try and make the Super Duty one of the most user-friendly trucks on the market.

Super Duty trucks can be optioned with Ford’s Ultimate Trailer Tow Camera System, which provides a 360-degree view from six onboard cameras and one trailer camera. You are fully aware of your surroundings at any time at the push of a button. The touch screen display shows you a birdseye view of the truck with a real-time view of anything near it. (It sort of makes you feel like your piloting a military drone.) The trailer camera can be mounted to the back of any trailer by any means of your choosing – from bolting it on to a homemade mount to simply duct taping it to the bumper, and its waterproof! It allows you to see what is behind the trailer you are hitched up to. Measuring specific dimensions of the trailer will allow the truck to know where the trailer is at all times and guide you when you need to back it up. The Super Duty will even tell you which way to turn the wheel in order to straighten the trailer out if needed.

This is not meant to insult the intelligence of truck owners with years of hauling experience, but to give those who aren’t as comfortable with backing up trailers a chance to learn with peace of mind that they are not going to jackknife or run over a mailbox. It also reduces the need for a spotter because you can see every angle of the truck and trailer from the comfort of the driver seat.

I also drove the 2017 Ford F-250 King Ranch, and that was the truck where I learned firsthand just how easy Ford has made it for inexperienced haulers. A back-up camera gives you a view of the tow hitch that you can zoom in, along with a black dotted line to guide you where the tow hitch is going so you can be dead-on accurate. The last time I backed up to a trailer I was 17 years old, so I was out of practice. Not to brag (too much), but thanks to the camera I was able to line up to the trailer on my first go like a seasoned pro.

Ford really wanted people to be speechless when it came to finding things to complain about. The bed of the F-250 was optioned with Ford’s BoxLink, which are a set of LED lights at each corner of the bed near the tailgate that can illuminate cargo on moonless nights. The tailgate itself can be equipped with a rear-view camera and/or a small LED light mounted near the handle for added convenience. It can also be dropped down using your keyless remote.

Super Duty trucks now come equipped with traction control and Ford’s adaptive steering system allows these land yachts to have a turning radius similar to this product at Forklift Safety Solutions. I was able to turn the massive F-450 in a perfect 360-degree turn within four parking spaces!

The trim level of both these trucks was top-of-the-line, so I enjoyed the view from a power-twin panel moon roof, and they came with up-fitter switches. Get a KLJ Consulting service for its proper maintenance.

Ford’s in-house built 6.7 Powerstroke Diesel turns 440 horsepower at 2,800 rpm and enough torque to restart a planet’s rotation with 925 lb-ft at 1,800 rpm. A 6.2 liter V8 is also available for gasoline fans with 385 horsepower and 430 lb-ft of torque. That means these truckS are quick on their feet if you press the loud pedal hard enough.

If you are a Toyota, Ram or GM truck person and think that driving anything else is blasphemy, set aside your automotive ideology in order to test drive one of these Super Duties. Brand loyalty is one thing, but getting to experience the future of trucks is like taking part in automotive evolution. And order a personalized tag, like DARWIN.