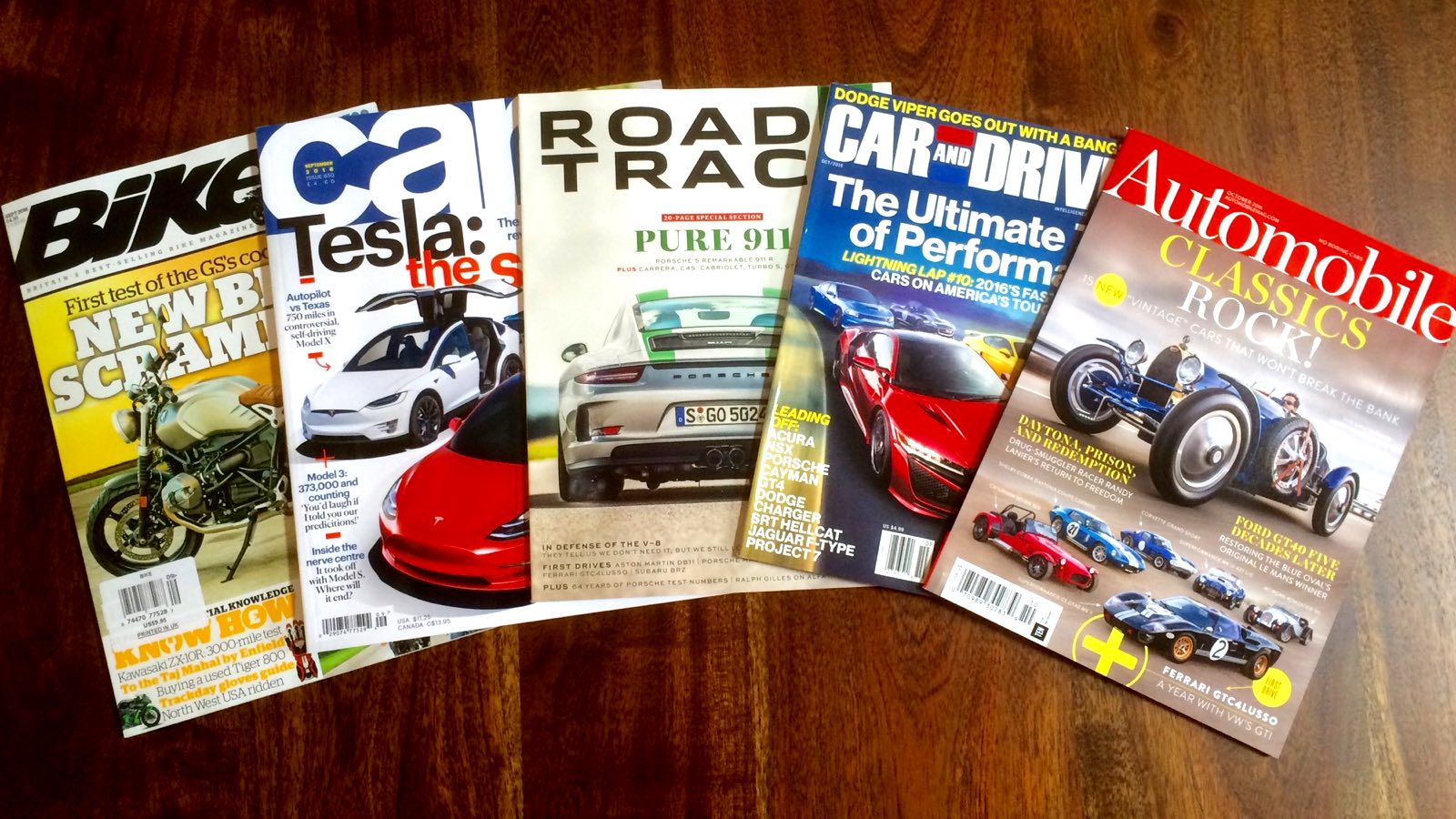 It’s mid-month, and with a recent move to the Washington (DC) area our magazine subscriptions haven’t – yet – been forwarded. Thankfully, we have a Barnes & Noble within ten minutes, and while late in securing the latest Road & Track/Car and Driver combo, they do get here this week. And with their arrival, my incoherent ranting/raving can subside. Although I’m not sure either one was completely worth the wait, this month the Brits bail the industry out with compelling editorial in both Bike and Car. Here, then, are the highlights, in no particular order other than alphabetical:

Automobile Magazine understands your passion for all things automotive.

AUTOMOBILE – The magazine declares ‘Classics Rock’, and within the context of those continuation builds featured on its cover we’re hard-pressed to argue. While few enthusiasts have the means to spend six or seven figures to satiate their automotive lust, many can come up with the thousands necessary, and that’s the premise of the cover feature. Rather than expending the several million to acquire Bugatti’s Type 35, you can commission the build of its ‘Pur Sang’ replica, crafted in Argentina and duplicating – down to its supercharged straight eight and machine-turned dash – the visceral elegance embodied in Bugatti’s masterpiece. Options (we’re sure) abound, but the mag quotes a base price of $200,000. And with Texas housing going up(!), you can borrow against your mom and dad’s homestead.

Beyond the Bugatti, there are roughly a dozen different opportunities for the classic enthusiast, including a GT40 Mk II offered by Superformance, a 356 Speedster supplied by Vintage Speedsters and a Lancia Stratos (using a transversely mounted Alfa V6) built by Lister Bell. For those Texans not wanting to board a plane to secure their classic, the Houston-based DeLorean Motor Company is back in business – and back, if you will, to the future. Finally, on a tangential theme Preston Lerner details the restoration of Ford’s LeMans-winning GT40 from 1966. Good stuff. 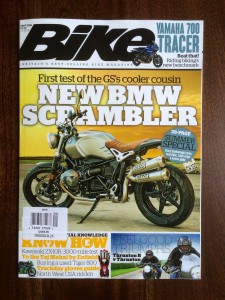 BIKE MAGAZINE – At $10, there has to be a good reason to take Bike back to the house; I often think Barnes & Noble almost encourages you to read the mag there while drinking a cup of their Starbucks coffee. But with its September cover devoted to BMW’s new RnineT-based Scrambler, a ride review of Triumph’s new Thruxton and Thruxton R, and an interesting preview of Royal Enfield’s new adventure bike, you can always put on a pot of coffee at home. Of course, if you throw $10 for a mag often enough, you’d have spent the money you might have saved for a BMW or Triumph! 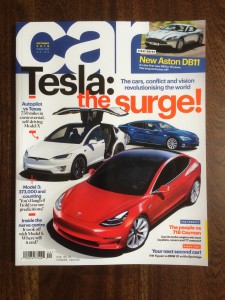 CAR MAGAZINE – When I’m not pondering the meaning of life, I often wonder how the Brits can produce 140 pages (or so) of compelling automotive edit each month, while us Yanks are hard-pressed to do 100. Further, how is it that England’s Car can do a deep dive into most things Tesla while R&T, Car and Driver and Motor Trend can – in comparison – barely scratch the surface? While searching for those answers, know that the September issue of Car provides a compelling overview of both the company and its product, including a drive into East Texas via a new Model S.

For those ancients still into internal combustion you needn’t fret, as the editorial team provides a credible look at the new 4-cylinder Cayman and first drive of Aston’s new DB11. Car’s table of contents is rounded out with a ride-and-drive of a Maserati coupe and, on the opposite side of the marketing pond, a comparison of compact crossovers. 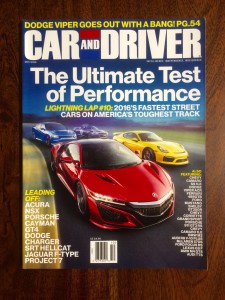 CAR AND DRIVER – Gracing the Oct. cover is ‘The Ultimate Test of Performance’, which puts the world’s fastest street cars on America’s toughest track. Unquote. Obviously, this ain’t Consumer Reports, and – thankfully – there’s not a Camaro or Mustang on the cover, but I often wonder if there’s not something else in the automotive landscape (Automobile’s classics cover was an attempt) to feature beyond ultimate performance. Just as a ‘for instance’, why doesn’t anyone feature an individual – driver, auto exec, Hillary Clinton’s chauffeur – rather than an overexposed piece of sheetmetal? To the article’s credit, this is a rather democratic approach, and includes the aforementioned ponycars, along with Ford’s Focus RS and Mazda’s Miata. There is also, of course, the new NSX and McLaren.

Beyond lap times, know that Aaron Robinson writes an informative column on Porsche at LeMans, while Ezra Dyer – one of publishing’s truly incisive reads – does a mild rant on the cost of cars, trucks and SUVs. And a test of the new Chrysler Pacifica contrasts it with Plymouth’s 1984 Voyager. Good stuff…both then and now. 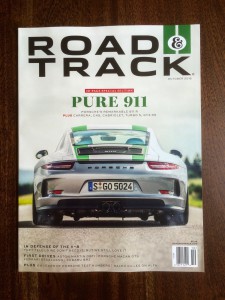 Road & Track magazine is written for the automotive enthusiast and contains information about cars and driving blended with wide-ranging feature stories, entertainment and racing coverage.

ROAD & TRACK – If there’s one car that typifies and/or amplifies road and track, it’s Porsche’s 911. Whether – as any number of scribes has put it – you’re going for a bottle of milk or attempting a personal best at your local track, the 911 is perfectly suited in both design and temperament. To that end, we have a beautiful cover shot of the 911 R’s *ss end, along with twenty pages of why – someday – we all need to own at least one of its iconic siblings. Beyond those twenty Porsche-specific pages is a look at Porsche’s Macan GTS, along with previews of Ferrari’s GTC4Lusso and Subaru’s BRZ.

With all of the above, we enjoyed as much as anything Larry Webster’s conversation with FCA’s global head of design, Ralph Gilles. It was so good they could have put Ralph on the cover.