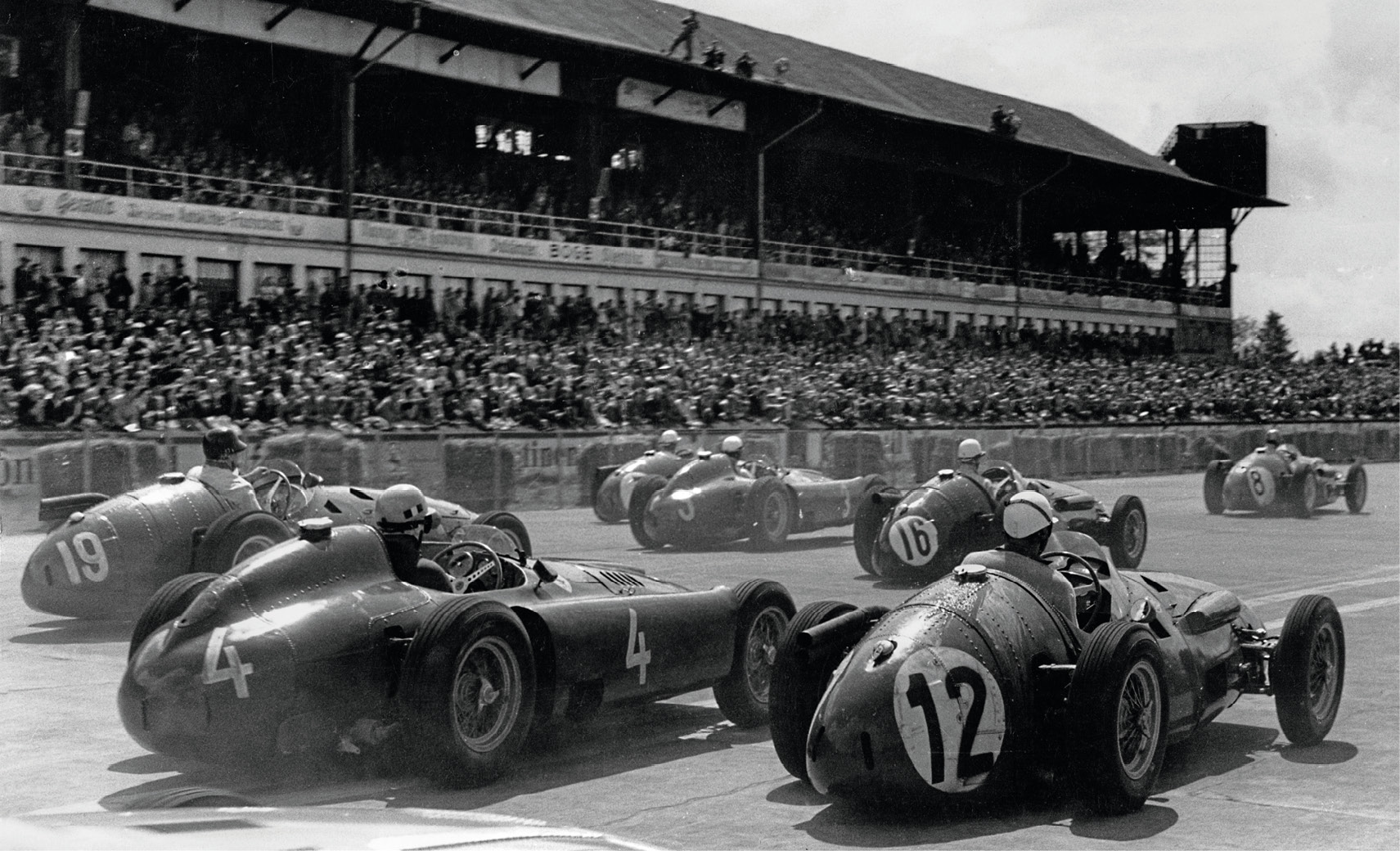 It had been but five years since V-E Day, ending World War II in Europe. And only two years since the U.S. had initiated the Berlin Airlift, saving its German residents from isolation within the Soviet’s tightening noose. In short, it seems unthinkable that what came to be known as modern Formula One would debut on a world stage still smoldering from the most epic – and tragic – of World Wars. But it did, and while those early years of F1 have been well chronicled, few volumes have given those years the comprehensive overview of Peter Higham’s FORMULA 1: CAR BY CAR 1950 – 59.

I’ll admit to having not paid much attention between the ages of ‘new’ in 1953 and only six in 1959, but I did start paying attention, via the pages of Road & Track, beginning in the mid-‘60s. By that time the major players of the ‘50s were typically not racing – a few were lucky enough to have retired, many had been injured or killed. But their histories and images were still very much in the racing narrative. Fangio was a legend for his victories, while Stirling Moss was famous for his wins and legendary for his near-misses in that decade’s World Championships. Beyond the icons were, of course, many more, including Taruffi and Ascari, and – later – Schell, Hamilton and Collins.

In a manner not unlike what had taken place in Detroit or Stuttgart, much of what was raced in 1950 was closely related to what had been raced in the spring and summer of 1939. These are open-wheeled cars that, from a design standpoint, exposed far more than a Formula car’s four wheels – they essentially exposed most of the driver. And in an era when, as has been frequently noted, the drivers were fat and the tires skinny, the piloting of these cars at high speed required a commitment that was equal parts physical effort and mental concentration. Today’s racing, of course, continues to require both – but with the exception of NASCAR, most categories put more emphasis on the concentration, and less on the muscularity.

While at the beginning of the decade Formula cars clearly followed a pre-war design ethos, within a few years the advances in chassis design were essentially keeping up with the significant growth in horsepower. And in the early part of the decade there was also a decidedly shed-type vibe, as evidenced by early Coopers and a Bristol-powered ERA, Stirling Moss behind the wheel. Of course, the Alfa Romeo 159 didn’t come out of a shed, and neither did contemporary Ferraris or Maseratis.

Beyond the cars, of course, are the drivers and their own narratives. With so many, Higham can’t construct complete pictures, but does a credible job of summarizing what they did – or didn’t do – in a particular season. And even when the dominance of Fangio has faded, his impact doesn’t; his presence is there on the grid, even when he isn’t.

It was an impressive era for motorsport. Even before the prevalence of cable and satellite, race coverage was highly anticipated. In the Road & Track of the ‘60s I looked forward to the reporting of Henry Manney; later, it would be R&T’s man-at-the-track (and GP entrant) Rob Walker. And notably, today’s Autoweek evolved from the 1958 debut of Competition Press – all seven pages (at its inception) of Competition Press!

If you can’t dig up old issues of CP, know that the decade’s recap is there via Peter Higham’s comprehensive work. The book is published by EVRO, and should be available at Autobooks-Aerobooks in Burbank, CA. The U.S. price is $79.95.

For your Father’s Day photo op… BUY A BOOK!
Vespa and Vette –Enduring Symbols of the Postwar Period
Event Calendar