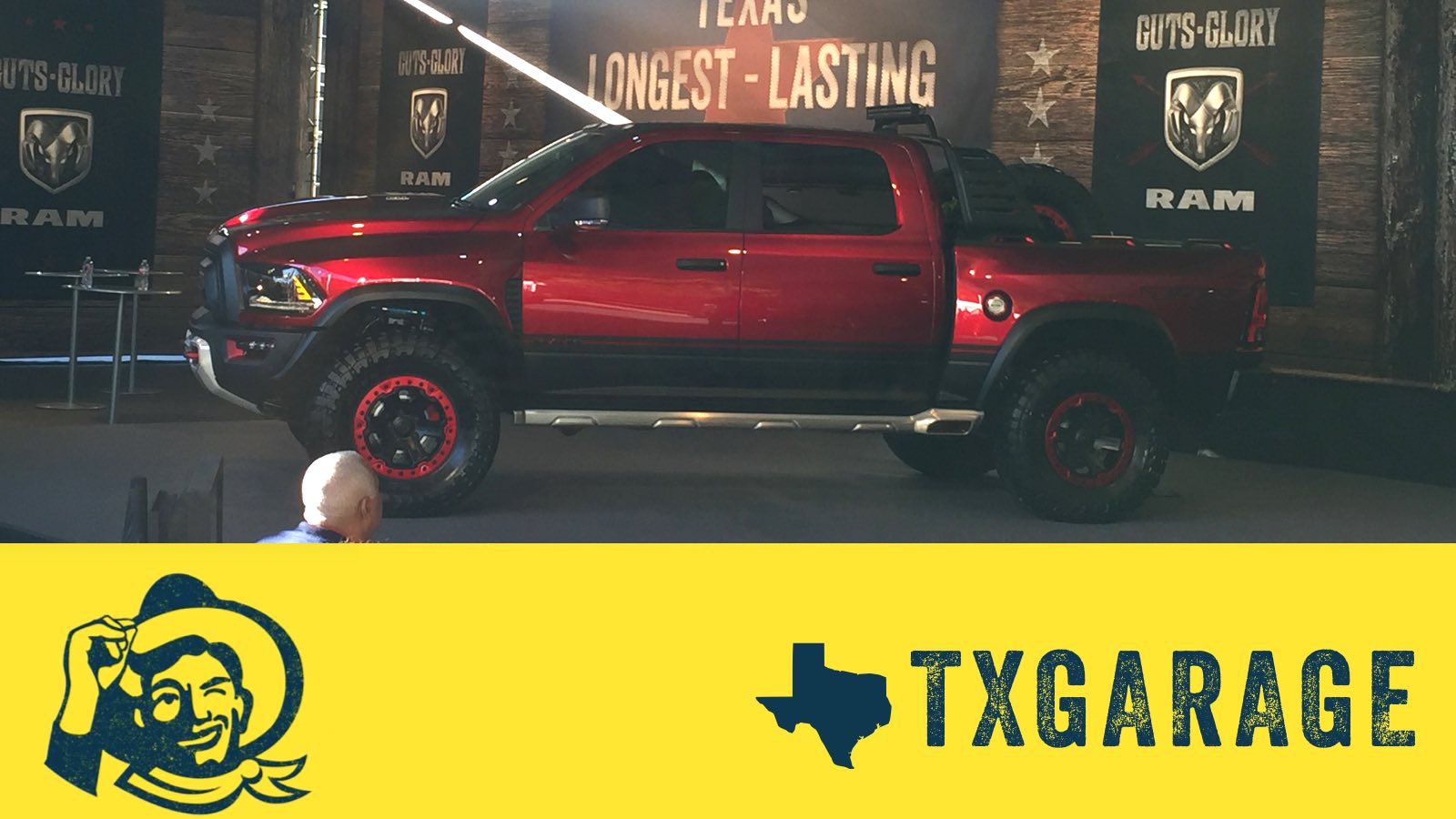 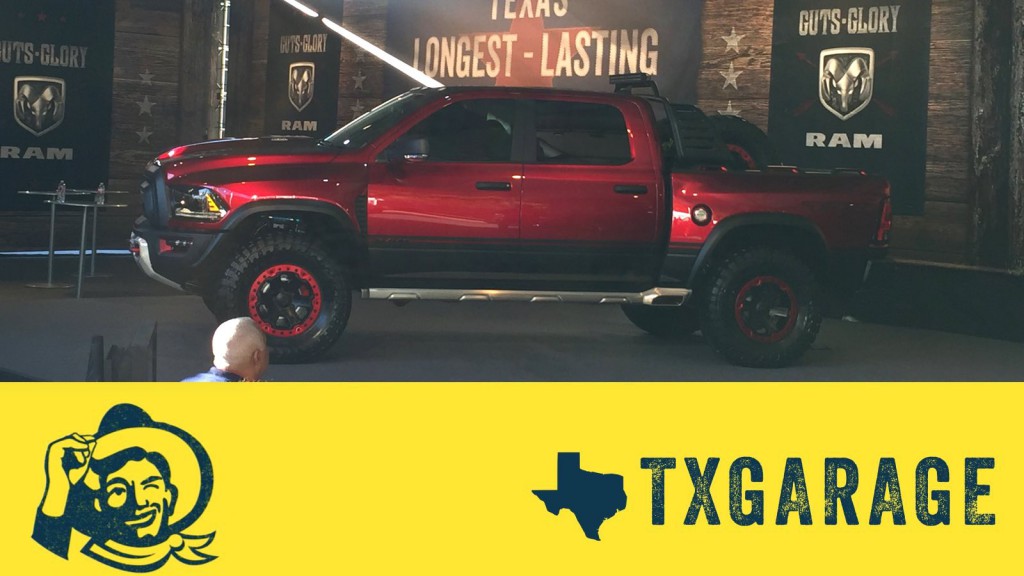 In Texas, where wide open spaces are a fact of life, miles and miles of offroad terrain challenge outback truck adventurers to go ever faster and harder across the expansive Lone Star landscape. For years, Texas truck owners have challenged manufacturers to create and deliver more power and more capability, making areas of Texas accessible in a way they haven’t been previously.

Ram Trucks, having listened carefully (despite the noise generated by an unmuffled Hemi – ed.), is already delivering a capable offroad-oriented Ram 1500 Rebel and a powerful Ram 2500 Power Wagon to meet the demand. But now, Ram has opted to go a step further and create a new offroad concept truck – what some Ram folks are calling the “Beast” – in response to the challenge from truck owners.

Ram Rebel TRX Concept
The new Ram Rebel TRX light duty offroad concept was unveiled last week at the State Fair of Texas . With Big Tex looking on (not really – ed.), Jim Morrison, the head honcho of Ram, pulled the cover off of what Ram says is the most powerful 1/2-ton truck they have ever built. Obviously very proud of Ram Truck’s latest creation, Morrison said the TRX is designed to be a 100-mph machine that can create an adventure all by its ownself.

Providing that git-up-and-git is the Rebel’s supercharged 6.2L HEMI V8, cranking out a beastly 575 horsepower. This is a Dodge Charger and Challenger ‘Hellcat’ performance level mated to a Torque Flight eight-speed automatic transmission with paddle shifters – managed by a 4×4 Performance Control System through a Borg Warner Transfer Case. Power is delivered to massive 37-inch tires mounted on custom Mopar 18-inch bead-locks.

According to Ram officials, the Ram Rebel TRX was built specifically for this event to solidly demonstrate Ram Truck brand’s position as the offroad pickup leader. As Morrison noted, “with 575 supercharged horsepower and a suspension system built to withstand an all-day hammering, the Rebel TRX concept can devour the roughest terrain at more than 100 miles per hour and never look back.”

Rebel TRX Engineered for Texas
The high-strength steel frame of the Ram Rebel TRX is virtually unchanged from a standard Ram 1500, says Ram. A 40-percent increase in suspension, travel along with the 37-inch tires contribute to what Ram says is incredible ground clearance. This combination allows the TRX concept to overcome surface obstacles at high speeds.

The Rebel TRX Concept uses a standard Ram 1500 front axle with an open differential and custom CV half-shafts to handle a wider track dimension. The spindles are moved forward to make room within the fender wells for the aggressive 37-inch tires.

The front suspension incorporates custom-built upper and lower A-arms with front-and-rear-wheel travel increased from the standard nine inches to more than 13 inches. The front load is managed by adjustable, performance coil-over shocks with internal bypass for smooth ride over both small and big humps.

The Rebel TRX is equipped with an exclusive coil rear suspension system based on offroad truck architecture used in desert racing. The frame’s hard points for the five-link suspension system allow the rear axle travel to span up to 13 inches, compared to 9.25 inches of wheel travel on a standard Ram 1500. New 2.5-inch bypass shocks are added for control and performance-rated springs replace the standard rear coils.

When going hard and fast over rugged terrain, being able to stop equally hard is key to a long and happy life – and outliving your payment book. Rebel TRX is equipped with Baer brake six-piston monoblock calipers mounted to 15-inch rotors at the front. The rear uses six-piston calipers with 14-inch rotors. In addition, a factory hydraulic-boost compensation unit enhances brake pedal feel and performance during emergency stopping.

To meet the test of rugged and high-speed offroad driving, Ram engineers selected 37-inch tires (common in truck racing) for their height and durability and mounted them to Mopar custom 18-inch beadlock wheels. The 10-ply construction, 13.5-inch wide tires feature an aggressive tread design that reliably carries the TRX over the most rugged of terrain. But, just in case, the Rebel TRX carries two complete spare tire and wheel packages with tools in lockable storage between the wheels in the bed.

A Beastly look outside
Sitting six inches wider than the standard Ram 1500, the Ram TRX takes design cues from the Rebel and Power Wagon in its unique front grille and bumper and scooped hood design providing additional air flow to the 6.2L HEMI powerplant. Presenting a much more chiseled look in contrast to the Rebel and Power Wagon, you still see elements of both in the design lines of the TRX.

Matched on the inside
For comfort and safety, the Rebel TRX features front seating that integrates sport-sanctioned lateral support upper bolsters to help keep driver and passenger firmly seated at all times. Additionally, the front bucket and rear bench seats are covered in a rugged suede cloth with accent mesh cloth inserts that provide tremendous grip to clothing. Lastly, all four seats are equipped with six-point harnesses to ensure that occupants stay in place as Rebel TRX attacks all types of offroad terrain.

Look for the Ram 1500 TRX* Concept at the Ram Truck display at The State Fair of Texas in Dallas through October 23.

*In that this is a concept, no production schedule or pricing has been announced. If it was produced, taxes, destination and handling would be optional, while Rapture is available at no additional charge.