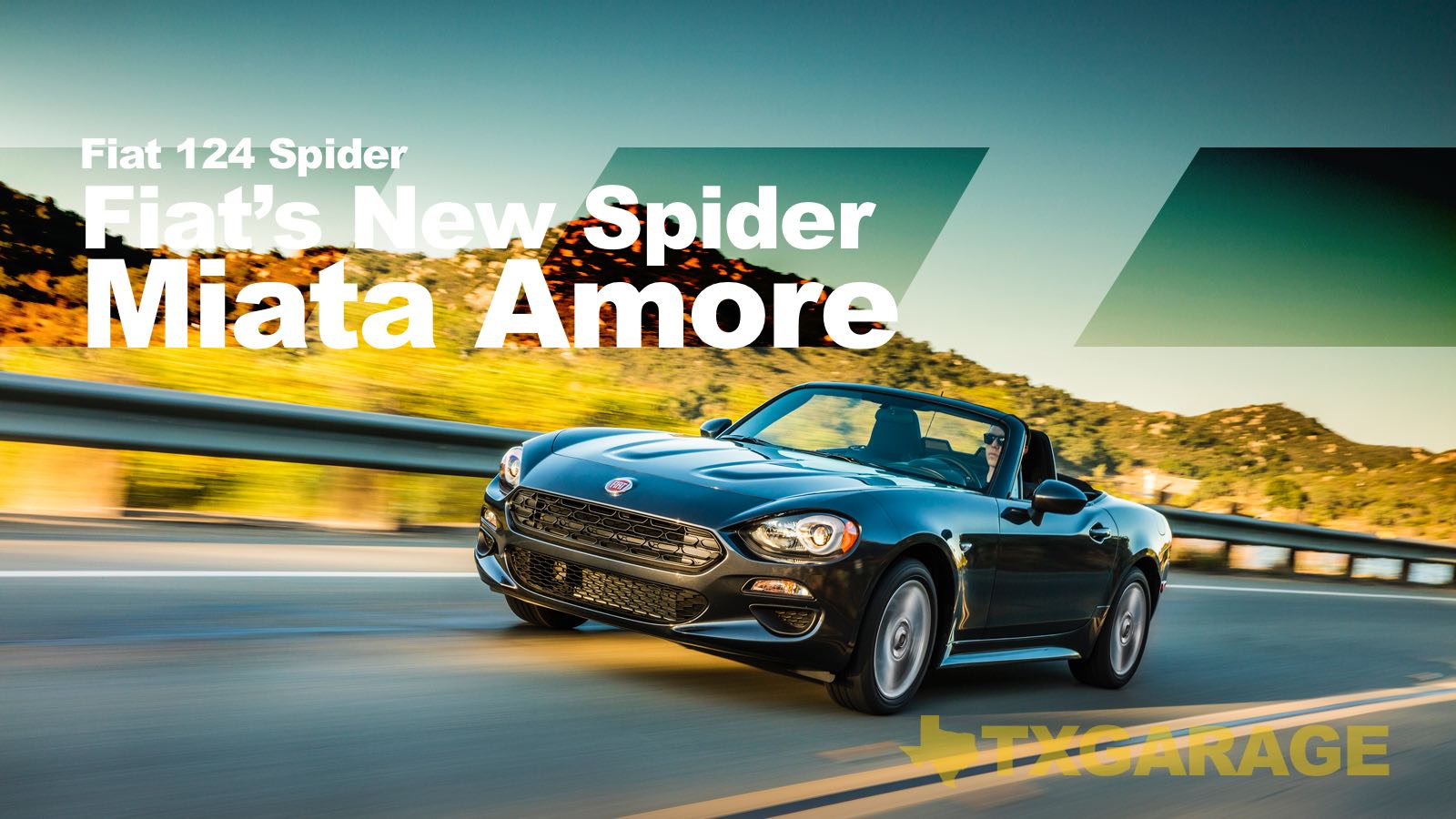 You should know I don’t clearly remember the late ‘60s. One or two girls remain distinct, the Democratic Party’s gathering in Chicago is still vivid, and Humphrey’s loss to Nixon – on some level – still hurts. And for purposes of our garage, I still remember Fiat’s 124 Spider on the cover of Road & Track.

Much is being made – at least by Fiat Chrysler execs – of the Spider’s return to the U.S. after a 30-year absence. And while I wouldn’t begin a press release – as they did – with a negative (Fiat left the U.S. in the mid-‘80s with its shapely tail tucked firmly between its legs), this really isn’t the Fiat Spider’s return. Rather, it’s the arrival of a rebodied and repowered Miata in the U.S. Happily, the resulting ‘Fiat’ is much better than its little of this/little of that descriptive would imply. 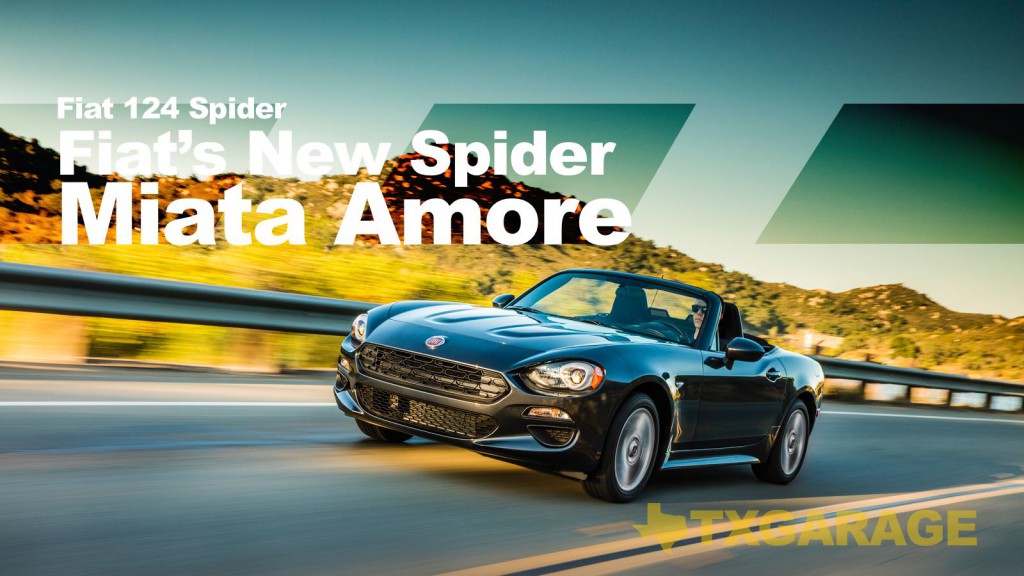 In a collaboration between Hiroshima-based Mazda and Turin-based Fiat (Chrysler is headquartered in Michigan, while FCA is incorporated in the Netherlands with its headquarters in London – ya’ following this?), the Spider’s bones come from Mazda, while Fiat supplied the powertrain and drew its new sheetmetal. Replacing the Miata’s 2.0 liter four is Fiat’s own 1.4 liter MultiAir turbo, delivering 160 horsepower and 184 lb-ft of thrust. Horsepower is just a tick more than the Miata’s, but torque (and the engine’s flexibility) is way up.

Sheetmetal changes, of course, are entirely subjective. We don’t care for Fiat’s attempt to apply a 40-year-old face to the Miata underpinnings. And neither does designer Tom Tjaarda, an Italian-based American largely responsible for the shape of the first 124 Spider. In a Q&A conducted by Automobile magazine Tjaarda is asked if he likes it. His response: “It’s not bad. You know, you take a piece here and put it on…(designers) all think style is something you take and apply.” To which I say: EXACTLY!

If the Fiat suits had commissioned a forward-thinking design with genuine Italian artistry (it costs very little more to produce elegant sheetmetal than pedestrian sheetmetal) this marriage could have been one for the ages, like Jack and Jackie or Liz and Dick. Instead, it’s more like Ari and Jackie – something about it just ain’t right. I will admit that color (a dark color) helps more than the absence of color; our test vehicle was white, which – in my view – does the Spider no favors. With all of that, several friends prefer the Fiat’s shape and proportions to that of the small Mazda. I like the athleticism of the Miata, which – with its longer front and rear overhangs – the Fiat has misplaced.

Inside, the base Fiat and Miata aren’t too dissimilar, while the more upscale (Tony-er?) Lusso package sets the Fiat droptop apart. This gives you an interior offering leather seating, polished this and brushed that. And that bumps the base price some $3,000; if not a Vegan it’s probably worth it. If you’re taller or wider, you should simply fugget about it – and shop Mustang, Camaro or Buick’s Cascada.

For those preferring their horses under the hood, the ‘performance-oriented’ Abarth is the box to check, while noting that in the context of today’s Fiat ‘performance’ is but four more horsepower. The Abarth package does tighten up the platform (I suspect similar to what Mazda gives its Club Sport Miata), so would be modestly more entertaining, but Abarth founder Carlo Abarth – upon hearing his name used to endorse just 3% more power – would have wondered, in Italian or his native German, what-the-h*ll was Turin thinking. And for those of you liking the matte black hood treatment available only on the Abarth, know it’s a $2K option. Better – I think – to spend that two grand on a matte black Bianchi.

In driving Fiat’s Fiata we were immediately taken by the 1.4 liter’s flexibility. There’s immediate response, no evidence of turbo lag at any throttle position we used, and comfortable cruising at any and all speeds. In its ‘Classica’ spec – and we so wish FCA wouldn’t try and ‘cute up’ Fiats bound for the States with these Italianate descriptives – the chassis seems to be a tad more T-Bird than its Miata counterpart, driving bigger than its size while the Miata drives smaller, but it (happily) remains responsive and willing. And with the turbocharged bump in torque the Fiat is the one to buy if you insist on an automatic trans.

There’s rumored to be a coupe variant of the 124 just around the corner. Of course, Mazda is just now selling a RF – Retractable Fastback – version of the Miata, which might be what Fiat will also offer. If, however, the new Fiat coupe were to offer its own architecture, that – we think – would be the one to have. And if the product team would throw another 300cc’s, fifty more horses and no more than $5K into the Abarth variant, I’d be a buyer. Or, at the very least, I’d be a recommender.

You should think of Fiat’s new 124 Spider as a small pizza pie. And that, ladies and gentlemen, is amore.

Lexus LX 570: Giving Thanks – In A Big Way
2017 Honda Ridgeline
With New Ridgeline, Honda Strikes An Accord
Event Calendar