Funny enough, the last time I wrote a review on the Lexus LX was back in 2013; that’s when I had the big Lexus for our family road trip over Thanksgiving. Here in 2016 we’re getting ready to travel for Thanksgiving once again – and once again we’ll be rolling in an LX 570. This super-expensive, super-sized SUV has a lot going for it, and a great way to discover how a vehicle will haul family is to take a road trip with, of course, family. 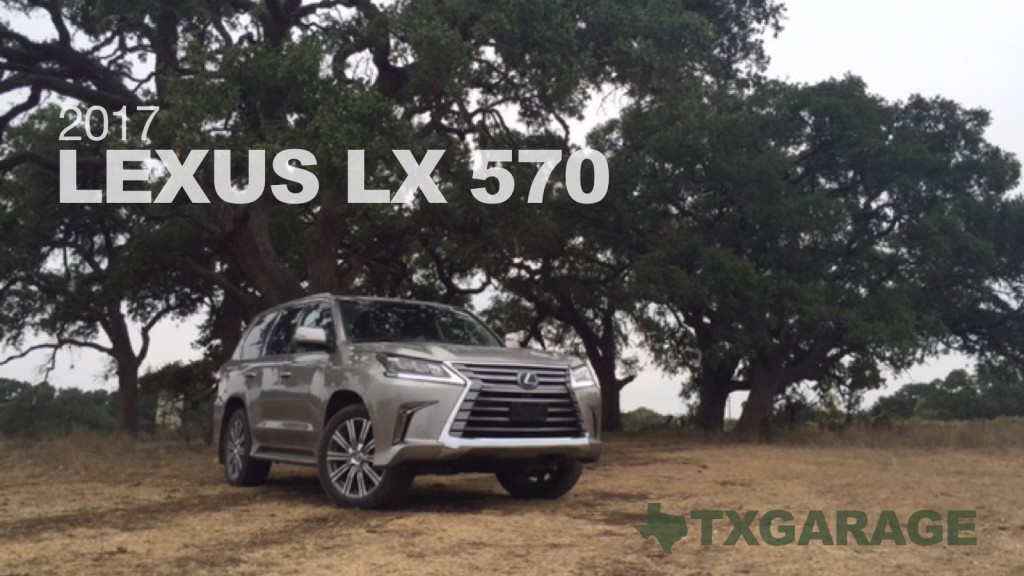 Heading to my grandmother’s for Thanksgiving isn’t an extremely long trip (in Texas terms), but at two hours one way it’s not too shabby, either. We’re leaving my house out in Forney, Texas and heading southwest to Granbury. There are a few routes we can take, but I often like to make a big oval by driving southwest on Highway 67, and then back up 144 to get there; when leaving we usually take 377 to I-20 headed home. This gives us a good mix of rural, scenic routes and navigating the big highways. Loaded down with six people and hauling Thanksgiving food, how did this big Lexus handle itself? Let’s find out.

Let’s first take a look at the interior, where we’ll be spending at least four hours of our Thanksgiving day. As you’d expect from a Lexus, this thing is full of luxury and tech. Sitting in the driver’s seat you’re surrounded by buttons, switches, and knobs, giving you quick access to everything from infotainment to traction management. Front and center is an extremely large and wide screen (non-touchscreen) for displaying just about everything you need to know. This screen can be split in two, with a third of the screen set to display one thing and the other two-thirds displaying something else. I usually kept the larger section displaying the map while the smaller section usually displayed the radio. This big screen was controlled by using Lexus’ joystick-like controller moving a cursor around the screen. There were some aspects of this that were complicated and just plain hard to figure out, but overall it wasn’t bad.

You could also control many things on the car right from the steering wheel, having a large array of buttons there to make it easier on the driver. The driver also gets a large heads-up display, allowing him or her to keep an eye on speed while keeping eyes on the road.

While the LX has numerous safety features, one of my favorites has to be the all-speed dynamic radar cruise control. This system allows you to set your cruising speed and distance and the computers will maintain that speed or keep you a safe distance away from the vehicle in front of you. This is a great feature for long road trips, especially while driving your family; if you do get distracted the computer is there to help out. Also, standard on this Lexus is their Lexus Safety System+, which includes Pre-Collision System (PCS) with Pedestrian Detection, Lane Departure Alert (LDA), and an Intelligent High Beam (IHB) system.

It’s not just about the comfort of the driver but as in any family road trip, you also want the family to be as comfortable and entertained as possible. Our LX 570 was packed with a rear entertainment system, giving the middle row two large screens mounted to the back of the front seats. These screens were hooked up to the Mark Levinson sound system and DVD player. This was great for putting on a movie and keeping the kids entertained, but only for the ones in the middle row – you weren’t able to see the screens from the third row seats.

Speaking of the third row, this LX is a big vehicle and everyone fit just fine, but you’re definitely a little more cramped than you would be in something like one of the big GM SUVs or an Expedition from Ford. The space behind the third row is decent, as we were able to fit some food and a few other items back there – but if carrying much more an even bigger vehicle (Suburban?) would be required.

Looking at the exterior design of the LX, this large SUV exudes luxury and stature. Pulling up to my grandmother’s house we were immediately greeted with questions of price and having family members sticking their heads in to get a peek of the interior.

It also didn’t take long for my uncle to pop the hood and see what kind of beastly engine powered this powerhouse vehicle. That would be a 383-horsepower 5.7 liter V8 with 403 lb.-ft. of torque, matched to an 8-speed automatic transmission. This combo gave you plenty of power to manage the crazy highways of Texas, at the expense of pretty poor fuel economy. The LX is rated at 13-mpg city and 18-mpg highway with a combined rating at 15-mpg. During our round trip we averaged 16.8-mpg. Many people said that people who have the money to buy this type of vehicle don’t really care about the fuel economy, but I’d disagree with that. I think it’s still very important, and when considering you must use premium gas to fill the tank, you really want to get the most out of it.

So getting to the most asked and all-important question, how much? A base LX 570, well equipped, starts at $89,380. Our test vehicle, though, had a sticker price a tad more hefty: $98,000. This price blew the minds of many in my family, who hadn’t spent that much on their homes, but in the grand scheme of things it’s not that bad of a price for a super luxurious, large, and go-anywhere SUV. I really didn’t even get into the capabilities of taking this thing off-road, but it can definitely handle just about anything you want to throw at it. I’ve tested these things for years during our Truck Rodeo events, and they’ll definitely surprise you.

All-in-all, we had a great Thanksgiving and a smooth and easy road trip. Looking at the competition, we’ve driven both the new Cadillac Escalade and refreshed Lincoln Navigator. Both are large, but neither is as packed with luxury or tech as the Lexus. If you’re staying on the road – which most customers probably are – it could be a toss-up. But if you’re at all interested in taking your $90k-plus SUV out on camping trails or through the woods, the LX is definitely the one to take. And perhaps the only one you’ll bring back…

2017 Nissan Pathfinder
The Path to Thanksgiving:
Over the River and Thru The Woods
Fiat’s New Spider – Miata Amore
Event Calendar