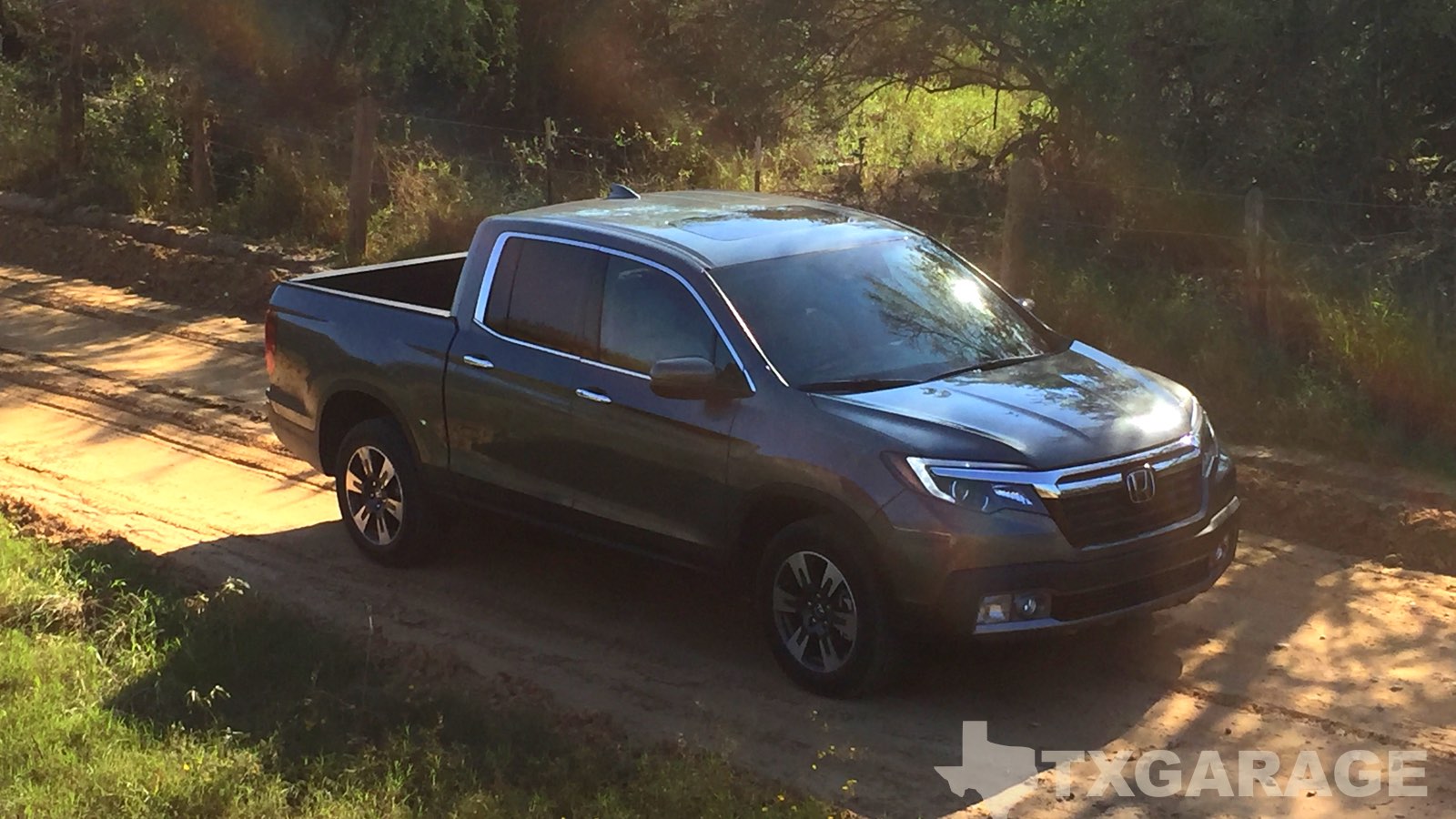 Texans love their trucks. Texas buys more pickup trucks than any other state in the country. It’s the reason why all the big truck manufacturers produce Texas-edition exterior packages for the market. One in five trucks sold in the US are sold in Texas, according to Edmunds. And all of this means Texans know exactly what they want out of a truck and are very vocal about their preference. I’ve overheard debates between Ford and Chevy truck guys that use more facts than a presidential debate (not hard – ed.), and are just as heated.

The 2017 Honda Ridgeline AWD is a completely redesigned truck from its previous generation. It’s the new kid at school trying out for the football team in order to make friends quickly. I’ve driven just about every kind of truck from an antique with a 3-speed column shift to a massive diesel with air brakes, so I was really excited to see where the Ridgeline fell on the truck spectrum. My first thought in the parking lot when it arrived at the office was, “Looks like a CR-V with a bed… an El CR-V.” But I wanted to be fair, so I quickly wiped the slate clean before I got inside.

EXTERIOR: If you put the Honda Ridgeline next to the Honda Pilot and CR-V you can clearly see the similarities between them. It’s mostly in the face, as they share the same features all the way up to the front doors before each of them start to show their individuality. This is nothing new; look at the Chevy Silverado and Tahoe, or Toyota Tundra and Sequoia. Having said that, I do not think the 2017 Honda Ridgeline gives off the rugged masculinity that is commonly associated with owning a truck. You look at truck commercials and always see them doing manly things at a construction zone or kicking up mud in the wilderness as a stern narrator tells you to go buy one. Looking at the Ridgeline I can’t imagine anyone wanting to install a 3-inch lift and taking it off-roading in Moab, Utah.

The Honda Ridgeline may not exhale testosterone from its exhaust pipe, but it is vestal. The Ridgeline comes equipped with a lockable in-bed trunk that can also double as a cooler. LED lights on both sides of the bed are a welcomed feature when you are trying to load up the truck in the middle of the night. The in-bed trunk is deep enough to store a vacuum cleaner, and it’s also where the spare tire is stored. The tailgate is dual action so can be opened two different ways. You can option the Ridgeline with truck bed speakers to make it the ultimate tailgater at sporting events and use the 400-watt AC power inverter to hook up any electronics to keep the party going.

INTERIOR: As I’ve mentioned in the past, I am not a tall man, so it’s common for me to “hop into” most modern pickup trucks that don’t have side steps. And I didn’t have this issue in the 2017 Honda Ridgeline as it sits at a height that is accommodating to most heights. Once inside, the Honda Ridgeline shows you its most attractive feature: space! The Honda Ridgeline shares about 1/3 of its DNA with the Honda Pilot, so the interior feels more like an SUV than a truck. Every friend I gave a ride to told me the same thing, “It feels like I’m in a minivan,” largely due to the spacious interior and high sitting position. There is enough space in the backseat for everything from child seats to golf clubs. The rear seats fold up, leaving you plenty of floor space to store big items inside.

The Ridgeline is meant to compete against other midsize trucks like the Nissan Frontier, Chevrolet Colorado, and the Toyota Tacoma, but it has the interior space of a full-size truck. This particular Ridgeline had the RTL-E trim level which meant it was well equipped. Heated leather seats and steering wheel, tri-zone climate control, Car Play, 8 inch touchscreen display, keyless entry, backup camera, 8 speaker audio system, satellite radio, powered sliding cabin window, moon roof, power seats, and push-button start were just some of the highlights the Ridgeline’s interior – in this trim level – was able to offer.

SPECS: The Ridgeline is powered by a 3.5-liter direct injection V6 producing 280-hp and 262lb-ft; it’s the same engine used in the Honda Pilot. The Ridgeline does have decent power, but consider it weighs 4,500 pounds. It does respond well to a heavy foot, doing 0-60 in under 7 seconds, and thanks to independent rear suspension it can handle its own through the turns. Gas mileage is also good at 18 mpg in the city, 25 mpg on highway – I averaged 21 mpg during my week of nearly 600 miles.

The All-Wheel Drive system in the Ridgeline can be adjusted at the touch of a button between Sand, Snow, Mud, or Normal to adjust for road conditions. Switching out of normal also means that the Ridgeline’s engine rev’s higher and therefore feels a lot quicker, at the expense of burning more fuel. The AWD also increases the Ridgeline’s towing capacity up to 5,000lbs and has a payload of 1,500lbs.

I took the Honda Ridgeline on the dirt roads of the county to see if it could handle getting mud in its wheels. I was surprised how smooth the Ridgeline felt while driving at 75 mph over washboard dirt. All I felt were vibrations under my feet, a sign that the Ridgeline was working hard to keep me comfortable. There was an instant where I felt the suspension travel as we drove over a crest in the road and felt like it wanted to break loose, a moment of concern since the Ridgeline has a big warning sticker advising against sudden maneuvers because it can tip over and roll. Thankfully, the good-handling Ridgeline stayed in control without me having to turn into a rally driver.

The 2017 Honda Ridgeline comes in several different trim levels ranging in price from $30k to $44K. It starts with the RT trim, RTS, RTL-T, RTL-E, and Black Edition, all of which can be optioned with AWD. The model shown here was the second to highest trim level with a sticker price of $42, 270.

FINAL THOUGHTS: The 2017 Honda Ridgeline AWD is a truck that is very comfortable, quick to drive, and offers fullsize space in a midsize package. Its features make it one of the most capable midsize trucks that can do the job of a truck and an SUV. A drawback of the Ridgeline is that you do not have the option of choosing bed sizes or cabin layouts like other trucks. And if opting for just FWD means the towing capacity drops to 3,500lbs.

But the biggest drawback that could hurt the Ridgeline’s sales number is how it looks. I do not think truck buyers will be comfortable switching from their F-Series and Duramax into the Ridgeline, unless they want a smaller truck to get around town in. I can see the Ridgeline becoming popular at school zones because of its ability to drive like a minivan while having the benefits of a truck. The 2017 Honda Ridgeline AWD reminds me of an urban cowboy, the type of person that owns cowboy boots but never gets them dirty because they never leave the city. The Ridgeline is a good pickup truck, but it’s difficult to imagine it anywhere beyond a concrete jungle.