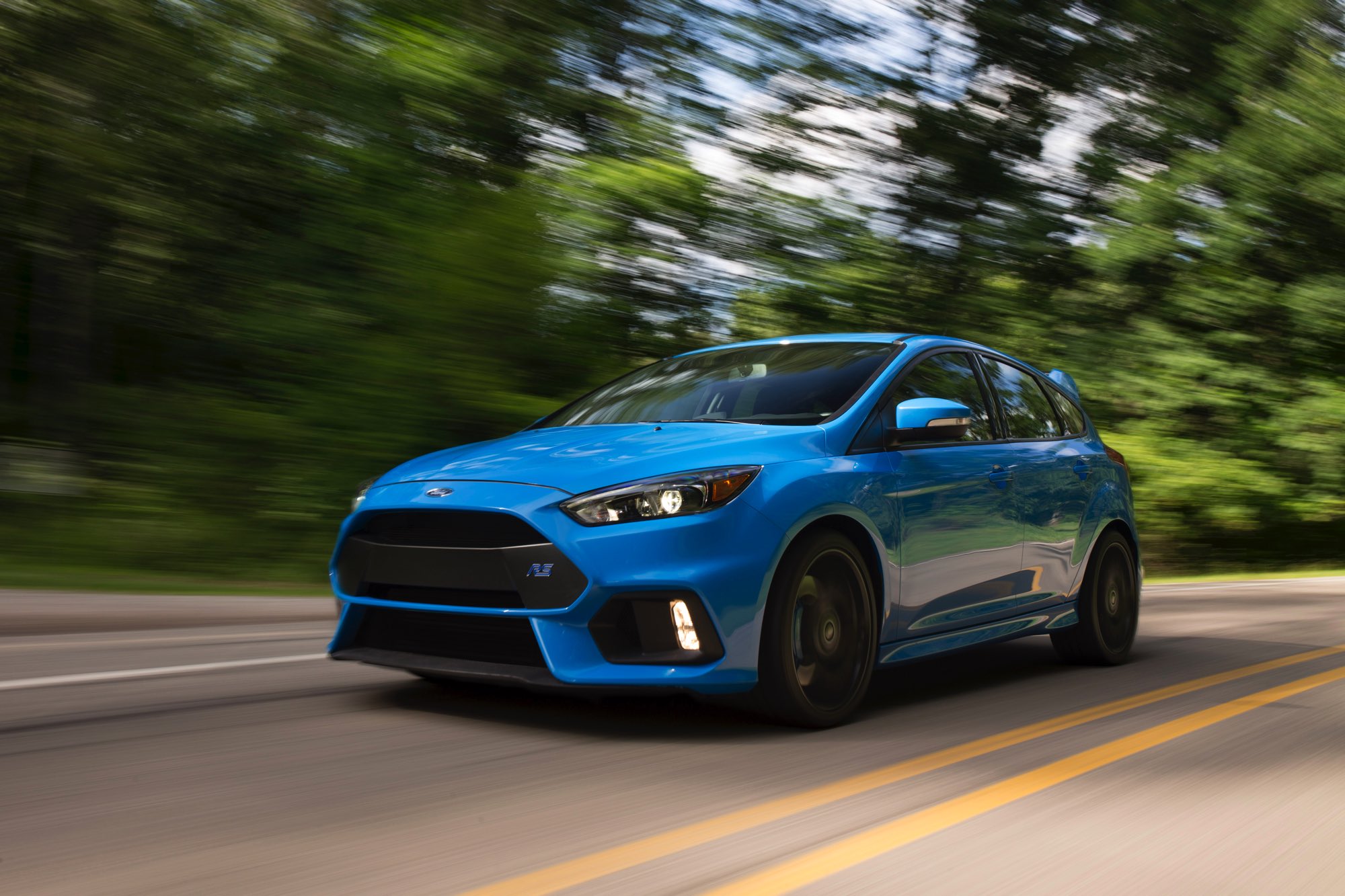 In Maybellene, singer/songwriter Chuck Berry was – rather famously – ‘motivatin’ over the hill…and saw Maybellene in a Coupe deVille’. In the lyric Berry goes on to claim ‘nothin’ will outrun my V8 Ford’, and while that was possibly true 60-some years ago, it ain’t true today. For a clear example of what a young Chuck Berry would drive today, we proudly present Ford’s Focus RS.

The recipe for Ford performance has been the same since a young Henry Ford squeezed what looked like a locomotive powertrain between two frame rails, mounted wheels, a seat and handlebars for his pilot, Barney Oldfield, and set about launching Ford’s own automotive history with his 999. Over succeeding generations it was Ford’s Flathead V8 occupying the space once taken by anemic 4-cylinders, or Shelby’s high-compression take on the 260 and 289 V8s.

More recently it’s been an EcoBoost ‘boost’ to the lineup, combining turbocharging with smaller displacement to improve fuel economy while not reducing performance. Ford’s EcoBoost-equipped pickups are selling like McDonald’s all-day breakfast menu (what took so long?), and permutations of same – the engines, not the hotcakes – are spread widely among Ford’s lineup of cars and crossovers. Its latest iteration has shown up in the humble Focus, boasting 2.3 liters of high-output turbocharged compression connected to a 6-speed manual trans and all-wheel drive. And it’s a combo to drive for…

This, of course, isn’t Ford’s first hot hatch. Variations of same depend a great deal on what we call ‘hot’, but as Mini and – later – Volkswagen did the heavy lifting in shaping the hot hatch segment, Ford was throwing more power at Escorts, Fiestas and, more recently, the Focus. Until the RS, however, these United States never received the truly hot stuff, perhaps because that over-the-top performance typically came with over-the-top pricing. Instead we received the Focus ST, a not-inconsiderable combination of cadence and capability, but sending an immodest amount of power (252 horsepower and 270 lb-ft of torque) only through the front wheels. The RS bumps that power up more than a titch, generating an oh-so-symmetrical 350 hp and 350 lb-ft of torque. And to make that math work on the highways and byways of America (and keep Cadillacs in your rearview mirror, regardless of weather) the guys at the testing center gave the RS a performance-skewed all-wheel drive with (you’ve already guessed it…) Dynamic Torque Vectoring. This, we’re told, can distribute 100 percent of available torque to either rear wheel. And with 350 horsepower, they should probably introduce a dually.

Thankfully, visual ‘enhancements’ to the RS are damn few. The front fascia is more aggressive, and the hatch-mounted rear spoiler seems more dominant than the one offered on the ST, but that seems about it. Of course, the RS sits on a 19-inch forged aluminum wheelset surrounded by Michelin’s Super Sport Pilots. The Michelins are perfect for your track-based fantasies, less perfect for the pock-marked hustle to your local Target. If the F&I guy offers wheel insurance, buy it.

Our test Focus, fitted with the RS2 package, offers leather-trimmed Recaros with an Alcantara-like insert. This seat is absolutely golden on the track, less so if 18 months removed from back surgery. We’d hope to spec something less aggressive for street duty and – if going to the track – keep an easily swapped track-specific Recaro in the hatch. Or, as an alternative, strategically-placed Velcro on the driver’s suit…

Beyond the seat, the dash is generally informative and almost intuitive, the 6-speed manual is – as Motor Trend put it – the ‘type you shift because it’s so enjoyable to row’, and the leather-wrapped wheel sits perfectly in your hands. Despite the seat’s power adjustment, we found the ideal seating position somewhat elusive, but then, we had the RS for but a few days while you – the buyer – could have it for 72 payments!

As you’ll probably already know, there is any number of ways to spend $40K at a dealership. That money will easily buy you BMW’s 228, a well-equipped Audi A3 or – for-Milano-sake! – Alfa’s new Giulia. But nowhere will you be able to buy 350 honest-to-Henry horses for anywhere close to that, other than a Ford store and the Focus RS.

With Chuck Berry’s passing, we can only imagine what he would do when seeing a Cadillac doing ‘bout ninety-five. But we’ll guess he’d grab today’s Focus RS, as his old V8 is just so midcentury. Hard rock. And no roll.