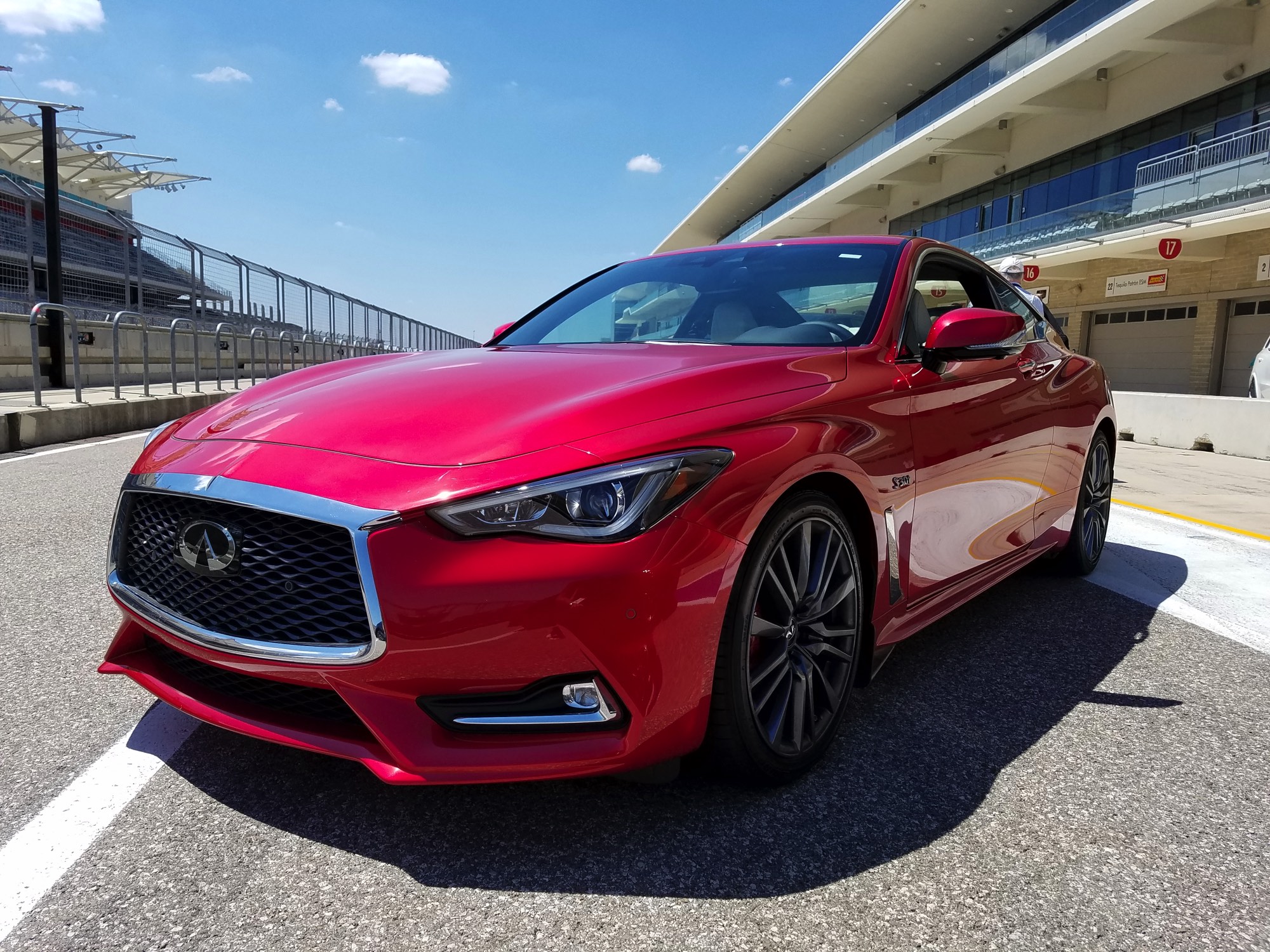 Red on a car is either loved or hated, but never ignored. Among the red cars featured at the 2017 Texas Auto Roundup, the 2017 Infiniti Q60 Red Sport 400 outshined them all. These red cars included a Nissan GTR, Mercedes AMG GT-S, Fiat 124 Spider Abarth and an Octane Red Charger Hellcat. Yet the Q6 Red Sport 400 kept me looking back whenever I walked passed it. One of the reps from Infiniti mentioned that what helps the saturated red paint pop is a base coat of copper underneath. The one downside to this color is that giving it justice through digital photography can be challenging. It always looks better in person.

First Impressions: The Red Sport is the top-of-the-line trim level for the Infiniti Q60. That means the Red Sport carries a 400 horsepower twin-turbo 3.0 V6 to get up and go, bolted to an electronically controlled 7-speed automatic transmission with paddle shifters. Rear-wheel- drive comes standard on the Q60, although all-wheel-drive is available. The interior of the Q60 is a nice place to be; the white leather interior is cool and inviting, and you get two infotainment screens on the dash’s center console to navigate. The silver-optic fiber interior trim matched beautifully with the white leather interior. I felt like I was inside a designer watch, that detailed, quality feel.

Driving modes can be changed by flicking a switch near the gear shift – Infiniti gives you six modes to choose from:

Since I was going to be on a race track I tested the Q60 in Sport and Sport +, modes while using paddle shifters. As with most modern paddle shifters, I did not have to worry about downshifting because the Q60 Red Sport came equipped with Downshift Rev Matching (DRM). Personal mode allows you to tailor your specific driving needs. According to Infiniti, there are a total of 336 combinations for driver settings on the Q60 Red Sport 400.

On the track the Q60 was comfortable at speed. Given that I had been throwing cars around corners for a few hours prior to testing the Q60, my stomach was feeling a little annoyed by G-force. However, in the Q60 I found that I could experience the fun of driving on a track without feeling like my stomach was playing bumper cars. The Q60 Red Sport hits 60 mph in 4.4 seconds while making a great exhaust note. Acceleration is smooth and feels effortless as it glides up to speed. That’s thanks to Infiniti’s driving technology, standard with the Red Sport 400 package.

Rack-and-pinion electronic power steering, matched with Active Trace Control, means the Q60 adjusts its handling performance to deliver the smoothest ride at any speed. It does this by adjusting the torque and braking to ensure it corners flat through the turns. Active Trace Control can be switched off, or gives you the option being at a low or high setting.

Dynamic Digital Suspension in both front and rear electronically adjusts shocks and dampers in real time to control body roll. That means you don’t feel the harshness of your body shifting side to side as the car’s weight is being transferred during hard steering. That alone makes the 2017 Infiniti Q60 Red Sport a classic GT coupe, a luxury car that can excite you when the moment is right, but will otherwise take you from A to B in style and comfort.

I took the Infiniti Q60 out on the track twice. The second time I had a rep from Infiniti along for the ride. I was able to drive around a racetrack in the Q60 without causing the rep to have motion sickness while having a conversation. A good example of how stable the Q60 can be even in an environment where comfort takes a backseat to speed.

Specs and Trim levels of the 2017 Infiniti Q60: While the Red Sport 400 starts at $51k there are different varieties of the Q60. At the other end of the spectrum, you have the Infiniti Q60 2.0t, which starts at $38K. This model comes with a 208 horsepower 2.0 liter, turbocharged four cylinder. You can also opt for a 300 horsepower version of the Red Sport’s 3.0 twin turbo V6 for the mid-range 3.0t models. No matter which engine you choose, AWD is available in every trim level. But, unless you live in an area that snows during winter (or spring in some cases), I would stick with rear wheel drive on the Q60, because it is more fun and keeps the curb weight down.

Final Thoughts on the 2017 Q60 Red Sport 400: Everyone I asked had a love-it-or- leave-it opinion on the Q60’s front end appearance. However, we all agreed that the rest of the car looks outstanding. It’s handsome, elegant, but without feeling like you’re showing off, right in the pocket between modesty and ego. You won’t feel like people will send negative waves of envy if you drive it in public. And it feels confident – and slightly competitive – when you park it next to a Mercedes or BMW.

Infiniti has always had a middle child complex in the automotive world. They haven’t made an impact to separate themselves from their parent company like Lexus or Acura has. In fact, I’ve often corrected friends and family who mistake a Lexus for an Infiniti, and vice versa. The Q60, however, is a good example that Infiniti has what it takes to build a performance car that leaves a lasting impression. The 2017 Q60 Red Sport 400 is definitely a car you’ll look twice at when you see it in a parking garage.