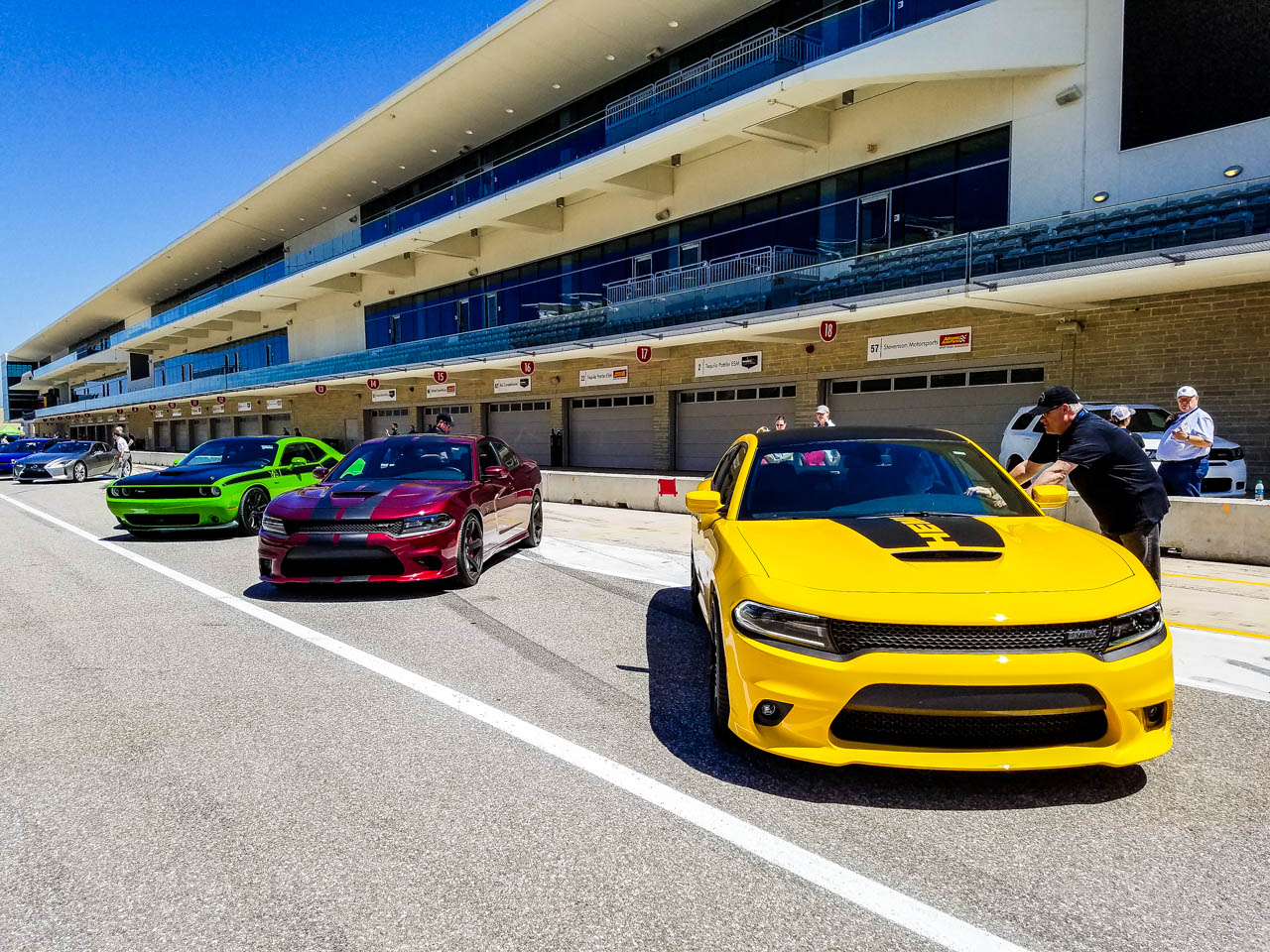 When I first saw Dodge’s new ad for the Brotherhood of Muscle (with Vin Diesel), I had a negative reaction. First impressions made it look like Mopar would now be the frat boy, nationally agreed-upon fleet machine. Which annoyed me, but only because I’m a true admirer of Mopars. It was the first time in my life that I felt like a hipster, that whole I liked them before they were cool, moment. It’s no secret that FCA is putting a higher octane spin on an old formula: Make them loud, make them brightly colored, keep them under six figures and prepare for back orders. And that – of course – is a huge improvement from cartoon horns and 90-day warranties into some truly impressive cars that can do more than just burnouts.

At this year’s 2017 Texas Auto Roundup, hosted by the Texas Auto Writers Association, I had a golden ticket opportunity to test out FCA’s finest, back to back! And do it on a Formula One track! The opp(s) included, but were not limited to:

I’m 24, can’t legally rent a car from a company I used to work for, but here I am jumping in and out of these cars like Speed Racer. The journalist in me wanted to put aside all Vanishing Point, Christine, Bullitt fantasies and remain unbiased. However, the car guy in me wanted to know if all the trash talk on the forums were real. Are they too heavy? All flash and noise used to make tire smoke? 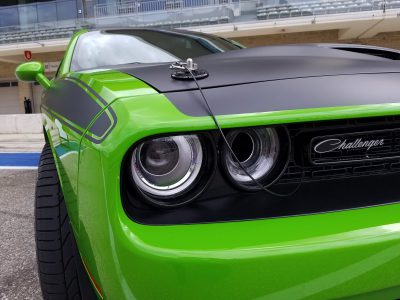 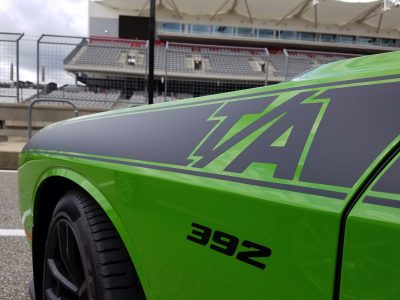 Every time I was around this car people would say, “It fits you.” And that immediately went straight to my already-inflated ego, being told that I was a match with a big green muscle car boasting matte black “392” decals, wheels, and hood pins. The Challenger dwarfed the other performance coupes parked next to it.

The sun was still rising when I lined up the Challenger T/A to exit pit lane onto the Circuit of the Americas race track. Waiting for the cars ahead to clear gave me time to check the dashboard, making sure the driver settings were okay. Everything on sport mode? Good. Into manual, so I could use the paddle shifters. Good. Wait for the signal…okay, punch it!

I was bracing for the jump, that moment where I would just hear the rear tires melting away as I inched forward off the line. You know what the critics say about big, V8, rear wheel drive cars. What I didn’t expect was a volcanic eruption taking off the line and throwing my head back into the plush seats. Thank god for redline censors, because I was so intoxicated by the whole event that I forgot I needed to change into second gear.

There’s no denying the fact that the Challenger is a big car, and I could feel its weight being pushed around through the turns. However, if you aren’t a caveman you’ll see the modern technology infused in this Hemi throwback. The Challenger T/A feels wide but delivers the power when you need it without hesitation. And that means you can use the 392 Hemi to power through corners like a Trans-Am racer. All of this is happening while listening to it growl in anger when you downshift.

Stats & Features: You won’t be able to order one of these until October, but until then here’s what you need to know.

The T/A comes in 3 trim levels. The standard Challenger T/A provides a 5.7 liter, 375 horsepower Hemi V8, with a standard 6-speed manual. A standard manual – in this segment – is a true throwback; buyers can also option an 8-speed automatic with paddle shifters. The T/A package includes stain black trim, a Hellcat-inspired hood scoop, and ram-air through the headlamp just like its big brother Hellcat. What makes the T/A stand out from the rest of its brothers is Dodge’s Super Track Pack, which lowers the car 0.5 inches, supplies upgraded shocks, high-performance brake lining, a 3-mode stability control (with off switch), aluminum wheels, and sticky Goodyear Eagle F1 tires. The cherry on top is a performance exhaust, exclusively for the T/A, that makes it sound like its 1971 at Laguna Seca when the rev needle goes past 5,000 RPM.

Next is the T/A Plus which upgrades the cloth seats for leather-wrapped, heated and ventilated buckets. It also provides better audio and infotainment systems, and a leather-wrapped steering wheel. The top of the line, as shown, is the T/A 392. Buyers who go for this will be rewarded with a 6.4 liter, 485 horsepower 392 HEMI V8! To cope with the added power all T/A 392’s come with a set of Pirelli three-season performance tires on slightly wider wheels, and big pizza pan-sized Brembo brakes. All of which makes for a stellar way to intimidate every MX5 at a track day. 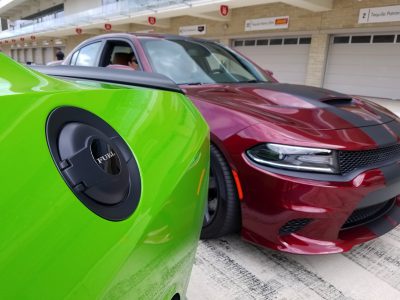 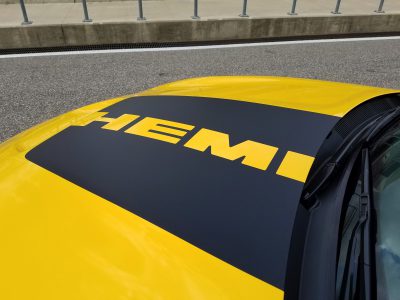 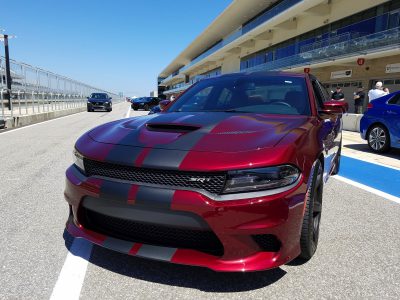 Choosing a Mopar is starting to feel like going to an ice cream store. So many colorful options and each one makes a great noise. The Daytona is basically a visual trim package. You get the cool throwback “Daytona” decals paying tribute to the 200mph winged warriors of 1970, and upgraded Daytona embroidered leather seats. And then there’s a 485 horsepower Hemi V8 with 8-speeds of baritone to play with.

The Hellcat? Well if you haven’t heard by now then you either don’t care or you’re too young to read this, so I’ll save you the 707 horsepower speech, skipping to how they felt on the track.

They felt like pro wrestlers. They are the only things that make figurative sense when trying to compare these vehicles to something non-automotive you might (or might not…) know. The Mopar products are so big, yet move with such grace. Once you get a feel for how the Charger SRT accelerates you’ll find how responsive the steering is for its size and weight. I had no trouble controlling these cars under hard braking going into turns at COTA. I felt comfortable taking sharp turns at highway speeds because I knew I was not going to get body roll. The Hellcat and Daytona are poised in keeping their paws on the track. Of course, if you want to cut loose just put your foot in it and brace for the G-force. 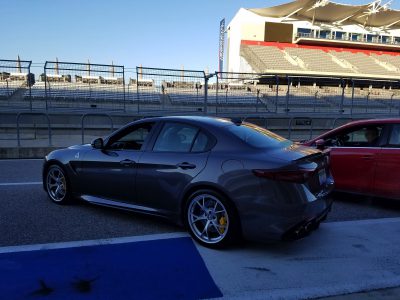 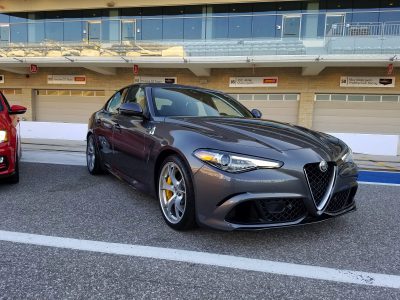 This car actually won Texas Car of the Year at the 2017 Auto Roundup. Really. Which means that most, if not all, the journalists giggled the first time they accelerated from 0-60 in the 2017 Alfa Romeo Giulia Quadrifoglio. The steering in the Alfa is feather light, with the precision of a surgeon’s hand. The bi-turbo V6 jump scares you off the line, just as brutal and exciting as its American cousins, and just as loud. With a 0-60 time of 3.8 seconds and 505-horsepower, it’s not surprising this thing gets compared to a BMW M3. Does Milan have pro wrestling?

To Sum it All Up: The best way to summarize just how cool these cars are, beyond facts and figures, was something I noticed at the event. Every time any of these cars launched off the line the whole place stopped for a moment to listen, no needed smiles or facial expressions required. It was just a split moment of distraction followed by admiration. That is the level of cool with which these machines speak.