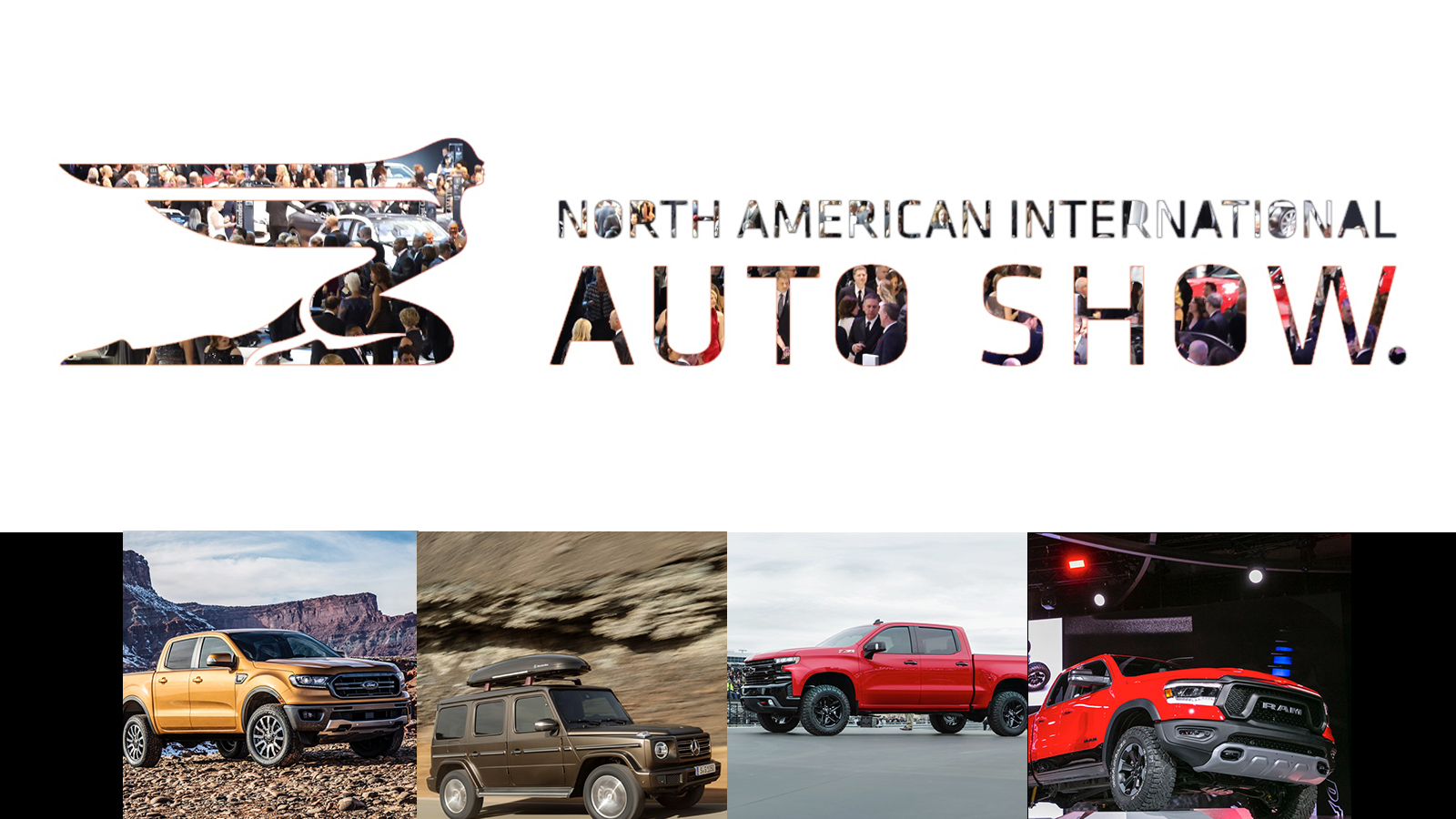 Last week thousands of journalists, bloggers, and vloggers made their annual pilgrimage to Motor City (you know, Detroit) for the 2018 North American International Auto Show (NAIAS). It remains a chance – although not the only chance – for major auto manufacturers to debut their latest products in a grand spectacle.

Given that Texas remains the Truck Capital of the World (take that, Oklahoma!) we’ve constructed a highlight reel, a catalog of all the important truck news that debuted at the NAIAS, saving you the trouble of searching through various sites to get to the heart of the matter. Who, after all, has the time for that?

2019 CHEVROLET SILVERADO – The 2019 Silverado debuted its new shape, redesigned with all-new features to improve the truck-owner lifestyle. Take the automated tailgate that can be controlled by the key fob, and storage boxes in the bed. This new Silverado is longer, yet has lost 450 pounds (like dropping Sean Spicer AND Sarah Huckabee Sanders) from the previous generation. The bed, notably, is still made out of steel, and is wider.

Under its hood, the 2019 Silverado will give buyers six different engine and transmission combinations. Its light duty Duramax diesel comes as a 3.0-liter inline-six and a 10-speed automatic. The V8 will still be around, and offers a new fuel management system capable of shutting down cylinders, depending on use. It’s similar to what is offered on GM trucks currently, but this new system is more advanced, capable of letting these engines run on but one cylinder to improve fuel economy. (The next step to optimizing fuel efficiency: simply leave it in ‘Park’. – ed.) 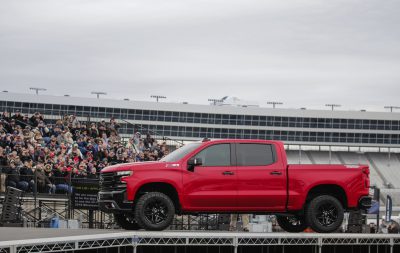 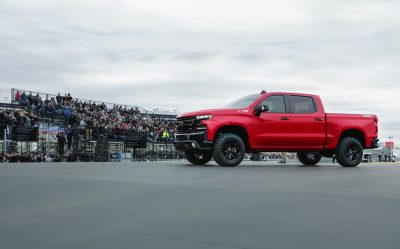 2019 FORD RANGER – Ford announced an entire line up, from muscle cars, electric vehicles, trucks, and CUVs. The biggest news, however, was the return of Ford’s midsize Ranger, sporting a new body/chassis and a 2019 model year. What is essentially the same Ranger that the rest of the world has been driving since 2011 is finally coming to the US. The midsize pickup will be powered by a turbocharged 2.3 liter EcoBoost four, which should supply both competitive urge and reasonable economy. Ford didn’t announce performance figures, but plans on being class leading, and that performance will be sent to the ground via an available 10-speed automatic.

And way out of left field, Ford announced a performance version of the Ford Edge. The Edge ST is set to have a 2.7 liter V6 EcoBoost, putting out 335 horsepower! It will feature paddle shifters, dual exhaust, different driver modes, and optional upgraded brakes. Even the standard 2.0-liter engine will have 250 horsepower, which is more than enough power to get the kids to school on time. 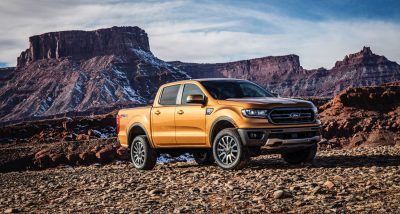 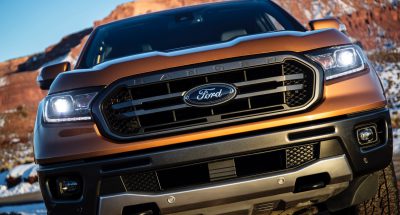 2019 MERCEDES-BENZ G550 – At first glance, the 2019 model looks exactly like the outgoing model, and more than a little similar to G-Wagens from the 1970’s. The 2019 G550 is actually 2.1 inches longer and 4.8 inches wider. All major improvements were done inside. Interior materials have been updated and upgraded, and the interior cabin is more spacious, allowing headroom for people over 5’ 9’’. The steering wheel will offer touchscreen controls, and a 12.3-inch command screen is in the dash.

Off-road capabilities have also been slightly improved. Ground clearance has been increased 0.2 inches, and maximum fording depth is up by 3.6 inches. The only engine referenced at the NAIAS was the 4.0 liter twin-turbo V8 with 416 horsepower and 450 Ib-ft of torque. 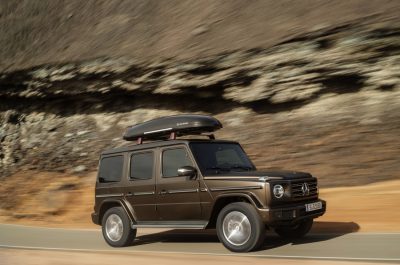 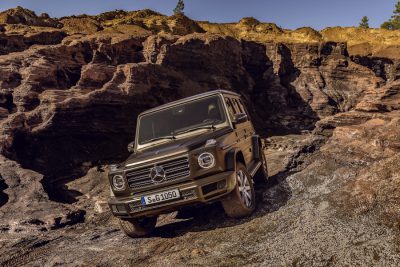 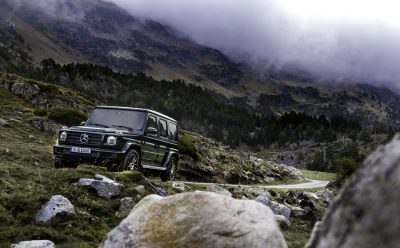 2019 RAM 1500 – The redesigned Ram is wearing a new face. FCA says the 2019 Ram 1500 will be lighter, stronger, and hybrid(?). Notably, the new Ram has dropped 225 pounds while offering a towing capacity of over 12,000 pounds. And as you’d guess given the competitive environment, the Ram interior has been thoroughly upgraded, and now offers a touchscreen over 12 inches long. (It’s so big you’ll think you’re sitting in a Tesla.)

The Ram team is intending to be the most comprehensively-equipped light-duty pickup, offering the biggest touchscreen, a 900-watt audio system with 19 speakers and a new 360-degree backup camera. Buyers will get two engines options: the 3.6-liter Pentastar V6 and the trusty 5.7-liter Hemi. The main difference will be that both engines will have 48-volt mild-hybrid technology, and stop/start function, to improve fuel economy. The new Ram will be available in 12 different exterior colors and 15 new wheel designs. Take a cot (or sleep in the bed), and plan to spend an entire week in the showroom. 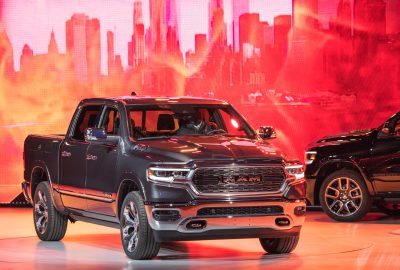 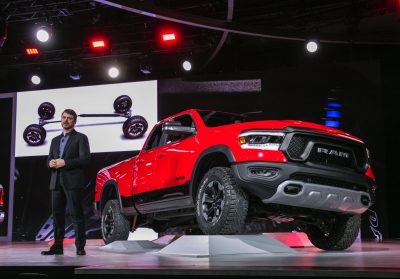 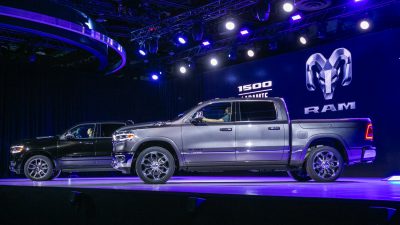