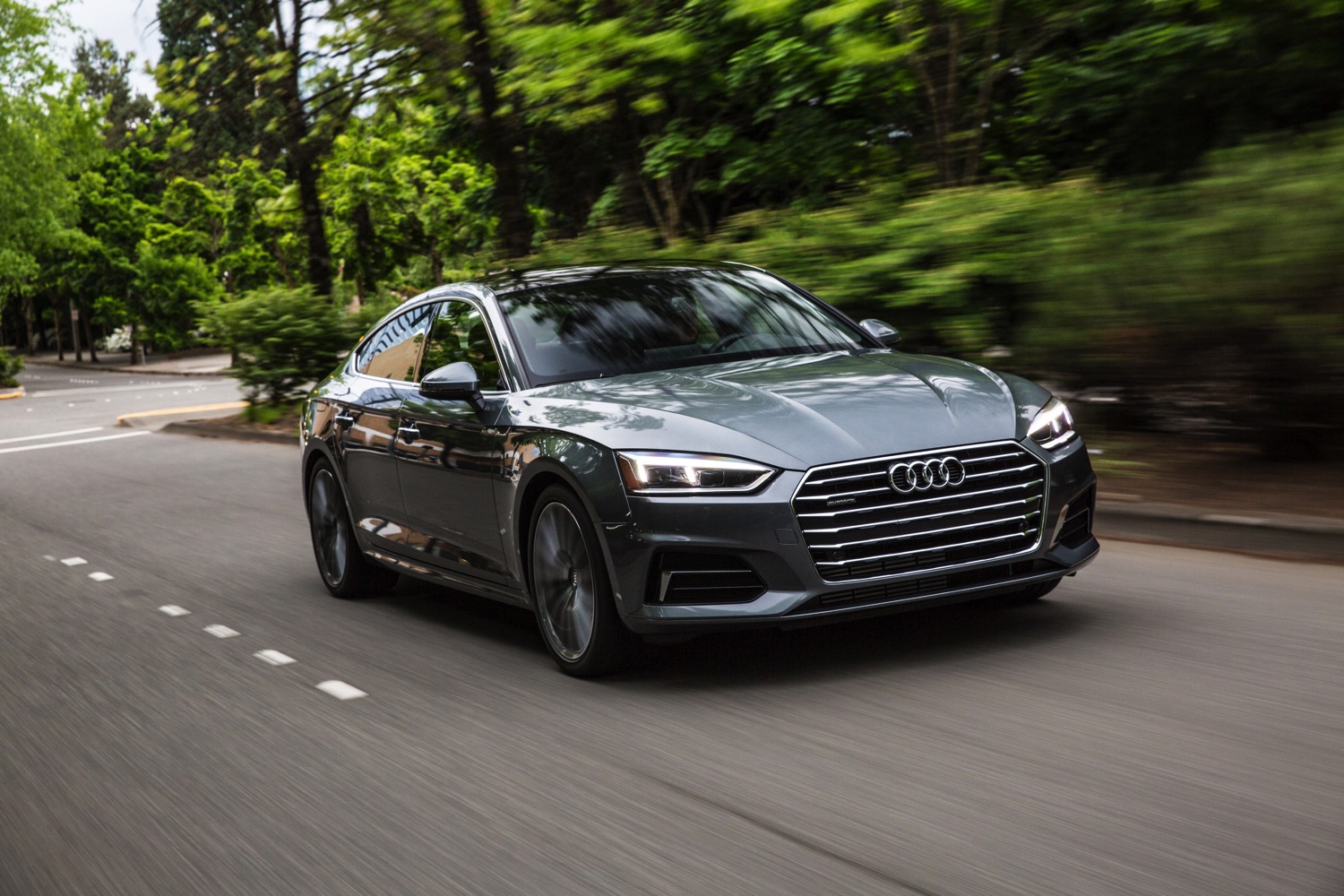 If the pundits are to be believed, we’re witnessing the death spiral of the family sedan. (These – of course – are different from those pundits predicting a Hillary win…) And as common wisdom will repeatedly tell you, Americans have never embraced the hatchback, except – perhaps – on note lots. But these premium examples of collected wisdom haven’t curtailed Audi from concocting a 4-door, hatchback derivative of its A5 coupe and calling it ‘Sportback’. The Brits might call it cheeky, while we – if paid by the syllable – would call it ‘audacious’.

Audi, of course, has been here before. Their upmarket A7 combines most of the well-received (albeit staid) architecture of the A6, adds a slightly lower greenhouse in combination with a fastback/hatchback rear profile, and drives a knife through the heart of the midsize luxury category, historically dominated (you knew this) by the 5 Series and E-Class. The A7 is splendid, but can also be spec’d as splendidly expensive. Many still trying to recover economically from 2008 (and yeah, I know – it’s 2018) might prefer something more modest, but still capable and captivating. For that, Audi supplies the A5 Sportback. 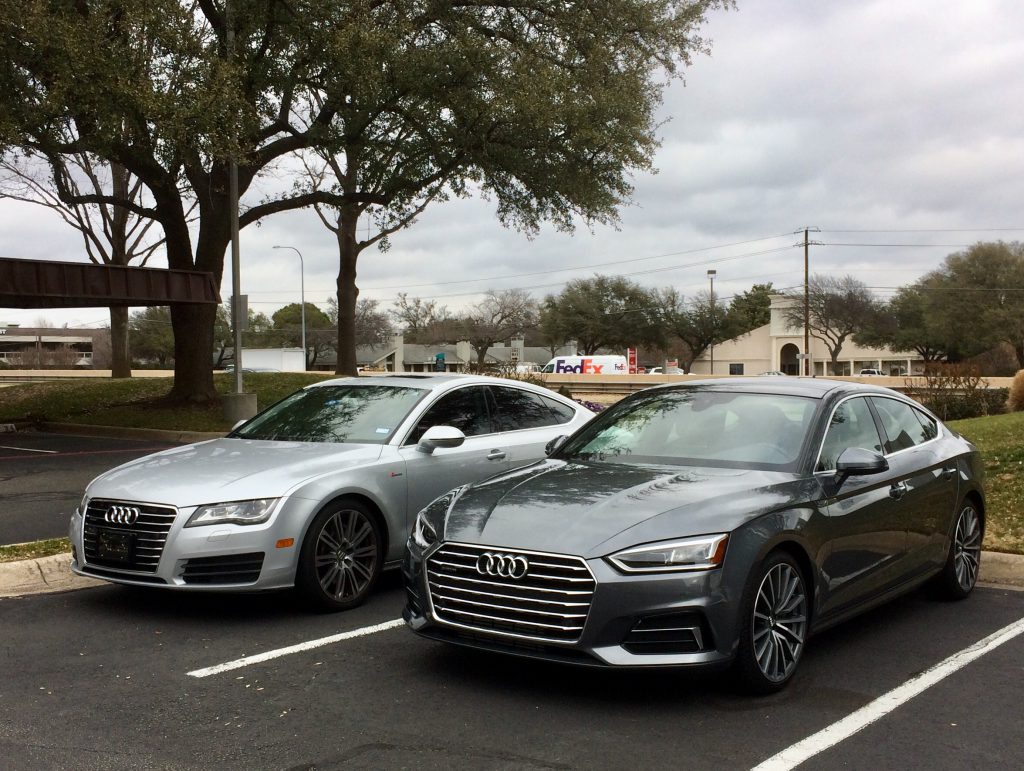 Audi A7 (left) and A5 Sportback

With a platform closely related to Audi’s popular A4 and wagon-ish A4 allroad, you do begin to wonder if Audi’s product team isn’t (perhaps) slicing the product pie a bit too narrowly. But in our initial walkaround of this ‘sporty’ Sportback we’ll admit that the differentiators are abundant. With the A5’s new sheetmetal more expressive, and the 5th door adding some utility to the basic shape’s overt sportiness, the impression is distinctly European, and supplies some visual distance from what BMW or Benz are proffering. The closest comparison amongst the other Germans is BMW’s 4 Series Gran Coupe, an attractive mashup of 3 Series platform, lowered roof and folding rear seat.

The Sportback’s sheetmetal sits on what has become a generic Audi menu: a turbocharged 2.0 liter four is connected to all four wheels – quattro, you know – via a 7-speed, dual-clutch automatic transmission. With 252 horsepower and 273 lb-ft of torque (from 1,600 to 4,500 rpm), the A5 Sportback is anything but flat-footed. For those, however, absolutely insisting on more urge, there’s the S5. It provides 3.0 liters of V6 fun with 102 more hp and just under one hundred more lb-ft of torque. Again, based on our own modest circumstance we’re more than happy with the urge – 0-60 in under six seconds and a top speed of 130 – supplied by the ‘cooking’ A5, but there’s an audience preferring ‘more’ to ‘less’; the S5 supplies it. And for those caring about fuel efficiency, the 2.0 turbo will reliably deliver mid-20s in a combination of freeway and stop-and-go driving.

While you’re enjoying the A5’s responsiveness, know you can dial it up – or back – as necessary. Audi provides three driving modes – Comfort, Dynamic and Auto. The car was delivered by the press fleet team in ‘Comfort’; of course, if we wanted comfort we’d order a Malibu. The ‘Dynamic’ was certainly dynamic, but perhaps too much so for day-in/day-out practicality. The sweet spot – you’ve already guessed it, right? – was ‘Auto’, responding to our very real need to have fun, but without setting our butt(s) on fire. For its 3700 pounds the A5 Sportback is genuinely responsive in feel, and genuinely connected in its on-road communication.

Inside, know the Sportback team does a nice job in its layout, we still prefer a dashboard without widescreen TV, seats are perfect for your sport-oriented backside, and plastics – I’m calling out the glovebox and turn signal stalk here – aren’t quite up to what we typically receive from Audi. Also, if one of your teenagers is approaching six feet they’ll probably want to buckle up in front; if so, don’t let them drive.

Behind the wheel, the Sportback is almost anything and everything you might want it to be. If you want to head down I-35 in absolute comfort it allows that, but if you want to subsequently make an aggressive detour in the hills outside of Austin, doing ‘Dynamic’ provides that entertaining alternative. With the rear seats up you can easily accommodate another couple, while folded you can accommodate your gravel bike. And it won’t, notably, tow your Airstream, but for that you have the Suburban. Right?

Our test Sportback stickered at just over $52K; on Audi’s U.S. website we built out a Premium Plus trim level a few grand below that. Regardless of what you spend or compare it against, if budgeting around fifty large the A5 – in any of its three guises – deserves your attention.