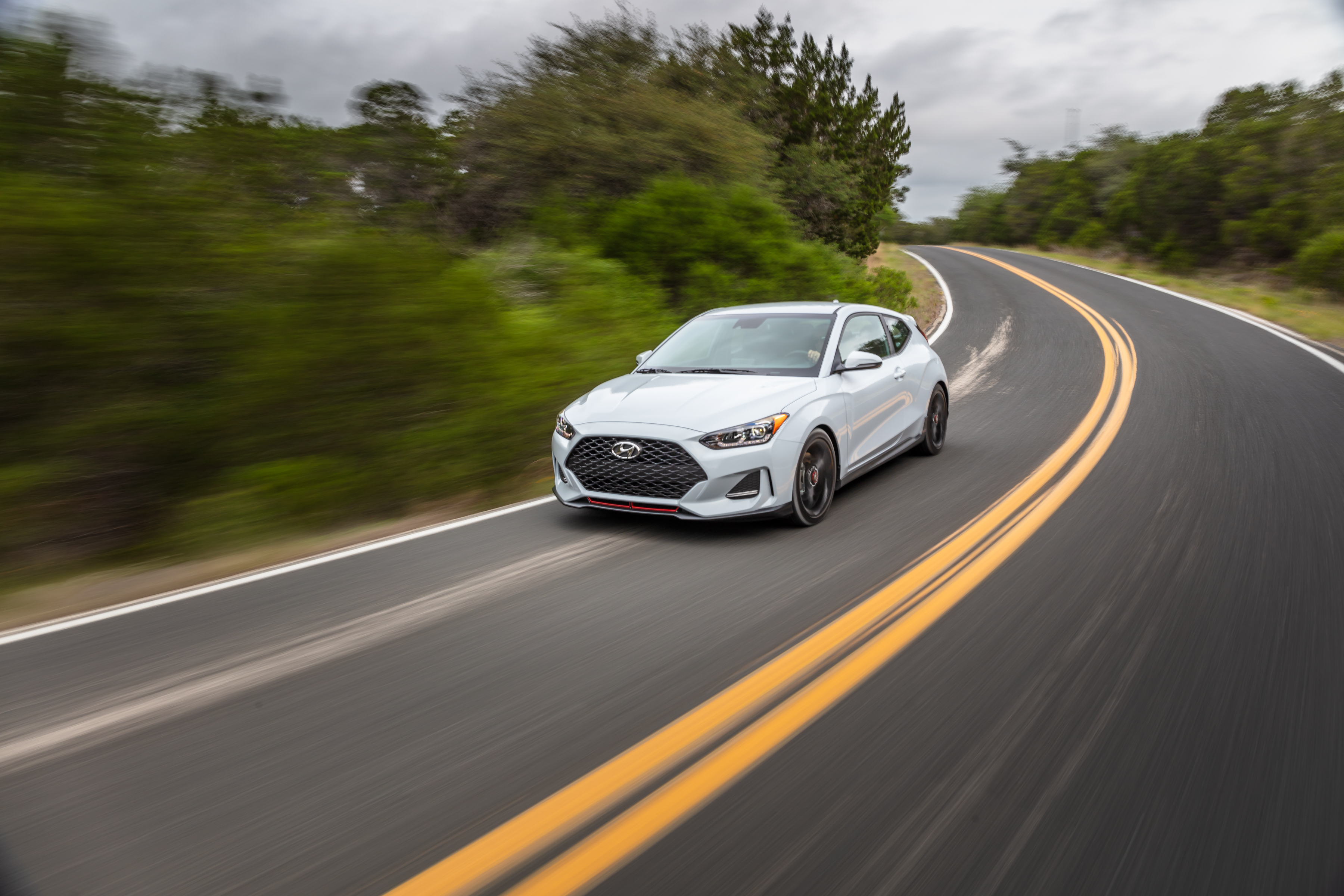 Volkswagen’s Scirocco hasn’t been a part of VW’s U.S. lineup in years. But back in the day I was a big fan, both as an owner in the early ‘80s and later, while selling its successor – the VR6-powered Corrado – in the early ‘90s. Aggressive, 2+2 bodywork on a nimble platform was a winning formula 30-some years ago, and in this observer’s view it remains a winning formula today. If you don’t believe me, I’d like to offer Hyundai’s redesigned Veloster R-Spec as Exhibit 1.

The Veloster (from the Latin, meaning ‘fast ster’) is Hyundai’s quirky, innovative (pick one – or both) 4-place coupe with – now get this – three doors and a hatch. Walk up from the curb and you can barely recognize the rear seat access, but it’s there. And if, like me, you have a 5-year old grandson in need of that access, it’s golden. But from the driver’s side there’s but one door, with access to the rear via the front seat’s folding-forward mechanism. This, of course, is less convenient, but not that clumsy. And once seated – as a 5’7” adult behind, well, me – I’ve plenty of headroom and reasonable legroom. If you’re six feet or over think of this as a 2+1 and not, realistically, a 2+2 – but in the segment of 4-seat coupes it could be and has been (think Scirocco/Corrado) worse.

Outside looking in, this is a more mature take on the original, spunky/quirky Veloster recipe. The sheetmetal is more organic, and arguably more ‘Euro’ and less ‘Asian’. There a titch of M-B in the accents above the wheelwells, and to the design team’s credit, the R-Spec’s 18-inch wheels – with 225/40 Michelin Pilot Sports – do a nice job of filling the wheelwells, giving the R-Spec a planted look.

And if offers a planted feel. The Veloster’s suspension is all-independent, with MacPherson struts up front and a multi-link – with twin-tube gas-filled shocks – arrangement in the rear. Disc brakes are 12-inches (ventilated) up front, and 10.3-inches in the rear. The motor driven power steering (yup, MDPS) is credibly direct, and while providing feedback deletes the feedback you don’t want. And despite the 1.6 turbo’s prodigious power – 201 hp and 195 lb-ft or torque – there was little or no evidence of torque steer under any throttle applications. And for those keeping their budget to under $20K, there’s a 2.0 liter, normally aspirated four. It won’t inspire, but neither will it perspire – or expire.

In short, the R-Spec Veloster is an absolute ball to drive. Behind the wheel you’re seated in a smallish, cloth-covered bucket, with a clear view of speedo and tach. The R-Spec comes only as a 6-speed manual, while other turbo trims are available with both the manual and a 7-speed dual clutch automatic. With the pedal down there’s little recognizable turbo lag, and the engine happily spins its way to redline. But there’s nothing dramatic here. Instead, it goes about its business with a refinement that refutes the Veloster’s econobox roots. Car and Driver magazine suggests a 0-60 of just over six seconds, and from a subjective standpoint we wouldn’t argue.

We would, however, take issue with interior plastics. This isn’t the stuff that adorned – if that’s the word – Hyundai’s Excel in the mid-‘80s, but then, this stuff doesn’t excel. We’re not expecting an Audi TT here for the Veloster’s $24K price point, but we’d hope the visuals would come closer to ‘TT’ than mid-‘90s Korean. Others weren’t so critical, but between the dash and door panels there’s little to love – and I’d settle for a ‘like’.

I’d also like to see a D-pillar – the large expanse between the rear side windows and hatch – less restrictive. Sure, you have the rear camera, but the blindspot is significant, and with a platform that’s perfect for the cut-and-thrust, one wishes you could see what you’re cutting and thrusting.

But the nits are muted when you consider the entertainment in the Veloster package, and the practicality that comes standard with all of that entertainment. This can be an autocross terror on a Saturday morning, and the family hauler on Monday morning. You’d be well served by a larger crossover if you’re a 2-car family (Tucson, Santa Fe?), but if you’re intown and going it alone, the Veloster is a rational choice…for your irrational motives.