Orcas Island, WA – If you read, you’ve read it everywhere: the family 4-door is dead. Despite credible sedans offered by almost everyone in today’s showrooms, there’s no argument with the present reality – sedans and, to a lesser degree, hatches require incentives to sell, while their SUV and crossover brethren do nothing but generate profit. With that, Fiat Chrysler and Ford are winding down their sedan production, while virtually everyone is revving up their SUV lineups. Volkswagen, of course, isn’t immune to market whimsy, and after struggling – in relative terms – with its 1st-gen Tiguan against CR-Vs, RAV4s and Foresters, VW has introduced a bigger and bolder version of the same nameplate. And get this: Tiguan aspires to be King of the Concrete Jungle!

This, of course, is but Volkswagen’s latest stab at the SUV universe. Beginning with VW’s Thing 40-some years ago, Volkswagen has made repeated attempts at the all-activity market. The company’s Touareg was arguably too much too soon, while the 1st-gen Tiguan was – again, arguably – too little, too late. The newest Tiguan takes a Mama Bear approach, offering far more utility than the earlier Tiguan, while eschewing the Moab-specific attributes of the much more expensive Touareg. In looking for the sweetspot, Volkswagen’s product team might have found it.

On the outside looking in, the new Tiguan receives an overdose of German generic, offering the same inoffensive visual demeanor as the Passat and Jetta sedans, and – to a lesser/smaller degree – the equally all-new Atlas. While not crazy about its slab-sided architecture, I was wildly pleased with its greenhouse – this is a 2018 vehicle without any of the stylistic flourishes forcing you to order a blind spot monitor. The Tiguan shape and execution is almost – but not quite – anachronistic. Its slab sides, generous greenhouse and relatively short overhangs make you think Jeep, if Jeep’s design team hadn’t taken the silly pill – or an opioid – when designing the recent Renegade. And for us bigger Americans, the Tiguan wheelbase is longer, with that additional length adding to – we’ll guess – the size of the Tiguan’s rear door. 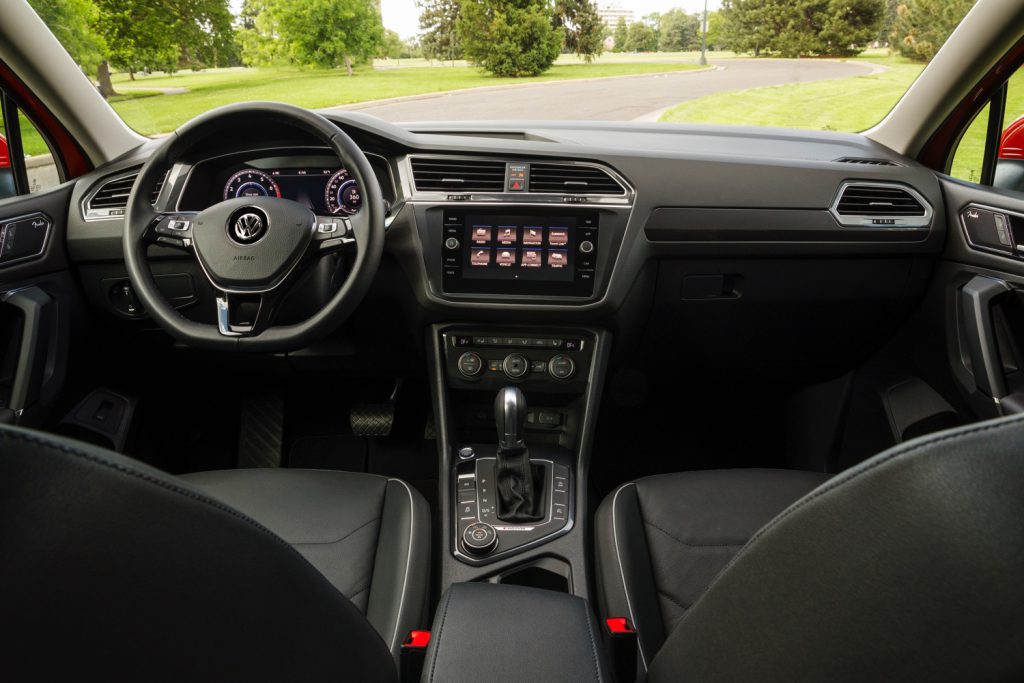 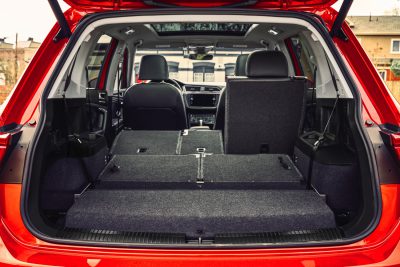 Inside, our test Tiguan was fitted with ‘Golden Oak with Black’ leatherette, and while not a visual knockout, it was everything you’d hope for in a $30K crossover. (My folks once owned a Honda CR-V with Honda’s cloth interior done in a lightish gray. We’ll never do light gray cloth again.) The front seats can accommodate generously proportioned Americans – as if there’s another kind – and the rear seat can comfortably swallow three. If you have more than five, take comfort (some comfort) in an available third row, standard on various trim levels and a $500 option on our test SE – which did not have it. While the sizing of the third row is decidedly child-like, and will eliminate almost all luggage space behind it, it would have come in handy on our trip in Washington state. You pay your money and take your choice; we’d pay the $500.

Under the hood Volkswagen gives you but one choice, but it’s a good choice. VW’s evergreen 2.0 liter turbocharged four delivers 184 horsepower in this crossover application, along with 221 lb-ft of torque. Driving all four wheels through an 8-speed auto, and having to move some 3,900 pounds, we weren’t amazed by how the Tiguan goes about its highway and byway business, but neither were we disappointed. A hybrid assist might be nice, but then, it would also be more expensive.

We’d also hope for an optional offroad spec, with a tad more ground clearance combined with an aggressive tire package. Apparently something similar is offered in Europe; here we get only the package’s front bumper! To its credit, the Tiguan launched with a wide selection of activity-oriented accessories, perfect for that Ritchey bike or Hobie kayak.