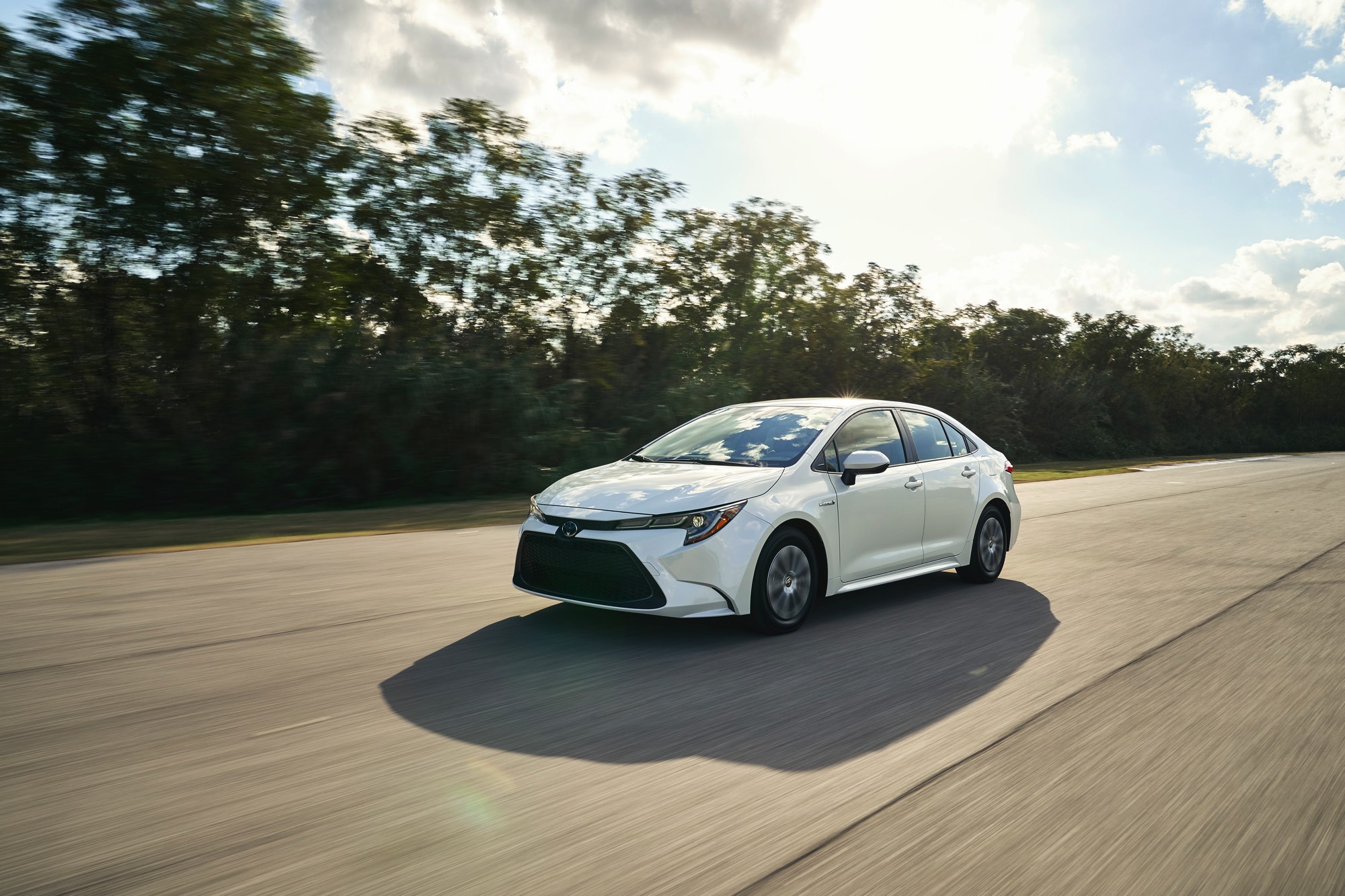 Most reviews, including those written and posted by txGarage, begin with the loan of a press car. This one, a closer look at Toyota’s 2020 Corolla Hybrid, begins – however – with a car rental. My wife and I were in Clearwater, Florida over the Easter weekend, and having flown down from DC’s Dulles Airport on that Friday we had decided we’d enjoy driving back – with an overnight stop in Savannah, Georgia – on the following Monday. And that, of course, entailed renting a car.

The reservation with Enterprise was for a Ford Fusion or (you know the drill) something similar. That something similar was a Chevrolet Malibu, which needed to be washed – and would be washed – as soon as a 2019 Toyota Corolla, in all of its car rental ‘specialness’, was out of the wash bay. Or we could take the Corolla, and get on the road 20 minutes sooner.

We took the Corolla. And while I’m not sure we would have pulled the trigger with two-and-a-half kids and the attendant stuff that goes with those two-and-a-half kids, for just two the Corolla was as nice of a road car as you could imagine. Obviously, I-95 between FL and VA doesn’t offer many challenges, but traffic was moving (typically between 75 and 80 miles-per-hour), and the Corolla was comfortably composed for our roughly 14 hours behind the wheel.

That was then, and the ‘now’ is the all-new 2020 Corolla, imbued – in this instance – will all the hybrid goodness Toyota can throw at it. Had we had the Corolla Hybrid, it would presumably have done the 924 miles between Clearwater and the DC ‘burbs using just 18 gallons – that’s just $50! – of fuel. The ’19 Corolla rental was efficient (the gas gauge moved ever so slowly toward ‘E’), but it wasn’t 52 miles per gallon Hwy efficient.

Now in its twelfth generation, the 2020 Corolla is as all-new as that oft misused descriptive should suggest. While sitting on the same 106 inches of wheelbase as the last generation, the Corolla platform is new (Toyota’s New Global Architecture!), its track is wider, and front overhang has been reduced. You’ll not confuse this all-new sedan with Toyota’s all-new Supra, but the 2020 does deliver a sportier vibe, although as we type this we got hung up on ‘vibe’; we’re just not sure we should call it a vibe.

The sheetmetal is, as you’d guess, evolutionary, but represents a nice update on what’s gone before. With something like 46 million (or gazillion – my notes aren’t that legible) sold since the Corolla’s debut in 1966, it’d be foolish to reinvent the wheel – although Toyota offers 18-inchers on those models with conventional powertrains.

To create the Corolla Hybrid, and offer something those hybrid fans will embrace if they’re not fans of the aggressively redesigned Prius, Toyota

Combines a 1.8 liter four with two motor/generators through an electronically controlled (as you’d hope…) CVT. The total combined horsepower is but 121, but as Toyota’s press blurb suggests, the combo delivers ‘decidedly responsive performance’.

And while the electric assist of a hybrid might grab the headlines, no less attention was paid to the Corolla Hybrid’s engine. Featuring a long stroke, the Atkinson cycle powertrain combines (and pay attention here) a shorter intake stroke and longer expansion stroke than the more conventional Otto cycle powerplant. The end result is more energy extraction from the fuel, while the electric motors offset the reduced low-end power.

Behind the wheel, the Corolla Hybrid is conventionally benign, and for the target market, we can’t argue with that. The controls are generally intuitive, seats are comfortable and the visibility is reasonably good, helped in no small way by a substantial rearview camera. With just one available trim level – LE – you won’t see much in the way of comfort adds, but then, we’re talking $23,000 here and not, notably, $33,000.

For the bottom line, look no further than the above number, 53 miles per gallon City, room for four people and – with its generous trunk – most of their stuff. There might be an argument for leather (and for that we have the aftermarket supplier Katzkin), but for many, just ditching the Jetsonian architecture of the current Prius lineup may be enough.

For this writer, it’s more than enough. And it’s available in Toyota showrooms now.