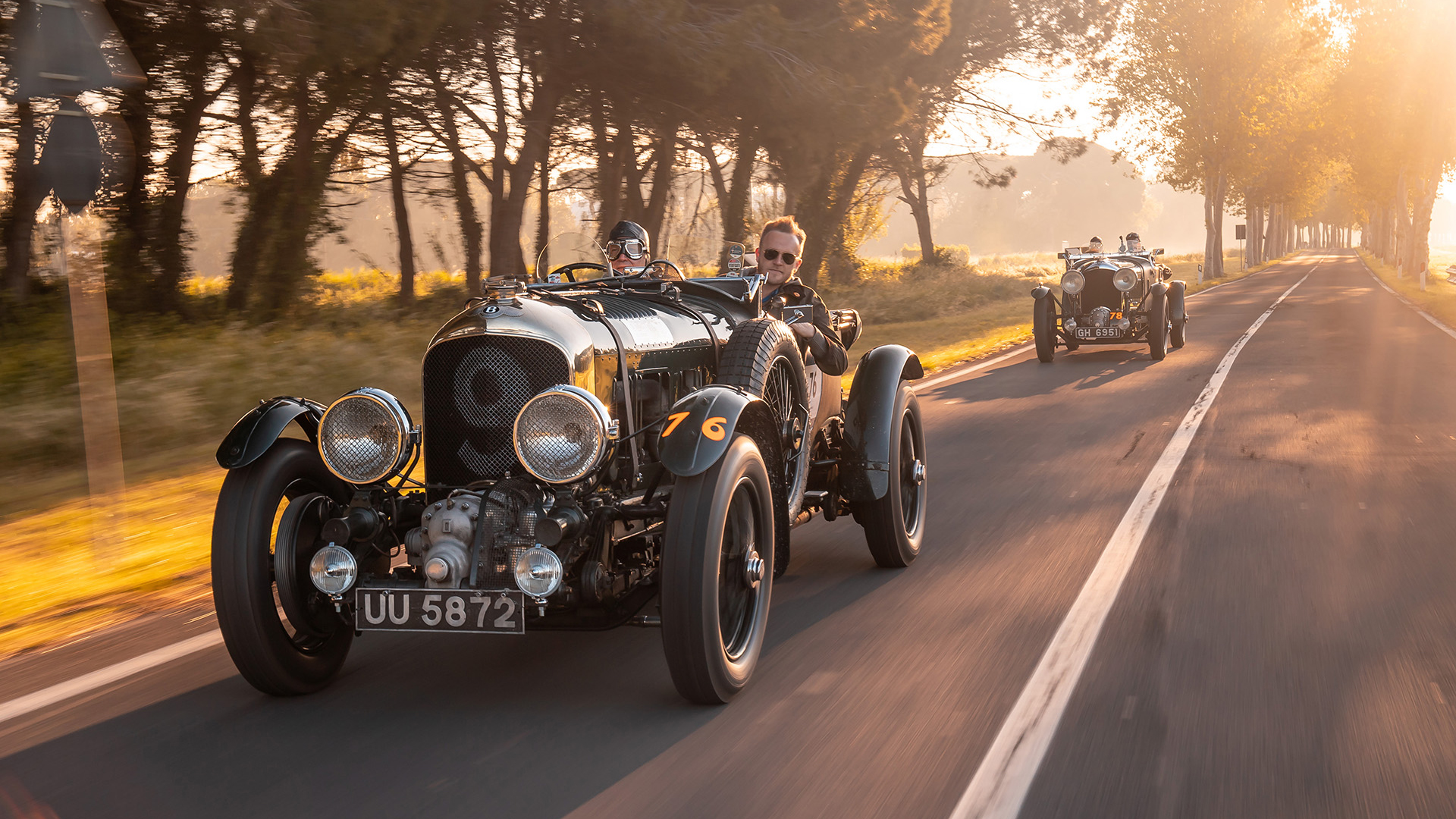 And Boys
Will Be Boys

On Bentley’s History Channel, i.e, its media page, Bentley’s first century is chronicled in a few hundred words, its history unfolding decade by decade. Among the many factoids, we’re told Walter Owen (W.O.) Bentley, born in 1888, had a low regard for automobiles of the late 19th and early 20th centuries. But then, who didn’t? Less than one generation removed from the horse-drawn propulsion, the horseless carriage was distinctly agrarian, notoriously unreliable.

It was the rapid mechanization of World War I which led to wholesale improvements in engineering and metallurgy. And according to sources at Wikipedia, it was Bentley’s promotion of aluminum pistons, replacing cast iron or steel, that punched his ticket to the Big Leagues. That recognition supported the Bentley Motors start-up in 1919, its first test of the iconic Bentley 3 Liter in January of 1920, and Bentley’s first production delivery in September, 1921. For the British carmaker, whose liquidated assets were acquired by Rolls-Royce in the depths of the depression and are now owned by Volkswagen, it’s been (we’ll borrow here from Lennon and McCartney) a long and winding road.

On that road there have been any number of historical markers. For those believing competition improves the breed, Bentley’s wins at the 24 Hours of Le Mans, beginning in 1924 and continuing in consecutive years from 1927 through 1930, cemented the carmaker’s reputation for both high speed and endurance.

Campaigned during those years by the Bentley Boys, the drivers captivated the world’s attention almost as much as the cars themselves. “The public liked to imagine them living in expensive Mayfair flats,” recalled W.O. Bentley. “Drinking champagne in night clubs, playing the horses and the Stock Exchange, and beating furiously around the racing tracks at the weekend. Of several of them this was not such an inaccurate picture.”

Of course, with the onset of the Depression the Bentley business model was drastically diminished, leading to its liquidation. With the purchase of its assets by Rolls-Royce the competitive nature of Bentley was garaged, although the cars continued to occupy their own sporting niche. Dubbed ‘the Silent Sports Car’, Bentley is one of a few brands, before World War II and in the decades after it, that define the modern Grand Tourer.

At a regional press preview shortly after the GT’s launch, Texas-area writers were introduced to the newest coupe, along with time behind the wheel of Bentley’s other, built-in-the-previous-century models. Hosted by PR exec John Crawford, with the able assist of driver Derek Bell, it was a grand lap around South Texas. The Continental GT was extraordinary then, and makes a viable pre-owned purchase today.

While benefiting from a couple of refreshes during the ensuing 15 (or so) years, the all-new Continental GT has only recently arrived on Bentley showrooms; it, like its predecessor, is stunning. As Bentley puts it, “with a completely new 6.0 litre, twin-turbocharged W12 engine, a step-change in technology (of course!) and a truly stunning design language, the new Continental GT is unmatched in its class. This Bentley GT coupé is the quintessential grand tourer – phenomenally powerful, beautifully designed and exquisitely crafted.”

The new Continental GT comes on the might-be-muddy heels of Bentley’s first SUV, the Bentayga. As you’d guess, a decade out from the last recession, and with the Social Democrats not yet taking the country, the Bentayga has been the cricket equivalent of a homerun. And while I’m not inclined to take $200,000+ of Bentley off-road, you – or your driver – can.

A century after its birth, much has changed in transportation and, to be frank, aspiration. But as the social order once again seems more stratified, Bentley’s intrinsic appeal is almost unifying. Unlike Rolls-Royce, now under the BMW umbrella, there’s something accessible about a Bentley that can’t be said for a Rolls – or others in its competitive segment.

Bentley’s luxury, underpinned by performance, is obvious, while – for most – a Bentley window sticker looks more like a house purchase. But from its early days immediately after World War I to the bombast of Brexit, Bentley provides a connection with the past, while propelling us balls-out into the future. For that, a tip of our hats to W.O. Bentley – and his Bentley Boys.