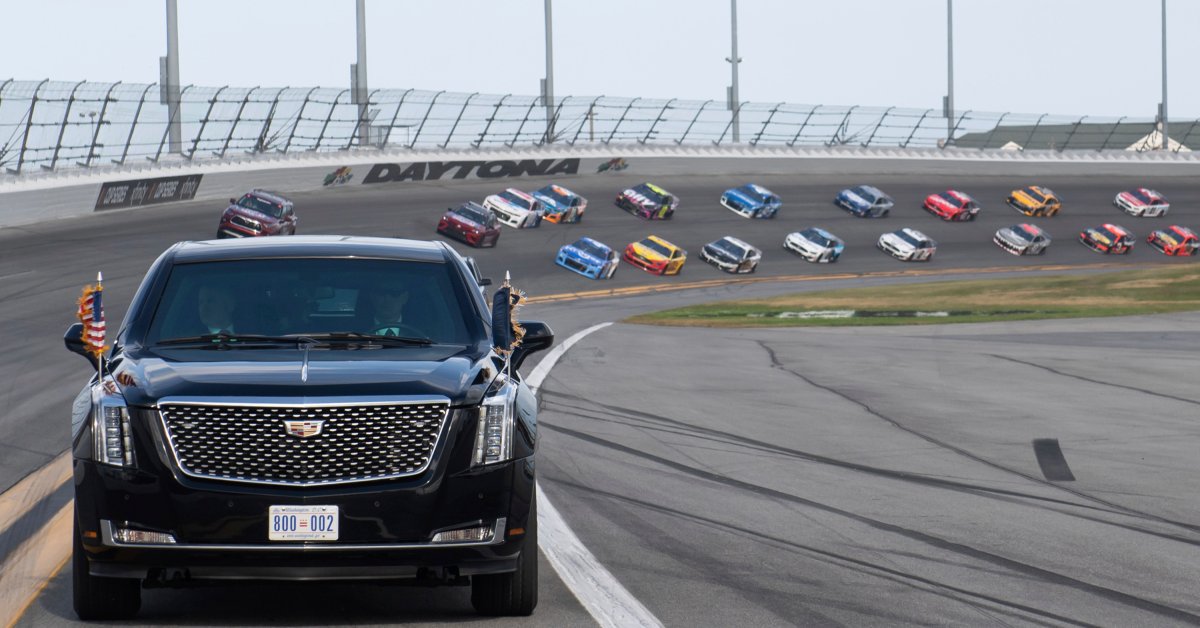 This past week, President Trump became the first sitting US president to be made a Grand Marshal of the Daytona 500 by NASCAR. The Secret Service announced on Wednesday that a 30-mile “No Drone Zone” will be imposed during the Daytona 500 in preparation for the president’s attendance. That means he will also be the one to announce “Gentlemen, start your engines.”

I’ll let the mainstream media debate whether this is a political stunt for the election, or a sincere gesture of patriotism at one of America’s original pastimes. Maybe it’s both? I don’t know and it wouldn’t help if I did. All I care about is the rumor that the President wants to take his presidential limo, aka The Beast, on a lap around Daytona Speedway before the race starts. That’s the part of the story that really caught my attention. A presidential limo going around turn 4 (as well as Trump veering left – ed.) sounds awesome!

The reporting came from Fox News’ John Roberts, citing multiple sources on Friday. Final decisions had not been made, but it’s a safe bet that Trump would jump, figuratively, at the chance to do something no other sitting president has done before him. He is already been made a Grand Marshal for the Super Bowl of stock car racing. Why not throw a cherry on the top of this cheeto-pie by taking one of the most impressive vehicles ever designed out for a lap around this historic oval. You can see here to enjoy some of the most luxurious cars which is sure to leave you in awe. Politics aside, I want to see The Beast do a lap! One question that comes to mind is who gets to do the safety tech inspection – NASCAR or the Secret Service?

And This Just In: Daytona 500 Postponed By Mother Nature

Sunday arrived, with the President making a grand entrance. Air Force One performed a low altitude fly-by near the track to let everyone know that the President was in the building. The Beast did do a parade lap as a pace car around Daytona International Speedway, with the President doing a Miss Daisy in the back. Some internet users jabbed at that fact, saying that he should have been behind the wheel. And while that would have been an interesting note in the history books, the reality is there was no way the Secret Service would allow a 73-year old man to drive a $Million limo on a race track.

Soon after the race’s start it had to be delayed twice due to rain. After a combined delay nearing 3 hours the Daytona 500 was postponed; it will be held today at 4pm and broadcast live on Fox. The only previous time the Daytona 500 has been postponed due to weather was back in 2012.