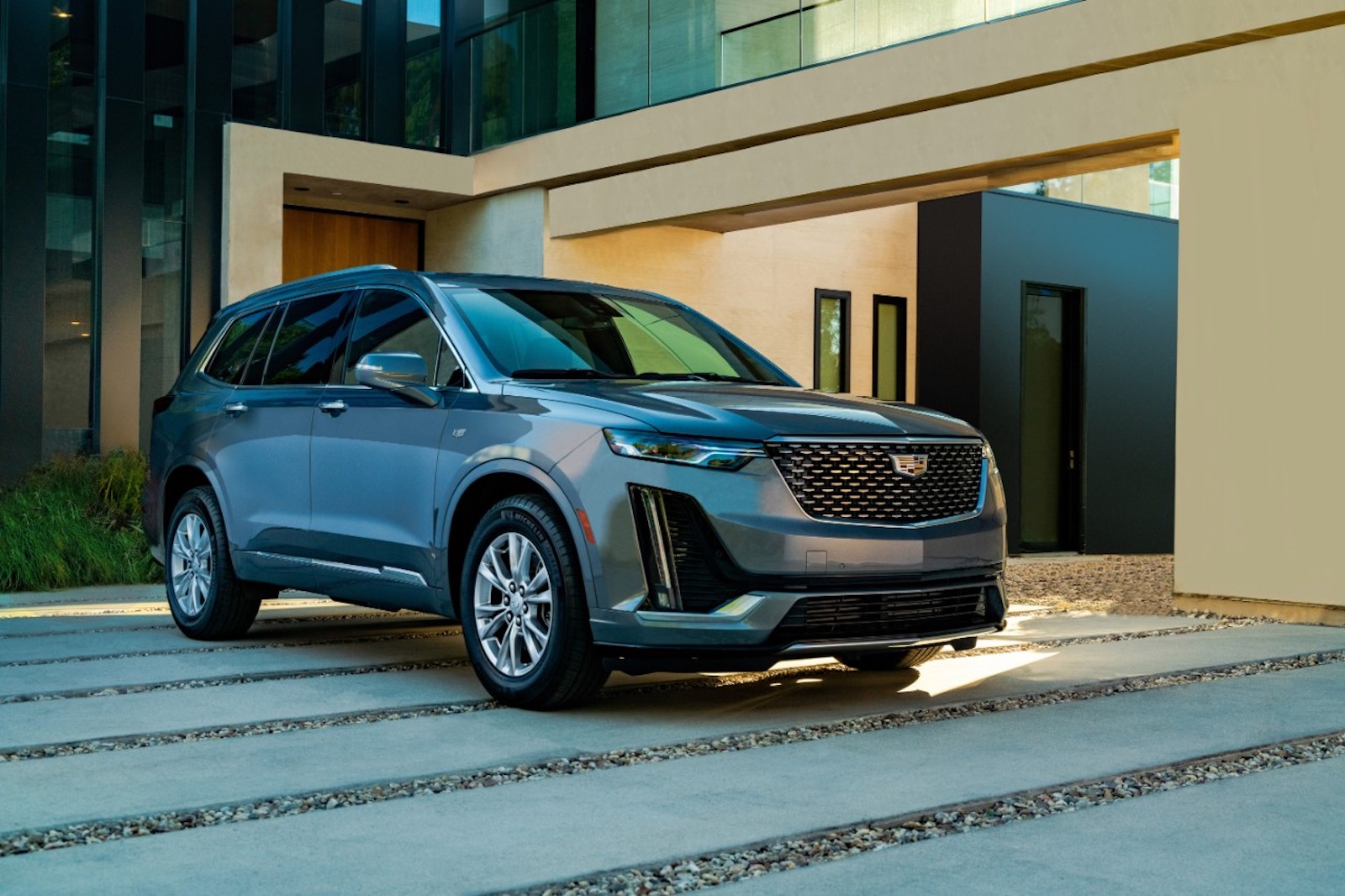 This was then.
We’re waiting for now.

For Cadillac dealers, the all-electric Lyriq, starting at $60,000, is due next summer and can’t get here soon enough. Not since the 1930 V-16 has Cadillac built a car from the ground up to be a Cadillac, flashing leading-edge styling and loaded with first-in-field technologies: solid roofs, multi-cylinder engines, electrical systems (including starters), climate control, and magnetic ride control.

Alas, for the last quarter-century or more, Cadillac has been like the crazy uncle at General Motors’ family gatherings, made to sit at the children’s table and generally ignored. To be sure, the brand has continued to deliver strikingly handsome cars, but generally built on the bones of the General’s working-class cousins.

Case in point is the XT6, a roomy and handsome machine with plenty of Caddy DNA in its sheet metal, but with the same chassis and mechanical underpinnings as the GMC Acadia and Chevy Blazer. Those are competent and competitive vehicles in the $33,000 to $45,000 price range, but the platform leaves the $48,000 to $58,000 XT6 fighting above its weight class.

Look, every mass manufacturer does this because it makes sense. Engineer a foundational architecture and driveline and make minor modifications across a wide product line. This maximizes ROI in R&D, supply chain, labor, and capital costs. That’s why there’s a lot of Toyota in every Lexus, a lot of Nissan in every Infiniti, and probably too much Honda in every Acura.

But with Lyriq, ahh, Lyriq, GM’s product development team is starting at the top. For the past five years GM CEO Mary Barra has channeled GM’s best and brightest minds into designing and engineering what will be the platform for dozens of vehicles by 2025. Already, we are seeing advertisements for Lyriq’s Ultium Platform that will undergird the Chevys, Buicks, and GMCs to follow.

At the same time, Barra has continued to sell the pickups and SUVs that customers crave with minimal modification, thus creating wide profit margins and hoarding piles of cash used to transform her company into an electric-vehicle producer, battery plants and all. That, however, is a bigger story for a different day.

Nominally, we came not to bury the XT6, nor particularly to praise it. The consensus of most reviewers is that it is good, just not Cadillac good. That thinking seems to have permeated the marketplace. The XT6 is one of the few vehicles in this milieu to still be receiving deep dealer discounts (about 12.5%, according to Edmunds.com) plus manufacturer’s incentives ($1,750, according to Consumer Reports).

Ok, at those prices it’s a good deal.

The XT6 slots just below Cadillac’s largest entry, the Escalade, starting price $76,195. That, of course, is a gussied-up version of the Chevy Suburban, with a starting price $52,300.

The XT6 rides on the same C1XX platform as a half-dozen GM products, including its smaller sibling, the XT5. The platform is favored by limousine and hearse builders, so we must figure it’s strong, quiet (gotta’ be for a hearse – Ed.) and comfortable.

Indeed, the XT6 is all those things. For its size and mass, about 70 inches tall and up to 4,690 lbs. with its AWD, it is remarkably agile and well-planted, even at speed. The ride is compliant, and the cabin is remarkably hushed. However, the same can be said for the Acadia and Blazer.

Two engines are available, but neither delivers exceptional fuel economy. A turbocharged 2.0-L I4 puts out 235 hp on premium fuel. It delivers an EPA estimated 21 mpg city, 27 highway. Subtract 1 mpg for AWD. Our tester came with a naturally aspirated 3.6-L V-6 that put out 310 hp on regular fuel. It got around 18 mpg in town, 26 highway.

When considering the price differential between premium and regular unleaded runs around 20 percent, and the greater complexity of high-pressure, small-displacement engines, the bigger block sounds like a better idea.

If it’s fuel economy you want, you can wait for the Lyriq or opt for the BMW X5 plug-in hybrid (PHEV in the vernacular). BMW’s PHEV gets 28 miles every day on electric power alone. It needs seven hours to recharge via a 110 outlet. New ones start at $63,700 but there are used ones in the market for a third less.

In the cabin, there is a lot to like about the XT6. Front seats are certainly Cadillac quality. If you opt for second-row bench seats, those are, too. There are plenty of USB Type C charging ports and the second row gets its climate controls. The third row is big enough for adolescents.

Controls are easy to use and understand. Our tester came with a navigation upgrade that included a 14-speaker Bose sound system. We strongly recommend that one.

Still, the XT6’s dash is no match for the Genesis GV80, an all-digital display that wraps itself around the driver.

A technology package includes a surround vision dashcam with multiple viewpoints. It lets owners use an up to 32 GB SD card to continuously record videos of the car’s surroundings while the car is on.

A suite of standard safety features includes forward collision warning and city-speed automatic emergency braking, pedestrian detection. A seat that provides haptic vibrations warning comes standard. Warnings from the various advanced safety features can come from a beep or seat cushion vibration. Cleverly, the left or right side of the seat can vibrate, indicating the direction of the potential threat. Both sides of the seat will vibrate to signal a front or rear collision risk.

If you want the good stuff, like reverse automatic braking and adaptive cruise control – which other manufacturers provide standard – you’ll need to buy the premium luxury trim.

We weren’t impressed with the XT6’s lane-keep assist, which tended to bounce from side marker to side marker while filling the cabin with distracting aural and visual notifications. That’s going to get drivers to shut it off and thus eliminate a driver-assist feature that can reduce head-on and rollover risks by a third. Please note: If your lane warnings keep going off, the problem is not with the car.

Nor were we impressed with the XT6’s headlight brightness. That’s one place where it revealed its middle-class upbringing. Fortunately, Caddy makes auto high beam a standard feature.

Regardless, the Insurance Institute of Highway Safety makes the XT6 a Top Safety + Pick.

The consensus pick in this category is the Genesis GV80, which looks and feels and drives like a Mercedes ought to, starting at $48,900. One caveat: It is powered by a turbocharged 4-cylinder, a type of engine for which Hyundai has paid out billions of dollars to settle two different class-action suits. We assume that by now Hyundai has learned its lessons.

The BMW X5 is a top-drawer competitor, as are the Audi Q7 and Q8, though both have abysmal fuel economy ratings. We think the best choice in terms of features, comfort, power, reliability, and retained value is the $48,020 Lexus RX 450h. Powered by Toyota’s ubiquitous 3.5-L V6 teamed with Toyota’s well-established hybrid powertrain, it delivers 30 mpg.

Built on the same platform as the Toyota Highlander, the Lexus RX series is packed with enough premium materials and features to make it feel like a Lexus.

That’s a lesson Cadillac might learn. But hey, the Lyriq is coming.