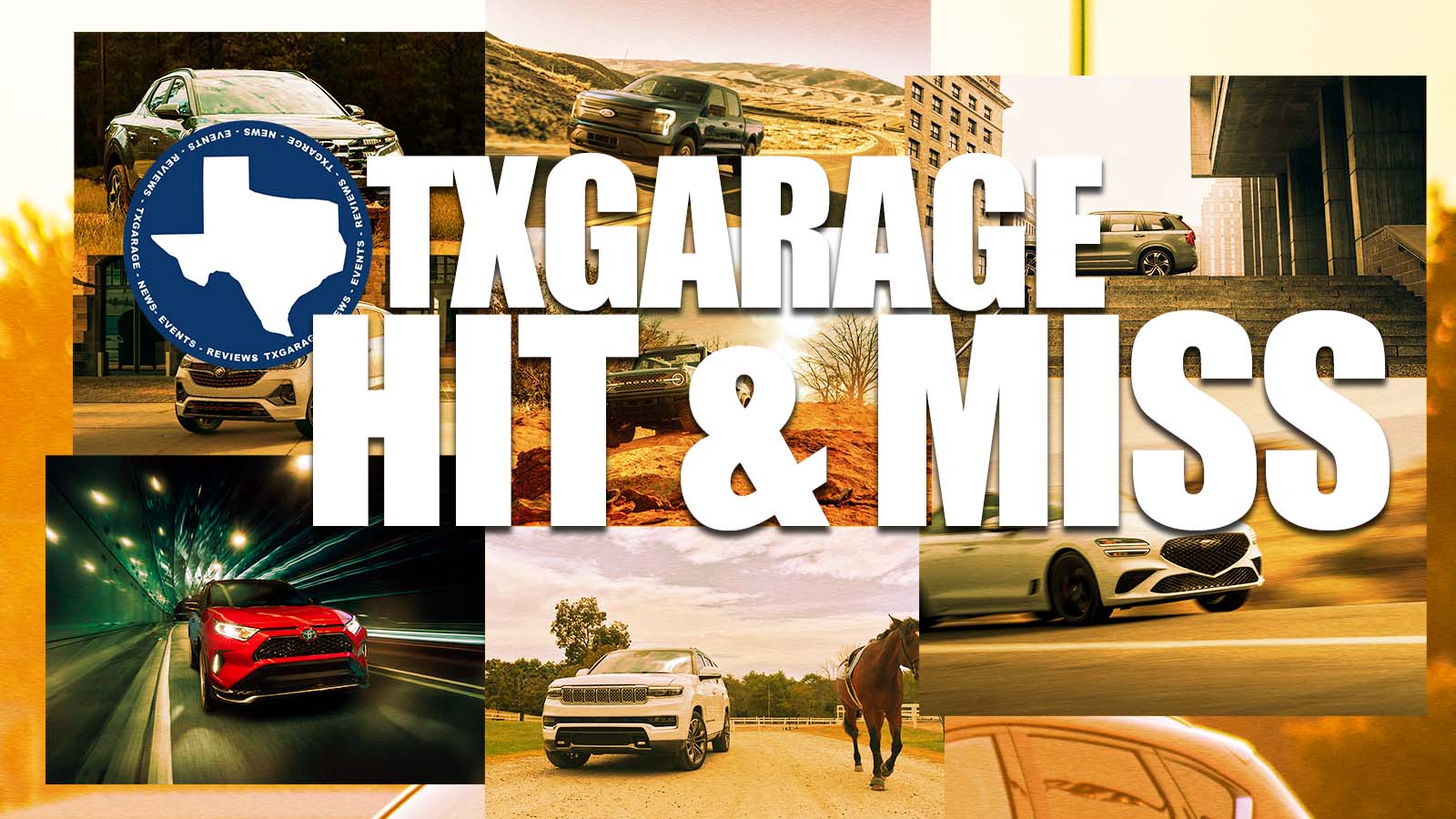 Our Hits and Misses –

SAYING GOODBYE TO THE BAD

It’s been – to put it bluntly – quite the year. With vaccinations we had hoped to be back to normal; you know, attending gatherings, events and – in this context – the auto show or press launch. But the auto show, as a category, took a stutter step into 2021, with more events cancelled or downsized than staged. And while press events resumed, they most often consisted of abbreviated schedules and reduced guest lists. Most of us relied on the press fleet, and even those were hampered by both smaller inventories and – we’ll assume – constrained budgets. Thankfully, enough was going on to assess the year in the automotive realm. Here, we provide our list of hits and misses. DB

THE HIT: There are any number of cars or trucks I’d nominate, if – of course – I’d had the opportunity to drive them. At Ford I’d give a shout-out to the company’s Mustang Mach-E EV and all-new Maverick compact pickup, if either had made an appearance in my driveway. But instead of reserving for me the Mach-E or Maverick, Ford delivered its F-250 diesel. That, of course, is one capable truck, but about as newsworthy as Mike Pence. If reduced to what I’ve driven, the nod goes to the relatively new Genesis G70 sport sedan. With optional V6 power this is one helluva way to go down a highway, and if you forego some of the predictable upgrades you can keep the price close to $40K. That’s still a lot of money, but it’s an amazing amount of car.

THE MISS: As a long-time Jeep owner, I had high expectations for the new Grand Wagoneer, even without a Jeep logo attached to the hood, hatch or front fender. But sitting in my driveway it looked soft, almost flaccid. And nowhere did I see justification for a six-figure window sticker. As noted in my tepid review, Jeep’s Grand Cherokee L will give me the 3-row I want and (presumably) need, and will do it for under $70K. That dog will hunt, while the Grand Wagoneer’s dog will only eat. And drink.

THE HIT: It is hard to winnow the list of fine vehicles that filled my driveway in 2021. With a better chassis, suspension, driveline and UX, Ford’s Bronco is clearly the Jeep slayer; the Genesis GV80 is a jewel among luxury midsize SUVs; the superb assembly of the latest Ford Escape hybrid shows new Ford CEO Jim Farley’s sermon on quality is being heard; and Honda’s more truck-like Ridgeline may yet make a dent in that market. The real game-changer, though, may be Toyota’s sharply executed RAV4 Prime. Offering a plug-in range of 42 miles plus a gas-electric hybrid capable of 500 more, the RAV4 Prime offers range-wary consumers an altogether pleasant and safe way to dip their toes into the fast-closing tsunami of electric vehicles.

THE MISS: There were a few. Ford’s Expedition and Chevy’s Tahoe/Suburban lines are gas-sucking behemoths well past their primes. In the same vein, the Chevy Silverado and GMC Sierra are reduced to selling their tailgates because so much remains uncorrected. Cheap plastics, uneven assembly, a dashboard that looks like it was designed by a committee at war with itself all say GM CEO Mary Barra has moved the talent and resources into transforming GM into an EV powerhouse. That the things continue to reward GM with record riches is proof positive the boss knows what she’s doing. Still, the reward goes to the underachieving Volvo XC90. Five years into its latest iteration, little things still don’t work right, and the model is completely undermining Volvo’s reputation for quality.

THE HIT: Ford’s Bronco is a long-awaited vehicle that is finally getting to the dealers, although – I’ll add – not enough are getting to dealers; consumer demand far outstrips available supply. No doubt this debut has been long anticipated by passionate Bronco customers. This is the right vehicle for a market with lots of pent-up customer demand. Best of all, it is just great on and off-road and a lot of fun to drive…and it fits in the garage. My only disconnect: Ford always starts the buzz so early and then takes forever to get it to market. I know marketing is important, but really. The other side of the coin is that unlike Jeep’s Wrangler, it has a more comfortable and composed ride for everyday use.

THE MISS: This year there have been many misses, but the long-awaited Ford F-150 Lighting has been so overmarketed and so many customers have made reservations, Ford can only handle a fraction of customers with its first-year run. The projection is around 80K builds the first year, and they have around 200,000 customers who want one; it will take two years to get one for many customers, which is a bummer. And will they wait with other trucks coming to market? Keep in mind this will be an expensive truck, and as truck prices keep creeping up will it hamper the sales? Ford doesn’t think so.

THE HIT: Ford Motor Company President Jim Farley is my pick for 2021’s hit. Since he took over the top leadership role from the feckless Jim Hackett, Ford Motor Company has changed its tune.  Sure, Farley nixed all the cars, but look what he added to the Ford showroom. The reinvented Bronco is getting rave reviews, the newest F-150 is nothing short of spectacular, the Mustang Mach-E blows Tesla out of the water, and even the tepid Maverick will be a hit with folks who want a small pseudo-pickup. And there is more exciting stuff coming in model year 2022. I can’t wait.

THE MISS: What’s the point of the 2021 Buick Encore GX? Currently the Buick lineup consists of only crossovers and the two top ones (Enclave and Envision) are good and the entry one (the Encore) is adequate.  So for some unknown reason, Buick added another compact crossover that’s not markedly better than the entry model they already have, and then confused everyone by naming it the Encore GX.  The GX engine is an under- powered three-cylinder that has no right to be anywhere near a near-luxury vehicle.  The GX struggles mightily under a full load to move safely into highway traffic.

I might approach this differently than others here at TXGARAGE, but then, I’m the ‘boss’ – so I can do that. First, you’re getting this intro to explain my take when looking back at the year. Second, I’ll be listing my miss first as it will better explain my hit.

The more time I have under my belt as an automotive journalist and enthusiast, the less I get truly excited about new vehicles coming out. I can appreciate pretty much any vehicle and understand where it fits in among all that is out there, and how others could or would be excited about that vehicle – but for me it takes a bit more. To really get me excited about a vehicle these days, I need to know the company is taking a risk in putting it out; either a risky design, or entering (or creating!) a segment in a risky way. I think more of it comes down to this: Multi-billion dollar companies should take more risks when making decisions about their line-up. With that, I also understand why they wouldn’t, so when I see a company taking a risk I notice.

THE MISS: With all of that, I do have a few vehicles I drove this year that I consider a miss. The Lexus IS 300 and Infiniti Q50 are two examples of what I’m talking about. They’re both great vehicles in their own right, and I wouldn’t look down on anyone who decided to buy one, but after so many years of incremental updates I’d love to see more out of these companies. The other ‘miss’ is Nissan’s new Frontier, which had a big update this year that you could call risky, but after putting butt to seat just ended up feeling like a safe bet.

THE HIT: Okay, so I do have one solid hit and a few honorable mentions. The hit is Hyundai with their new Santa Cruz. When you talk about risky moves, Hyundai tends to be the manufacturer taking them these days. It shows in their designs throughout the last several years, as well as quirky vehicles like the Veloster. Now we have the compact pick-up truck that I’ve been begging Hyundai to produce for years. My only slight gripe is that they took so long to pull the trigger and bring it to the market that now they immediately have competition. That brings me to my honorable mention, the Ford Maverick. For the same reasons I’d say the Maverick deserves a mention here even though I don’t like the design as much, but at least Ford was willing to take the risk. After bringing the Mustang Mach-E to the market as well, Ford seems determined to take a risk and grab the win.

Getting On My High Horse – MUSTANGS I HAVE LOVED: NUMBER EIGHT
TERRY BOX: RIDING HOME ON HIS HIGH HORSE
Event Calendar