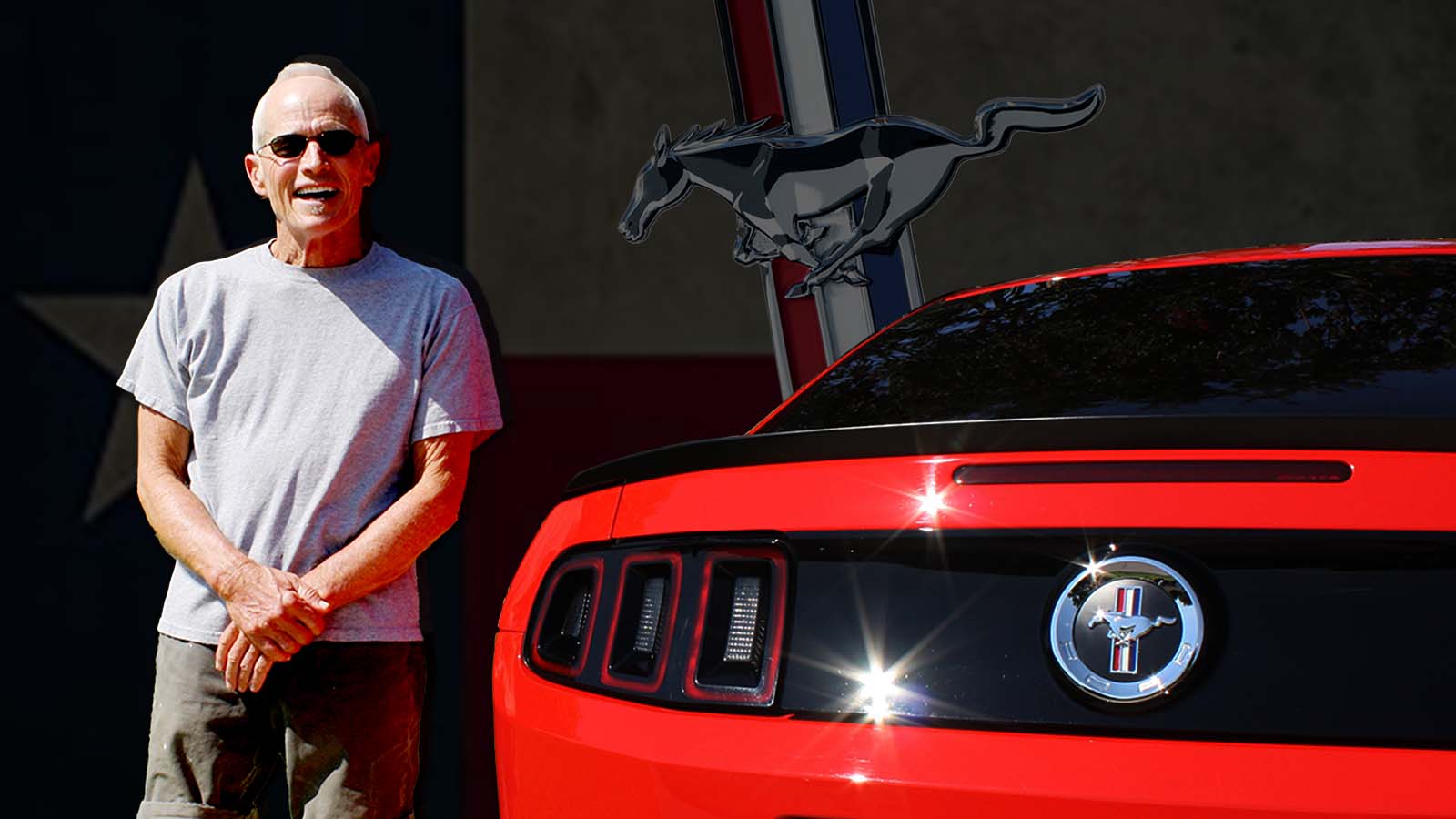 RIDING HOME ON HIS HIGH HORSE

The news, posted by radio host Jerry Reynolds on Facebook, hit me like the bark of an unmuffled exhaust. Longtime automotive reporter Terry Box had passed away following – I learned later – triple bypass surgery. I knew Terry was banged up with an ankle injury, but didn’t know of the heart issue, or those symptoms requiring surgery.  What I know now is that the signature voice of a damn good journalist has left us, and with it a take on the automotive lifestyle which, while not exactly unique, was as unrestricted as Dallas’ daily would allow.

We were fortunate to have Terry as a contributor this past year, providing us with an automotive memoir of his Mustang ownership. As a single guy for much of his adulthood, Mustangs were what he wanted, and Mustangs were what he drove. In retrospect, they were a perfect match, both having an everyday/everyman demeanor capable of great energy. I had hoped to get Terry’s editorial take on the Mustang Mach-E, but then, we probably had his take; Terry recently bought a new Mach 1.

We’ve asked a few that knew Terry to provide their thoughts. If interested, Terry’s contributions to txGarage.com are here: https://txgarage.com/author/terrybox/

Everyone universally enjoyed Terry Box’s reviews of cars and trucks; he had the unique tact of breathing life into these vehicles. However, it was his stories about performance that really stirred the imagination.

Terry was a hot rodder at heart, an art form he celebrated in prose rather than sheet iron. A contemporary of Texans Carroll Shelby and Bill Neale, Terry was passionate about vehicles that followed the hot rodding tenants of customization, enhancement, gorgeous styling and going fast. He had a gift for turning machines and their creators into national influencers that elevated the art of the automobile.

Though physically small, Terry had a larger-than-life personality that made him popular at any occasion. With a wicked sense of humor, gracious storytelling and ability to cut through rhetoric, he was a valued friend and companion on the road of life. Terry Box will be deeply missed, and we are all better for his influence and friendship. Scott Black, TimePiece PR

Terry was a legend. His deep knowledge of cars, passion for trucks, and love for the Mustang defined his approach to automotive journalism. Tough but fair, working with Terry was always an opportunity to learn, laugh and exchange opinions. He knew a lot but was humble about it, always listening, intrigued by the story. Terry was an old-school note-taker, not a cellphone kind of reporter. As a fellow runner, he exchanged tips and stories that only runners may understand. Authenticity was his trademark, and that made him the legend he was. Alvaro Cabal, Communications Manager Ford Motor Company

Terry Box as an automotive writer is one to be remembered.  I worked for GM Communications and was based in the Dallas area.  Terry was a go-to for coverage of the auto industry.  Not only auto reviews, but also covering the GM Assembly Plant in Arlington.  Terry, you will be missed!  One of the best! Craig Eppling, GM Communications (Retired)

I met Terry Box when I first started writing about cars in the early 2000s.  He was my go-to expert on all things with an engine and wheels. It was hard not to be jealous of the guy with a dream job.  And when all of us were settled down and coasted into middle age, he was living his life to the fullest. Any event Terry attended automatically became infinitely more enjoyable. While the executives played their well-considered presentations, Terry always had a tidbit to share about any subject on the table.  He’ll be missed on every level of the industry. Steve Kursar, txGarage Contributor

Personally, I always enjoyed Terry’s down-to-earth personality and his deep connection to customers in Texas. He was able to make both news and reviews meaningful in a way that clearly worked for the people he reached. Mike Levine, Ford Motor Company

I met Terry in college at UNT. We were in sophomore reporting together, along with several other long-time friends. Terry was a staffer on the North Texas Daily, while I worked on the yearbook staff. Those of us who spent extra time in the Journalism Building formed a bond that remains today. We partied together as well. So, it was especially nice later in my PR career to work with Terry when he covered automotive for the Dallas Morning News and I represented Toyota in the region. He was a trusted friend and will certainly be missed! Marilyn Pippin

Terry had a love of cars like nobody I have ever known.  He had a way of mixing his vast knowledge of cars with his extremely funny sense of humor.  When Terry told me he was retiring from the Dallas Morning News, I jumped at the opportunity to add him to my staff at CarProUSA.  He added a whole different dynamic with his reviews.  All of us in the auto industry, especially in the North Texas area, will miss the wit, knowledge, and passion with which Terry Box blessed us. He cannot be replaced. Jerry Reynolds, The Car Pro Radio Network

I will remember Terry for his quick wit, exquisitely written car reviews and tenacious love of manual transmissions. Yes, it stung a little when on the receiving end of a negative car review, but his criticisms were so skillfully written you could not help but admire his work, even when he did not like your vehicle.

Fortunately, we made several cars he enjoyed driving. His 2014 review of the Dodge Challenger R/T Shaker is an ode to the cars he loved and a fitting example of his rebel heart. The only thing that rivaled his affection for six speeds was his all-out love of his grandkids. RIP Terry, you’ll be missed by many. Kimberly Shults, South Region Communications, Stellantis (formerly Fiat/Chrysler).

I think I first met him in 2005 when I was on the Lexus team and we were launching the second-gen IS. Marilyn Pippin put on a great regional drive event. I flew in from LA, and had a chance to have lunch with Terry, whom I knew by name as a long-time reporter at the Dallas Morning News.

He was a great guy to chat with about cars and the industry, but also about a lot of other things, like the Cowboys, Texas politics and just about anything else. He had really interesting stories about all those areas he covered over his career. Greg Thome, Toyota Corporate Communications.

Continue Reading
You may also like...
Related Topics:featured, Terry box

Our Hits and Misses – UNMASKING THE GOOD STUFF, SAYING GOODBYE TO THE BAD
PLUGGING INTO TEXAS – EVs grow in popularity, but infrastructure lags
Event Calendar