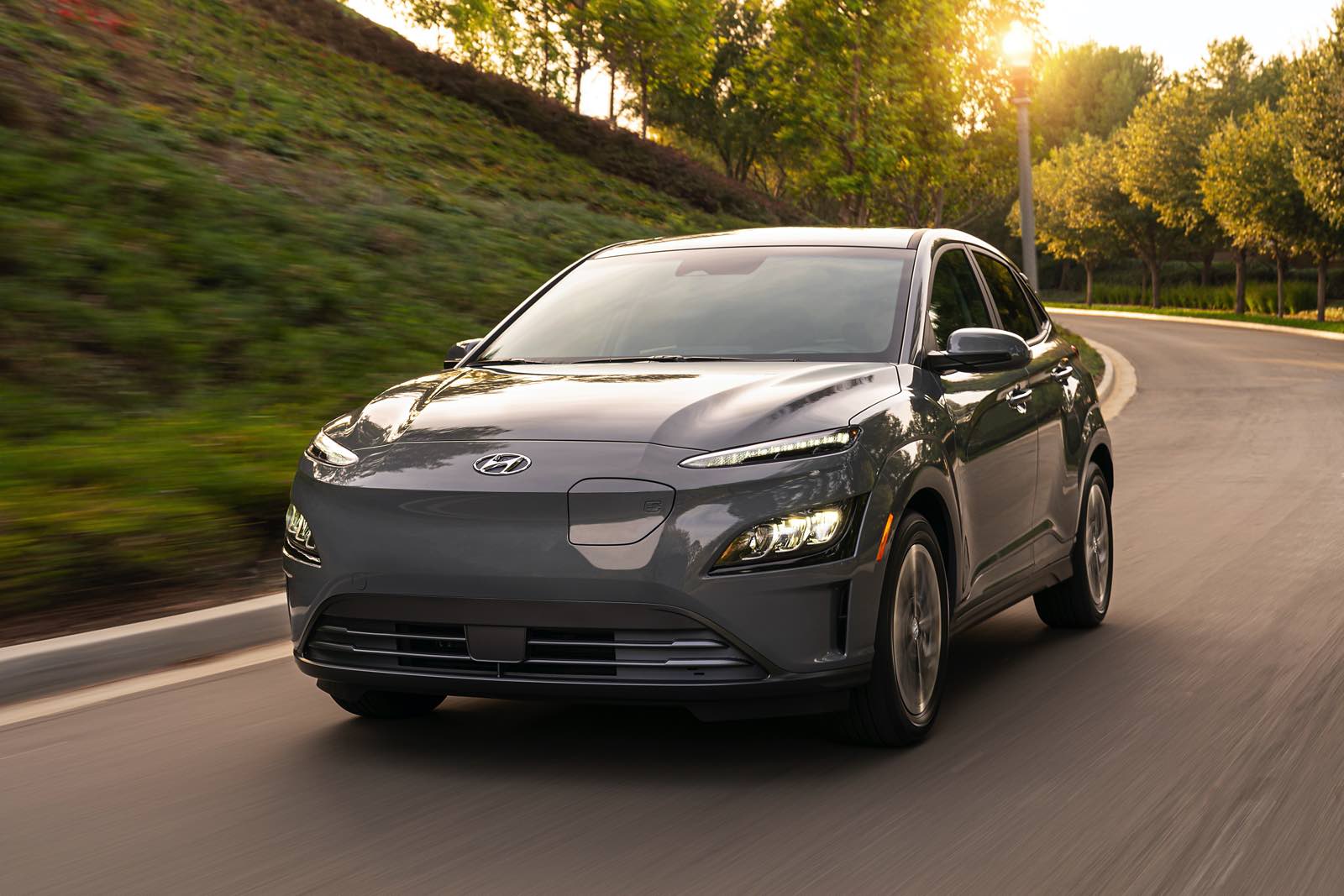 No sooner had Ford’s Mustang Mach-E been picked up by my press provider than – it seems – Hyundai’s Kona EV landed in my driveway. And with gas prices rising almost as quickly as Wall Street is falling, the arrival of a loaner which doesn’t burn gas could not have been more timely. Hyundai’s somewhat conventional – at least outwardly – take on EV technology goes about its business quietly, but its restrained demeanor almost shouts (SHOUTS!) competence.

Since Hyundai’s Kona first arrived in the U.S., I’ve been impressed by its footprint. In the subcompact crossover category, more than a few can be dismissed (Ford’s EcoSport, for just one) for their toylike, almost irrelevant presence. Despite its smallish footprint, the Kona comes with a visual heft that builds on its smallish stature. And while Tesla and the Mustang Mach-E are immediately recognizable as something different, Hyundai hides the Kona’s electricity with little more than a grille ‘delete’ and painted fender treatment.

Its small footprint is confirmed by its spec sheet, with an overall length of 165 inches sitting on a wheelbase of just 102 inches. And it boasts an all-in curb weight of between 3,700 and 3,800 pounds. Of course, a big part of that curb weight is the battery pack, which would be the story for virtually any EV with competitive range; the Kona EV’s range is competitive, with a claimed 258 miles from a battery capacity of 64 KWh.

As noted, the initial impression is conventional. Hyundai’s Kona lineup is, at this point, well established, and with its 1.6 liter turbo connected to a dual-clutch transmission delivers genuine fun as an around-town hatchback. In short, there’s nothing here to startle you, and if looking for a comparison I’d think it most resembles Chevy’s Bolt. The proportions are necessarily abbreviated, but the upright seating and reasonable greenhouse supply a day-in, day-out utility you don’t often get from this segment. And while trying like h*ll to stay objective, I really liked the press car’s Galactic Gray metallic paint.

Inside, buyers of today’s Kona EV benefit – in my view – from a conservative approach to EV design; in short, Buck Rogers never entered the building. Instead, Hyundai’s design team took what the Kona platform gave them, messing with it as little as possible. The dashboard layout remains conventional, and Hyundai kept those buttons that make everyday driving just that much easier, much more intuitive.

In the test Kona’s Limited trim you’ll sit on perforated leather. Cushions are supportive, and four adults will find ample room. While the Kona is positioned as a compact crossover, you’ll not need to step up to access the cabin, but then, the Kona provides only six inches of ground clearance. Once inside controls – as those of us in the ‘biz’ observe – fall readily to hand; there’s little here to confuse, and most of it is accessible. A push-button starter lights the candle, although – like virtually all EVs – you’ll be hard-pressed to distinguish ‘on’ from ‘off’; the operation is utterly silent.

The motor’s 201 horsepower and 291 lb-ft of torque move you from rest smartly, and will propel you to a governed top speed of 104 miles per hour. Of course, we don’t go 104 miles per hour, but that does speak to a relaxed, confident operation at legal highway speeds. The point-and-shoot capabilities of an upright, smallish EV can’t be overstated – this is simply the perfect in-town runabout, whether you’re negotiating space with other cars or able to squeeze into the parallel parking spot the Tahoes are avoiding.

The Kona’s 258 miles of range is fully competitive with most standard claims, but I gotta’ tell you: If thinking EV, either have a home charging unit or be able to access a fast charger at your workplace. A Level II charging unit will take 9 hours to move you from 10% to a full charge, while the Level III will do it in 64 minutes, and a Level III Quick Charge does it in just 47 minutes. Get the home unit, or talk the suits into installing a commercial charger at the office.

Opt for the base SEL trim with $3,500 of Convenience package and you’re most of the way toward the Limited trim, at a savings of $5K. Ask your dealer about Katzkin leather – around $2K – and all you’re missing is the bigger infotainment screen and better audio. This year’s Hyundai buzz will be devoted to the carmaker’s new Ioniq 5 EV, but don’t count the Kona out.