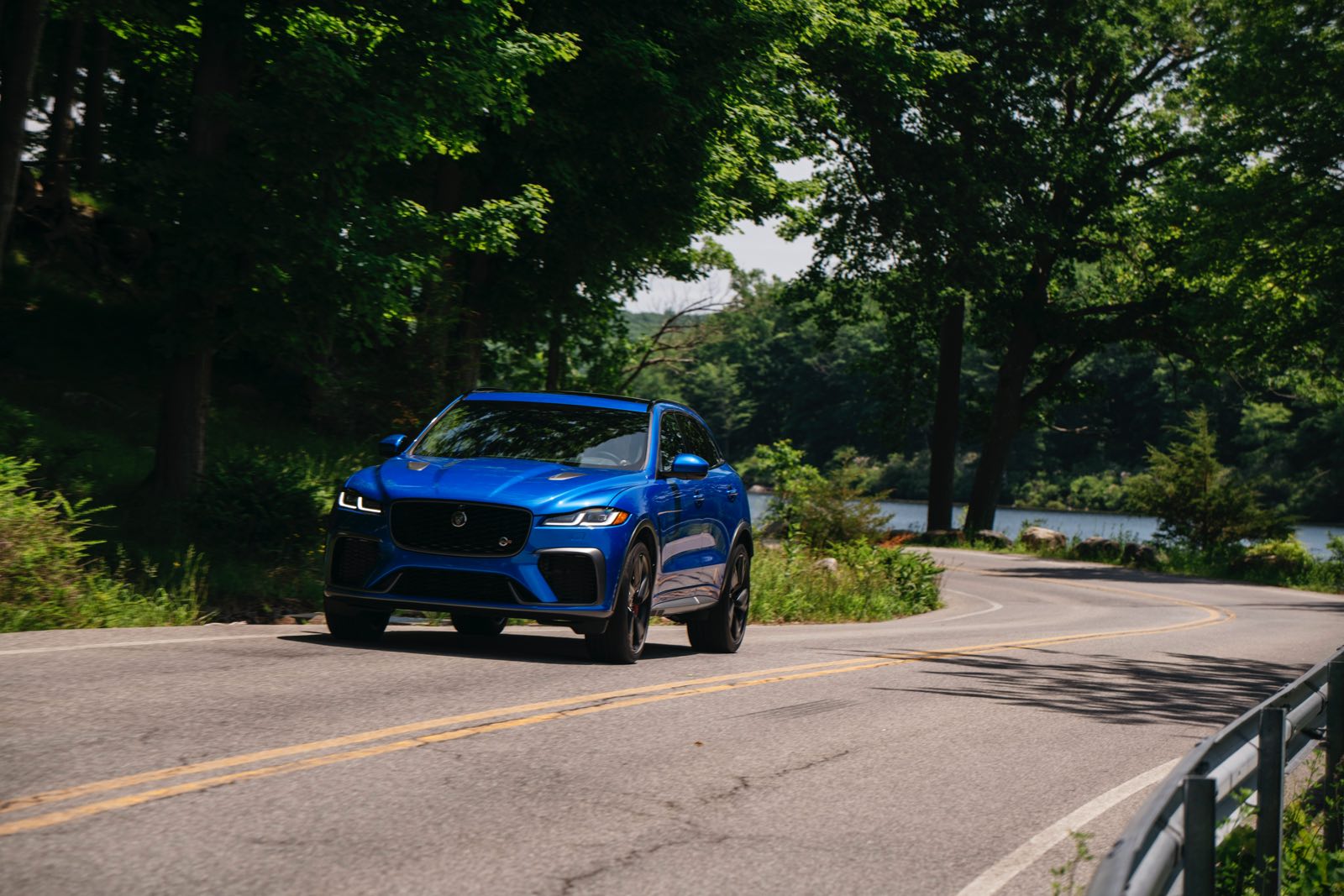 It was in 1922 that what we now know as Jaguar was formed as the Swallow Sidecar Company, building motorcycle sidecars before offering bodies for passenger cars and, not too long after, the whole automotive shebang as S.S. Cars. (The name change to Jaguar occurred in 1945, but you’d think it would have taken place by 1939; I’d hate to be dodging German bombs behind the wheel of an S.S.) Given that 2022, on some level, is Jaguar’s centennial, I reference Swallow because, for founder William Lyons, today’s all-consuming focus on the SUV – begun by Jaguar with the intro of its F-Pace compact crossover in 2015 – would be hard to, uh…swallow.

Sir William’s design philosophy would typically accommodate the practical, but not at the expense of a car’s design or composure. From the carmaker’s very beginnings to its relatively recent XF Shooting Brake, Jaguar’s were inevitably drop-dead gorgeous while enjoying an accessibility well below what that drop-dead sheetmetal would outwardly suggest. Lyons long life did not allow him to witness the market’s rush to the SUV, but my guess he – and by extension, the Jaguar product team – would have been slow to adapt, and once moved to adapt would have done so with the Brit version of kicking and screaming – you know, a stiff upper lip.

With Jaguar’s F-Pace, there is a lot to like in Jaguar’s interpretation of the crossover concept. While Land Rover and Range Rover (your pick!) is a world leader in building vehicles capable of taking you from the Red Carpet to the Rockies, if Jaguar is to survive as a separate brand it needs a credible crossover in its corner of the Jaguar Land Rover showroom. To that end, the F-Pace was introduced, vying for the monetary affection given – at that time – to compact crossovers from BMW, Benz and, more recently, Alfa Romeo’s Stelvio.

Staying true to Jaguar’s value mantra, a base F-Pace begins at but $50K, not much more than the average transaction price of today’s very average automobile. Of course, that $50K nets you a 4-cylinder turbo and a 0-60 time of just under seven seconds, faster than a CR-V – but perhaps falling short of what you want when considering JAG-U-AR.

Step up to the F-Pace R-Dynamic S and the $15K surcharge puts you behind a 3.0 liter turbocharged and supercharged inline six producing 395 horsepower and 406 lb-ft of torque, driving all four wheels through 8-speed automatic and ‘satin’ gearshift paddles. In a word, this drivetrain is wondrous, every bit as smooth as ‘inline six’ suggests, with just enough visceral appeal to have you thinking ‘Philip’ rather than ‘Charles’. Married to a platform that drives smaller than it is (aided, we’re told, by both Adaptive Dynamics and Configurable Dynamics!), this is one eminently nimble sport utility for four real adults and their stuff.

In the walk-up I was impressed by the F-Pace’s Bluefire Blue exterior, as well as its Siena Tan upholstery – although not a big fan of seeing the two of them together. If comparing the F-Pace in profile to others in the segment, I’d think it comes closest to the Alfa Stelvio, another performance crossover whose sheetmetal doesn’t distract from the task at hand. The F-Pace is clean and uncluttered, and while I might wish for a bit more glass area and outward visibility, it’s easy to live with in today’s traffic.

What’s less than easy is the Jag’s infotainment screen, where the only good news is the relative independence of HVAC controls. Beyond that, changing audio channels is far too cumbersome and – at the same time – far too distracting. Obviously, some of this is attributable to my relatively short time with the test vehicle, and some to my age – roughly sixty years older than my grandson Rhys. Rhys had no problems with the infotainment; here’s hoping he gets a good job and can afford – at some point – a new Jaguar.

If there’s one caveat in all of this goodness, it’s the resale value of Jaguar – even in a used car market benefiting or suffering (whether you’re selling or buying) from abnormally elevated values. With a base price of $65K and an as-tested price of $82,000, the F-Pace R-Dyanamic is in the crosshairs of better-established players, including Audi, Benz and BMW.

If Jaguar is offering subsidized leases, that’s your best option. Or simply buy it (with, I’d think, an extended warranty) and drive it ‘til the proverbial wheels fall off. For the money it offers a lot of understated elegance, along with, when you step on it, a bit of a bad boy attitude. A little flash – as it were – in the right seat of your jumpin’ Jag.