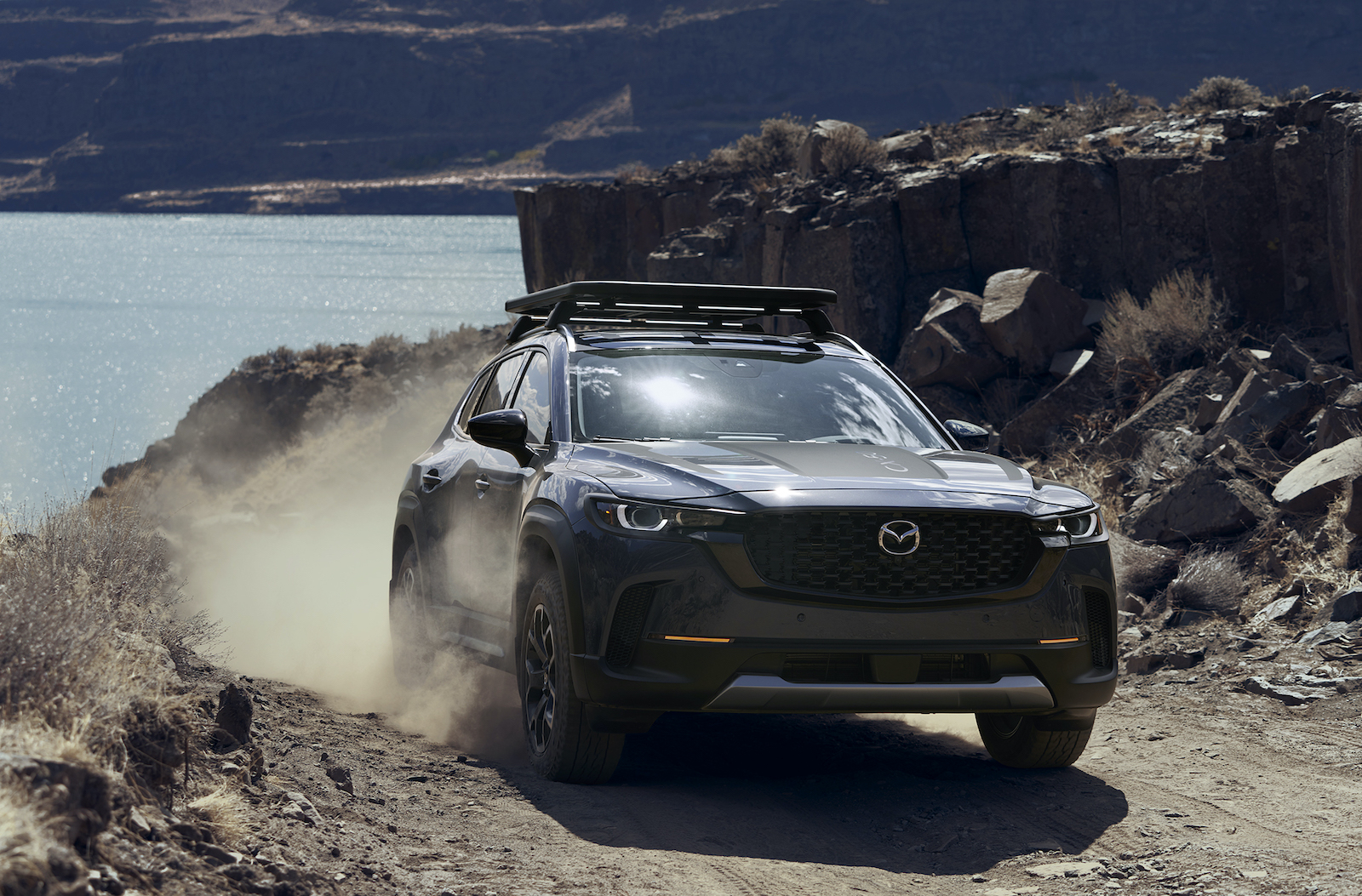 Targeting buyers who want their compact SUV to do more than haul kids, groceries, and soccer balls, Mazda has recently introduced the CX-50, a sporty machine aimed at off-road enthusiasts.

With standard all-wheel drive, capable of towing up to 3,500 pounds, offering accessories that include bike racks and roof-top tents and built at the same Alabama plant as the Toyota Corolla Cross, the CX-50 makes for an attractive addition to the Hiroshima brand’s lineup.

Though Toyota and Mazda jointly built and operate the Huntsville, Alabama plant, design similarities and parts-sharing between the Corolla Cross and CX-50 are few. They are assembled on different lines.

Riding on a slightly larger and taller rendition of Mazda’s subcompact CX-30 crossover and Mazda3 compact car, the CX-50 comes in nine models ranging from $28,025 to $42,775. That’s slightly higher than what may have been the vehicle’s market benchmark, the Subaru CrossTrek, but as with all Mazda models, the price seems justified by the generous use of upscale interior materials and flawless fit and finish.

All CX-50s come with Mazda’s aging 6-speed automatic and one of two adaptations of its proven 2.5-L Skymatic-G four-cylinder. The naturally aspirated four delivers 187 hp, and a turbo version cranks out 256 hp. We found the turbo version nicely keeps with Mazda’s zoom-zoom heritage, offering a quick throttle response into the triple digits. We previously drove a Mazda3 and found the non-turbo just adequate; it’s hard to see how this powerplant would perform well in the CX-50, having a curb weight some 325 lbs. heavier.

As with every Mazda we’ve ever tested, steering is linear and nicely weighted. Handling is sports-crisp, though that comes at the expense of ride comfort, which tends to be busy,

Because it is time to rethink that transmission, both engine choices deliver fuel economy that is substantially below the niche average. The naturally aspirated version is EPA rated at 24 mpg city and 30 mpg highway. The turbo version loses but 1 mpg off each. For the week, we got right at 28 mpg.

That’s better than the fuel economy leading most folks to complain about gas prices. When we point out that fuel economy is readily available information people appear to feel entitled to their externalities, consequences of actions that are born by others. A 3-ton SUV, for example, is much more likely to kill a pedestrian, cyclist, or another motorist, all the while pumping exponentially greater volumes of lethal hydrocarbons into the atmosphere.

But, hey, blame it on the politicians, never the people who choose to purchase gas guzzlers, because climate change is just another theory, like relativity or gravity, and supply and demand is just a law that applies to someone else.

Subaru’s CrossTrek, on the one hand, is rated at 28 city/33 highway. A Toyota RAV4, now available only as a hybrid, comes in at 41 city/38 highway. The RAV4 Prime, a plug-in hybrid, allows drivers to go more than 40 miles before the hybrid system kicks in. The EPA estimates the “average” owner will get the ‘equivalent’ of 94 mpg. The plug-in RAV4 sells for roughly the same as a high-end CX-50 but is eligible for a $7,500 federal tax credit.

Mazda is late to the electrification game. Early in this process, there was talk of Toyota providing one of its hybrid systems for the CX-50, but that has since been scrubbed from the media website. Toyota cannot produce enough plug-in hybrids for its fleet, so a PHEV Mazda would seem a long shot.

On balance, there is much to like about the latest Mazda. The near-luxury interior is quite comfortable, the integration of cellular devices and the infotainment system is seamless, and, like Toyota, Mazda makes standard a full suite of driver-assist technology. Also, like Toyota, the gear works well. The car stays centered in its lane and a safe distance behind cars ahead.

It’s a handsome little SUV, staying true to Mazda’s contemporary styling cues with the addition of muscular rear quarter haunches to give it a ‘let’s play’ look. Doors and the rear liftback opening are wider than standard, making loading and unloading gear a little easier.

On the other hand, we noted that once off the smooth pavement, the CX-50’s off-road abilities make for a firm ride that probably will preclude it from becoming a favorite of Baby Boomers. A distinct lack of sound deadening material also detracts.

Some critics note that Mazda does not offer warranties as lengthy as Kia and Hyundai, which is true. At the same time, Mazda has not been forced to spend record-setting billions of dollars settling powertrain product liability issues, nor has it had to tell owners to park cars outside because the engines can spontaneously combust.

When we first heard that two of the world’s most quality-oriented automakers planned to build cars together, we expected to see special things. The inaugural CX-50 is a credible first step. We anticipate more innovation and engineering excellence in later iterations.