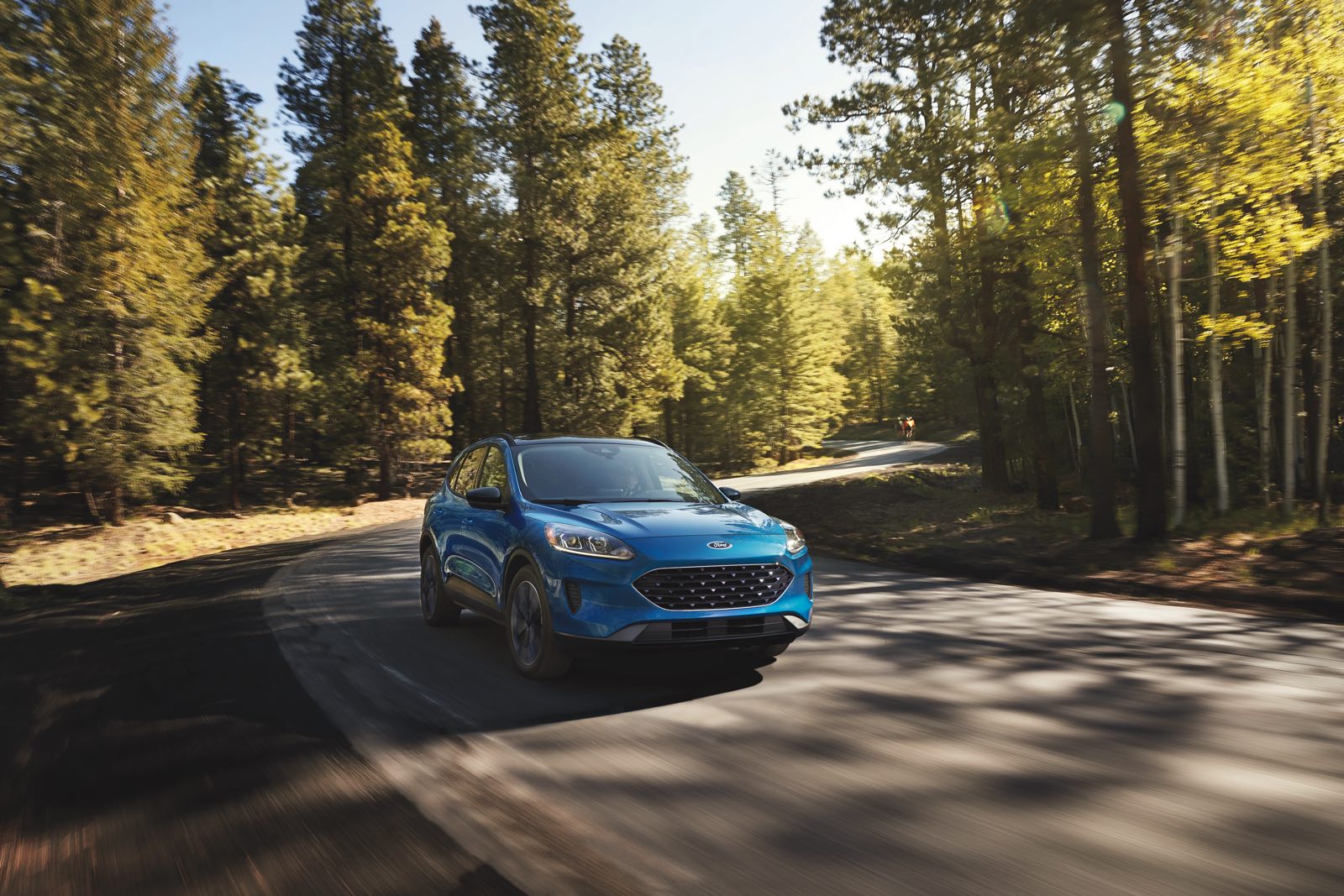 If ever judiciousness is warranted, it’s with the first car a couple buys after retirement.

Household income no longer grows incrementally with time. What is needed is a vehicle affordable enough to be paid off quickly, but also competent, reliable, and sufficiently enjoyable to meet our needs for the next decade, when a couple is likely to be more active.

Thus, it is with great care that Blonde Bride and I have spent the past 18-20 months trying to select a vehicle. With two paid-off, bullet-proof Toyotas in the garage, she and I would not need a new car if it were not for the fact that we test-drive 50 or more new ones every year.

Seat time in so many nice cars has impressed upon Blonde Beauty the immense improvement in safety created by modern driver-assist technology.

Features such as dynamic cruise control, blind-spot monitoring, and lane-keep assist make it feel like the car comes with a co-pilot who always pays attention. Multiple objective studies demonstrate that these things reduce automotive casualties by 50 percent or more. The older we get, the more we value avoiding hospitals and arduous recuperations.

Without modern safety features, we feel vulnerable, especially Blue-Eyed Bride, who prefers to leave the driving to me. After a career as a distinguished educator, she knows who is paying attention and who is not. Regarding me on this point, she has serious reservations.

I would correct her on this except, ahem, facts and events are on her side. If a career in journalism has taught me anything, it’s that knowledge is always superior to opinion. Though in my opinion, I am an amazing driver, but I must acknowledge the facts say otherwise.

Granted, I can be a dipzoid chucklehead who occasionally focuses on changing radio stations rather than the proximity of red lights and big trucks. In medicine, proximal means closer to the middle of the body, so a proximal red light is too darn close, especially for Loving and Devoted Bride, who tends to bring these things to my attention with a shriek and a slamming of the brake foot into the passenger-side floorboard.

That scares the heck out of me. I tend to shriek back. A modern car, on the other hand, slams on the brakes, centers itself in its lane or does whatever needs doing to avoid collisions. These are the things needed for the long-term survival of us and our marriage, two of the values we share.

We also want a comfortable car, one that drives well, is not too large, but still commodious enough for grandchildren, warehouse-store adventures, and explorations of the Rocky Mountains in spring, Pacific Northwest in the summer, New England in the fall, and the Florida Keys in winter.

As much as we appreciate our infallibly reliable Toyotas, both are now more than 10 years old and lack the modern safety features that Toyota now makes standard on nearly every vehicle it makes.

Now that we’re both semi-retired, we don’t put on as many miles as we once did, but we certainly want something with a proven reliability record that uses fuel judiciously.

“Hey Martha, here he goes again with another of his How-Great-Toyota-Art sermons.”

You know what? When we started this line of inquiry some 18 months ago, I was pretty sure we would land back at Robbins Toyota, with whom this family is well satisfied after buying five cars over the past decade.

Please allow a quick digression. The pragmatist in me strongly supports buying from local dealers, because when we do we also support all the people who work there. These are the people who serve on our local boards and committees, who lead scouting, who coach youth sports, and who help us finance our local governments and schools with their property taxes.

Back to the point – we did not choose Toyota. This is not because Toyota’s CEO is reluctant to dive into the production of electric vehicles, a position I understand, given the great displacement this will cause among suppliers, but also one I suspect will cause Toyota a significant loss of market share in the second half of this decade when production and sales of electric vehicles will overtake that of carbon-powered ones.

Though electric vehicles are coming – 25 new ones will drop in 2023 – they are not here yet; nor is the charging network to support them, especially in our home base of Texarkana, which does not yet have a single Level 3 public charger. There are Level 2 chargers in a few locations, but travelers need a Level 3 charger, which is 15 times faster.

In that light, then, we think the smartest play is a plug-in hybrid. These cars use a simple 110 outlet to build up enough charge to go about 40 miles. When that charge is depleted, the car switches over to a conventional gasoline-electric mode, like the one found in a Toyota Prius, first introduced in the U.S. 22 years ago. Consumer Reports says the Prius is the most reliable used car on the road.

This is hard to explain clearly, but a hybrid battery is not recharged from a wall socket. It draws its energy from regenerative braking – little generators on each wheel – and from the gas engine, which also serves as a generator.

Thus, a plug-in hybrid – PHEV in the industry jargon – gets about 40 miles on roughly 28 cents worth of electricity and then becomes a regular hybrid, in which the electric motor does all the heavy lifting and the gas engine never revs very high.

I have a 16-year-old Highlander Hybrid that never burns a drop of oil. The batteries still put out at more than 90 percent of capacity. Brand new, it got 26 mpg. It still does. It is strong, fast, and quiet. I plan to keep it as a dog-hauling, backroad-exploring, go-camping vehicle for at least another decade.

Beautiful Blonde’s garaged one-owner Camry, with less than 50,000 miles and perfect maintenance, is about to go on the market (PM me on Bluetooth).

Few PHEVs are available. Mitsubishi makes one, but friends don’t let friends buy Mitsubishis – and the nearest dealer is almost two hours away. Toyota only makes one, the RAV4 Prime, which has received robust recommendations in this space.

We ran into two problems. My friend, Susan Robbins, says she can’t get one for at least six months and my best friend, my bride, doesn’t like the RAV4. We are bigger people, and the RAV4 feels cramped. It also has a somewhat jittery ride, though the latest iteration improves on that greatly.

Hyundai and Kia make PHEVs. Despite the companies’ dreadful record with engines that catch on fire, we would consider one, but their PHEVs are only available on the East and West Coasts, not in fly-over America.

There is one other PHEV on the market, and it has a reliability record that, according to Consumer Reports, is better than the RAV4’s: The Ford Escape PHEV.

As of today, there is not one for purchase in Texarkana, where dealerships are leery of this whole EV thing; or, rather, where customers remain unconvinced. McClarty Ford has a rather nice one on order, and we may end up buying it.

Two weeks ago, we ordered one from the factory. With the help of Mike Terrell, the original no-pressure salesman, we got the lovely blue that we wanted, leather heated seats, and a kicking sound system. Best of all, it has Ford Co-Pilot360™. That includes a complete suite of driver-assist technologies, including intelligent active cruise control with stop-and-go (perfect for dealing with I-30), lane centering, speed sign recognition, and hands-free driving on more than 130,000 miles of North American Roads.

In addition to best-in-class technology, the Escape receives the highest possible scores in collision protection.

When we test-drove one, Blonde Beauty and I were impressed with the vehicle’s roominess, a function of a 2020 redesign that was lower and wider and which increased headroom, shoulder space, and hip room.

We were also surprised by the quality of the ride but should not have been. Ford initially developed the Escape with Mazda, and it still exhibits some of the ride and handling characteristics of the company that gave us zoom-zoom.

The 2.5-L four-cylinder engine is a derivative of Mazda’s L family of engines. The electrical components of the powertrain come from the Toyota Prius, so no wonder JD Powers rate the Escape’s reliability just a hair higher than the RAV4’s.

Are we in a holding pattern for our car to arrive in April? Maybe.

Last week, the Environmental Protection Agency announced it would produce rules for tax credit eligibility. If sold before Dec. 31, an Escape PHEV is eligible for up to $6,843 in federal tax credits.  It is also eligible for $3,500 from the state of Texas, which makes getting that money quite difficult.

The Escape’s battery comes from China. (Ford this week announced a new battery factory to address that issue). The federal law that takes effect Jan. 1, requires eligible vehicles to be assembled in the U.S. – good to go – and contain battery components built and sourced in the U.S., ruh-roh. Conventional wisdom is that Escape’s tax credit will be halved.

As luck would have it, McClarty Ford has on order a 2022 Escape PHEV with most of the equipment we want. If we can close the deal on that one before the 31st, it will be in our driveway on New Year’s Day.

We – and by we I mean Blonde Bride, me and the dealership – will be crunching some numbers.