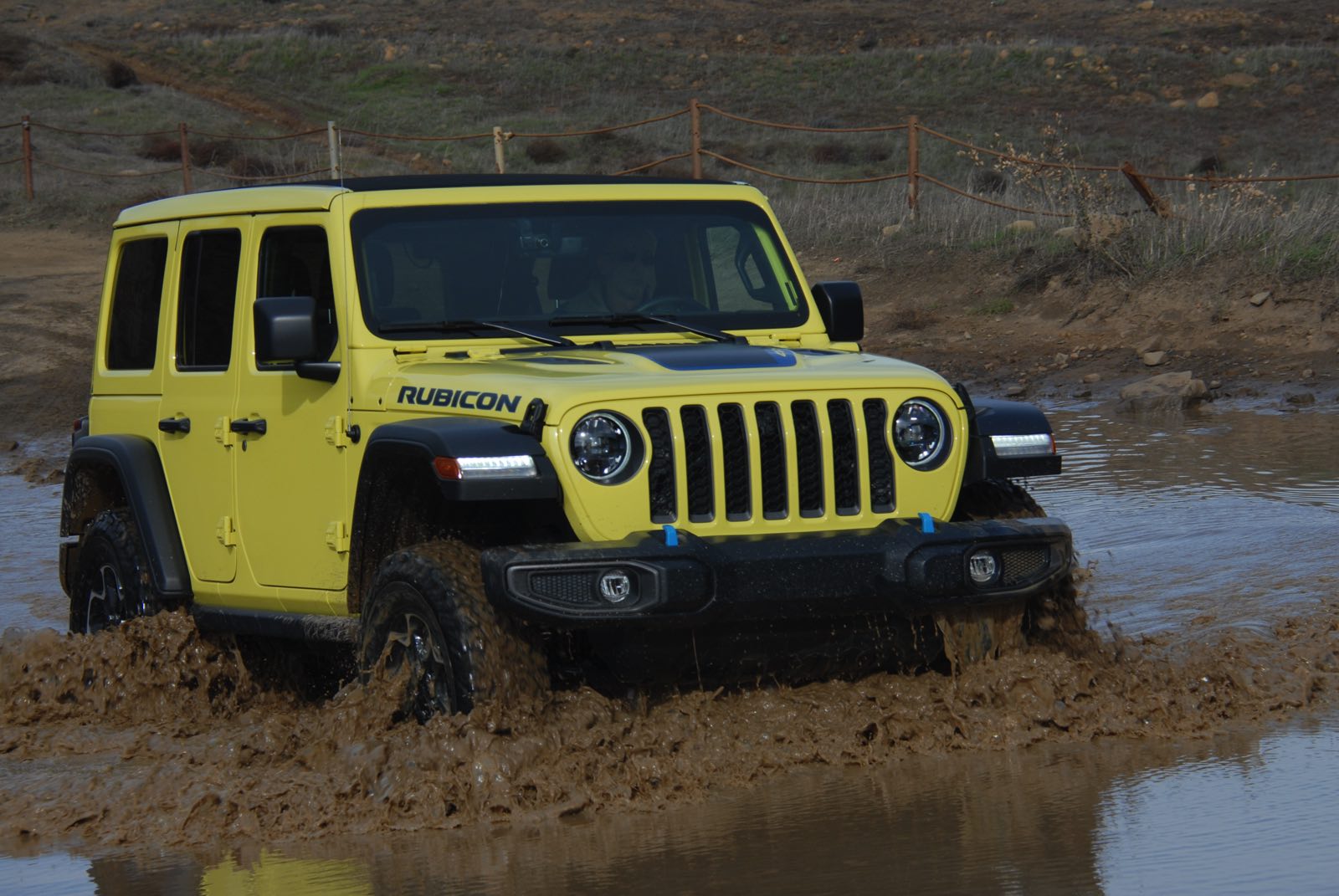 A spark of genius…or flash in the pan?

I can imagine Jeep engineers with bewildered faces given the order to electrify the Wrangler Rubicon. A Wrangler does many things but few of them are ideally suited to ultimate efficiency: Its aggressive tires will almost stop rolling on their own, the brick-profile body is the antithesis of an aircraft hull, and it weighs more than two tons.

But since the Wrangler is such a top-selling profit machine, electrify it they did…and the result works very well. Whether it works best for you depends on just one very big ‘if’.

The 4xe, the “e” carefully crafted into a plug (because Jeep Easter eggs) is offered in Willys, Sahara and Rubicon trim, four-doors only. Compared to non-xe Wranglers a 4xe does the mountain goat thing as well or better, has essentially the same cabin, roughly 90% of the cargo room, will tow 3500 pounds and feels nearly as zippy as a Rubicon 392 while trouncing the 392’s EPA 13/17 mpg. On the other hand, a 4xe adds 700 or 800 pounds, and $8750 to $9790 to the window sticker of a non-xe with the turbo-four and eight-speed automatic.

Electric motors and a 17.3-kWh li-ion battery supplement the 2.0-liter turbocharged engine and eight-speed automatic, generating peak combined output of 375 hp and 470 lb-ft of torque, the latter equaling a Rubicon 392. Plug it in overnight, or for a few hours on a level 2 charger, and you’ll have battery range averaging 21 miles; I managed 24 in good conditions (no need for AC, heat, wipers, etc.) in max-regeneration mode that included up to 73 mph on the highway.

Now here’s that big if: Once you’ve depleted the battery—or while you’re saving it for later – the 4xe garners an EPA 20 mpg combined rating, which is inferior or equal to any other Wrangler except the 392. I squeaked out 25 on my best highway leg. And over 700 miles – during which 12% was done on electricity – I  averaged 21.9 mpg with just one plug-in. The diesel was the mileage champ, and both the V-6 and 2.0 turbo match or better the 4xe gas mileage. And while I prefer a manual I’d forego it here because the 2.0 turbo – which comes only with an automatic – I find superior.

That it goes anywhere it will fit is all this Wrangler shares with the original Jeep, which was a half-foot narrower and nearly five feet shorter, so it doesn’t fit quite as many places. The first Jeep I drove had no doors, the windshield was up only to keep bugs off your face and it was iffy at anything more than 50 mph suspected—the speedometer didn’t work. This Rubicon 4xe has full doors with power windows, lighted visor mirrors (your helmet on straight, Charlie?), heated steering wheel and seats, and a power-sliding roof—there’s a ‘doors off’ mirror kit for legally going old school.

Me thinks the overlanding crowd is getting spoiled or these spend too much time at the mall.

Buried behind your left knee and the steering wheel are three buttons. Hybrid (the default) leaves efficiency to the Jeep, generally prioritizing battery use first; electric mode keeps the engine off until you run out of battery, floor the gas pedal, or ask for more urge than the electric motor alone provides, while e-save runs the engine most often and saves battery for when you want or need it. Preserve the battery for a quiet trail or the city traffic at the end of a highway commute and you’ll make the most of your energy. On the center dash is the “max-regeneration” button you should always have on (kudos to Jeep for keeping the setting on restarts) for best energy recovery and one-pedal driving.

Apart from the switchgear and some screen displays, the only difference inside is blue stitching to complement the wallpaper on the hood. Most modern conveniences are here or available, yet the seats are manual and the wind noise at West Texas speeds will remind that ‘stuff’ doesn’t equal ‘luxury’. My primary complaint is the steering wheel with far too many shiny bits where this much sun is allowed.

If you’re not going four wheeling or delivering rural mail a Wrangler is a purely emotional buy; it loses every pragmatic argument aside from size. But head for the beach, hills or mud bog and it comes into its own. Drive on gas to your trailhead or OHV park, switch to electric and you’ll enjoy a quiet trip through the forest, the seamless power adding a level of serenity to the driving and adventuring experiences.

The least expensive Willys 4xe is about $55,000, the Sahara $57,000 and the Rubicon $61,000 ($70K as tested). If you have decent electric rates or solar AND spend most of your week doing school runs, errands, and/or a short commute where it’s convenient to recharge every 20 miles (I followed/quizzed a few Wrangler owners, most of whom fit that profile), the 4xe might make sense on your spreadsheet. If that’s not you, save the money, get the non-hybrid turbo four, and get out there and four-wheel.