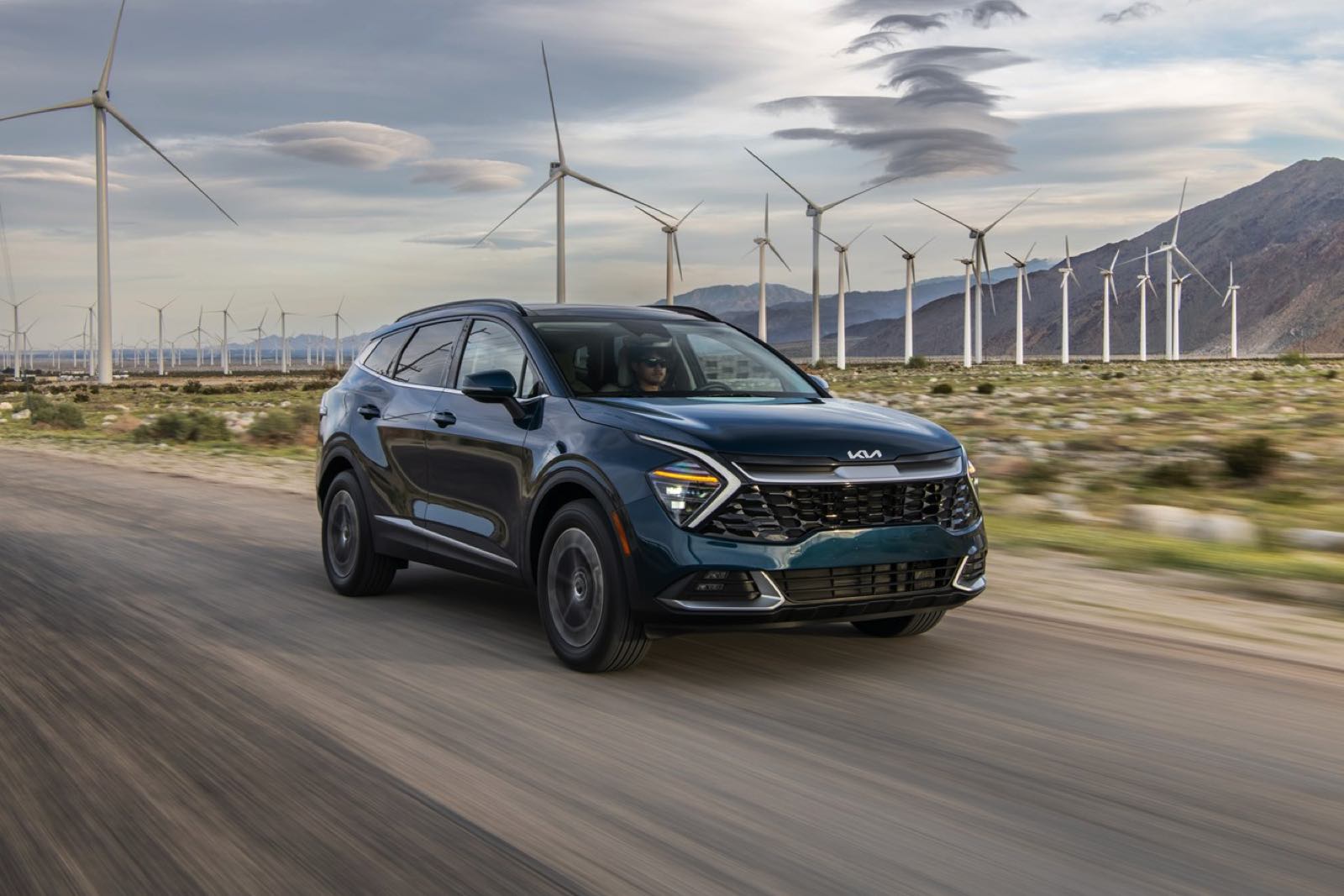 As Honda’s CR-V and Toyota’s RAV4 run rampant over these United States, the Kia Sportage has – historically – been little more than an asterisk. Sure, it has sold – and with equal certainty we’ll assume it has its fans. But even on Kia’s own showrooms it’s squeezed between the Soul below it and the Sorento and Telluride above it. With no hamsters to push it nor numerous industry awards – as bestowed on the Telluride – to adorn it, the subcompact Sportage (back when the subcompact tag meant something) has bagged the occasional buyer, but has done so almost anonymously; it’s played a bit part in a film starring DiCaprio and Pitt. With the 2023 redesign, however, the Sportage has grown in size, capability – and in its two hybrid variants – efficiency. It’s kinda’ like a Hollywood script…

If the outgoing Sportage would have seemed to sum up – at least dimensionally – the subcompact descriptive, the redesign would seem to have blown ‘subcompact’ up, both figuratively and literally. The Sportage’s overall length has grown by 7 inches, which stretches it to 183.5 inches, while its wheelbase is now on that side of 108 inches. And with the larger outside dimensions, the Sportage now boasts what Kia claims as best-in-class passenger room, 2nd row legroom and – in those Sportages not packing a hybrid battery – best-in-class cargo room. And you don’t need a tape to know this; once inside you’ll feel the space. Up front you have more shoulder room than provided by the CR-V or RAV4, while the backseat can realistically swallow three, when most subcompact crossovers work overtime to comfortably accommodate two.

In the walk-up, Kia’s design team has taken a page or two from its existing design ethos, and a page (or three…) from Star Trek’s Gene Roddenberry. What Kia dubs “Opposites United” (what if Joe Biden and Sarah Palin had a baby?) blends – according to the blurb – futuristic and rugged design elements. Most notable, and perhaps mildly disarming, is the front fascia, where Kia’s grille gets, as the copywriter puts it, “more technical with floating design.” That grille is framed by daytime running lights doing a credible interpretation of a boomerang…the Aussies, we think, will love it. And whereas previous Sportage iterations have been relatively organic, this new one is more angular, with fenders and shoulder lines all getting an edge. None of this, you should know, is off-putting; it becomes, instead, a reasonably successful effort at being distinctive.

An added benefit to the Kia’s new shape and proportion is a front end that’s pulled in relative to other front-wheel drive/all-wheel drive crossovers. I had parked the Sportage near Honda’s new HR-V during the week, and while the HR-V’s sheetmetal is clean, the front overhang – that portion of the sheetmetal ahead of the front axle – could store a loveseat. In contrast, the Sportage almost boasts a rear-wheel drive proportion, just like your friend’s X3. You know, the friend that does well…

Inside, an of-this-century dash is complemented – in our test EX trim – by a 12.3-inch touchscreen, a heated and leather-wrapped steering wheel and SynTex (not to be confused with the Sin Tax) perforated upholstery. You’ll also enjoy the nanny aids that people of all ages increasingly regard as mandatory: blind-spot collision avoidance, rear cross-traffic collision avoidance and safe exit warning. And while initially skeptical of anything with the ‘nanny’ adjective, with today’s traffic and inattentive drivers I’m beginning to see their value.

While the base Sportage comes with a non-descript 2.5 liter four with 187 horsepower and a highway EPA estimate of 32 (in front-wheel drive form), our test hybrid ups that significantly with 1.6 liters of turbocharged four delivering 227 horsepower and 258 lb-ft of torque, along with – of course! – the hybrid bonus. The result is genuine responsiveness, with an EPA estimate of 38 City/38 Hwy and 38 Combined. And that’s stunning, given the genuine utility offered by the Sportage footprint, available all-wheel drive and – ya’ ready for it? – a center-locking differential.

Behind the wheel, most of what you’ll feel is benign. The suspension is composed and comfortable, while steering and braking generally conform to what crossover buyers want; you’ll not do trackdays in the new Sportage, but with 2,000 pounds of towing capacity you can tow a track bike – to, you know, the track.  Or take a side-by-side ATV to your offroad park.

In far more available trims than time or tenacity allow, the Sportage EX hybrid with all-wheel drive would seem to be a sweet spot, and the folks at Car and Driver agree. With the available Premium package, which gives you a panoramic sunroof and smart power liftgate, you’re in at under $34K. And again, that’s 38 smiles per gallon.

This Kia’s days as little more than an asterisk may have ended.

Jeep’s Wrangler 4xe: A spark of genius…or flash in the pan?
BUYING NOW? The Shoe’s On The Other Foot
Event Calendar